THERE was a school at Forres in the Highlands of Scotland, which is a model for Canada today. It was a school for adventurers, founded by a returned governor of the Honorable East India Company.

All about lay the brooding peace of Highland hills, but even with the softest whisper there came disturbing footsteps of some old Argonaut.

“Keep the fighting pups going,” was the parting admonition of the founder. Then, as a sort of benediction, he breathed into the school his own adventurous spirit.

Forres was a little place and that was long ago, but we cannot forget its name because of its men. Settlers for the colonies, soldiers for the army, sailors for the navy, bankers for England, explorers for the world, went forth from Forres. Donald Smith, who afterwards became Lord

Strathcona, was only one of its many illustrious sons. We know little of the schoolmaster in that humble seat of learning, but we suspect that he, too, was one of the restless brood, ex-sergeant of the Royals perchance; a body broken from long service how chained him to a droning desk, but the soul of him remained that of a wanderer.

He taught his geography with moving pictures of a kilted regiment, following Britain’s drum-beat round the world. He taught his history with living words like “Ticonderoga,” “Fontenoy,” and “Quatre Bras.”

With the blood of the Gael in his veins, he was partial to the voice of the pipe and the bard. Against him, it must be admitted that often the drier subjects of the curriculum were crowded out by the hour of song and story.

THAT little school at Forres qualified more lads for the gypsy trail than for the college cloister. From the point of view of the pedant and the doctrinaire it was a dismal failure.

From the point of view of Empire builders, that faroff Highland school outshines a host of cramming-mills of a parrot civilization.

I suppose that we must always have our bespectacled bookworms as prize exhibits of the musty study. But the plungers, the pathfinders, and the adventurers are a thousand times more what Canada is needing for the opening-up and for the development of her vast untouched resources.

Who does not feel a sneaking sympathy for the ne’erdo-well kicked out of home for the sake of peace at home? What is that young Bobby Clive, carving his name on the church steeple, outraging parish and vicar, what but the forerunner of Lord Clive who “extended the Indian

“The School for Adventurers is a school for perennial youth. When the settled'down type is prematurely old in its teens, the striving dreamer cheats old age to the very end."

A wee\ or two after he had penned these lines, Arthur Hunt Chute, winging his way A(orth in search of adventure, met Death On September 22, an airplane in which he and two companions were travelling, crashed into La\e Manitoba. He was to the end a pupil of The School for Adventurers.

Empire from Cape Comorin to the eternal snows of the Himalayas?”

Despite shocked expressions of profaned decorum, these irresistibles of fire and storm must be included among the true enlargers of a nation. The name of the errant one may not be popular at the curate-and-teaparty gathering; nevertheless his spirit, L ursting from established confines, is a mighty part of pioneering story.

Much has been spoken in praise of Pilgrim Fathers who left old England and went abroad to worship God. Without irreverence, much might also be uttered in

praise of youth incorrigible, which fared forth not to worship God but to raise the devil.

The School for Adventurers is a school for perennial youth. When the settled-down type is prematurely old in its teens, the striving dreamer cheats old age to the very end.

David Thompson, explorer of the North West Company, quenchless in expectancy, seeking ever for that something lost beyond the ranges, was younger at sixty than many a just-so lad of twenty. Years cannot subdue the soul that cries: “I must drink life to the lees.”

At least for a century to come, Ulysses must remain a patron saint for the schoolboys of our great Dominion.

It’s all right to talk about how Van Horne used to blow the top off a mountain. We can still match that brave stuff in the living present with pictures like that of Harry McLean laying his mile and a half of track per day over the frozen muskeg in forty below weather along the road to Flin Flon.

Those who keep their eye upon the dream edge of our map soon come to realize that our heroic age is not in the past, but in the present, and in a still more stirring future. International Nickel’s billion-dollar (»rporation is, perhaps, only a foretaste of what is waiting in our treasurehouse of metals.

OTHERS may talk of what their sires have done.

Our greatest tasks are yet to do. For us, the hardest, and perhaps the richest portion of this continent, remains to be subdued.

The completion of the Hudson Bay Railway this year far from being an ending, is proving to be merely a beginning. A vaster vision is already looming up upon our northern skyline—the vision of a transcontinental from Churchill on Hudson Bay across the new empire of the north, through the Peace River Pass, and on to the Pacific.

With only the corners of her Promised Land as yet possessed, Canada cannot afford to teach a love of softness. If we are to become worthy of our proudest title, “the True North strong and free,” it will be because no siren song could turn us from that strife which is the law of life.

This Canada of ours must continue to maintain its School for Adventurers. Continual watchfulness is needful lest the primal virtues be obscured by the Slick Alecs of the market place. Our ideal is not money grubbers; our ideal is rather a Breed of Manly Men. Hence the Argonauts and not the Shylocks are our mentors. 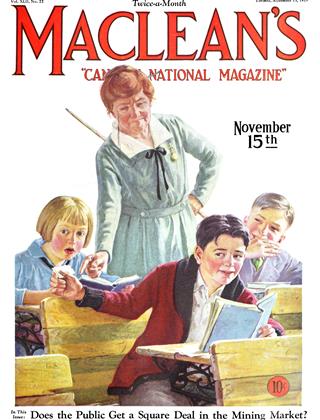