PEANUTS, perhaps the humblest member of the nut tribe, but none the less the most popular, are being used in constantly increasing quantities. This is not the result of “more and bigger baseball matches” or a greater attendance at the circus. It is rather a matter of increased appreciation, on the part of the housekeepers of the country, for the cheap and useful peanut, obtainable at all seasons of the year.

Roasted, toasted, or in the form of peanut butter— the beloved spread of childhood—peanuts can be turned to a great variety of uses. There is practically no course in the ordinary meal in which the peanut cannot be featured. As accessories to sweet dishes and candies they are widely appreciated; roasted peanuts in a nut loaf replace meat; peanut butter can be used to make a very nutritious and tempting cream soup, or as a shortening in a loaf that makes an excellent addition to our breads, especially for sandwiches or to serve with a salad. And this ground is not generally familiar.

Melt the butter, blend in the flour smoothly and very gradually, add half of the milk, continuing to stir constantly until the mixture thickens smoothly. Add the remaining half of the milk, and cook in the double boiler until serving time.

Have ready a mixture of the seasonings, peanut butter, and the three tablespoonfuls of cold milk, mixed to a smooth paste; just before the soup is to be served, stir this mixture into it and beat with a rotary egg-beater until it is hot again. Serve with croûtons.

After picking over and washing the rice well, cook it in a double boiler with the water and salt. When tender, drain—there should be three cupfuls—and combine with the other ingredients. Turn the well-blended mixture into a buttered loaf pan and bake in a moderate oven, 375 deg. Fahr., thirty to forty minutes. Serve hot with a well-flavored Tomato Sauce.

1 Cupful of strained 1 Slice of onion tomato juice Bit of bay leaf Y\ Teaspoonful of sugar Blend the fat and flour in a saucepan; in another pan have ready the tomato juice, stewed for some little time with all the seasonings; strain this and stir it into the first mixture, continuing to stir until it cooks thick and smooth.

Boil or bake sweet potatoes, mash them and beat in the cream, milk and seasonings; when well blended and light, add the peanuts and the slightly beaten egg or yolk. Turn into a deep soup plate or layer cake pan and allow to cool sufficiently to enable you to cut the mixture in long narrow blocks which you can easily shape into cylinders; dredge the shaped croquettes lightly with flour, dip in diluted slightly beaten egg, then in very fine cracker crumbs seasoned with salt and pepper. Arrange in frying basket and lower into hot deep fat—375 deg. Fahr.—and fry to a rich golden brown.

Rub the brown skin from the peanuts and chop them fine. Beat egg whites until fluffy, gradually beat in sugar, and when stiff, add the flour, cornstarch and salt, and fold in thenutmeats. Drop from a spoon on greased paper on a wooden board or baking sheet or inverted pan, and bake in a slow oven until golden brown.

2 Cupfuls of flour 1 Teaspoonful of salt

Mix dry ingredients and sift them together; blend the milk smoothly into the peanut butter, then add to dry ingredients and beat vigorously. Turn into a greased loaf pan and bake in moderate oven for about forty-five minutes. Should not be cut for twenty-four hours. Try it for sandwiches or with salad, when cheese, fruit or vegetables are being used.

Cut the chocolate fine and set it over hot water, being careful to keep water below boiling-point. When the chocolate begins to melt, remove the inner pan from the hot water and beat and work the chocolate until it is all of even temperature, about '80 deg. Fahr. This will mean that if you touch it with a normal finger-tip the chocolate will feel about the same heat. Dip a teaspoonful of peanuts at a time into the chocolate, and slip the coated cluster off the spoon on to wax paper. It will be necessary to set the pan of chocolate over the warm water occasionally, to keep it at the right temperature for dipping.

Cream the peanut butter and the sugar very thoroughly. Beat the eggs, combine with the milk, and add alternately with the well-mixed and sifted dry ingredients. Add the flavoring and peanuts, their brown skins removed. Pack the dough into a long, narrow loaf pan and chill for several hours or overnight. With a very sharp knife slice the molded dough thinly. Bake in a hot oven, 450 deg. Fahr., eight to ten minutes.

Sift the flour, salt and baking powder together. Cream the butter well, work the sugar into it, add the well-beaten egg, and then alternately the flour and milk. Add the peanuts, and drop from a spoon on buttered baking sheet, keeping them well apart as they will spread considerably in cooking. Sprinkle with currants—which have been well washed and dried—over the surface. Bake in a hot oven, 425 deg. Fahr.

Wash and pit the dates, and into the cavity of each press a peanut—its brown skin removed—or if you are using the fondant, insert a little of it first and then press in the peanut. Roll the dates in granulated sugar.

Remove the brown skins from the peanuts; put them in a fine-mesh frying basket or sieve, and immerse in deep hot vegetable oil, 375 deg. Fahr. Shake gently while cooking, taking care not to spark the hot fat, and when the nuts are evenly browned but not at all dark, remove them from the fat—they will become consider-

ably darker after their removal on account of the heat that is still in them. Place in a bag with half teaspoonful of fine salt and shake well.

Put sugar, milk and cocoa to cook in saucepan and boil to 238 deg. Fahr., or until a few drops in cold water will form a soft ball. Remove from the fire, add butter and canned pineapple juice, and beat for two or three minutes. Allow to stand until quite cool, then add peanuts, and beat mixture until creamy and obviously ready to harden. Press into buttered pan and mark into squares.

Cream shortening well and gradually work in sugar; add well-beaten egg yolks; mix and sift the dry ingredients and add, alternately with the milk, to the first mixture; add vanilla. Turn into buttered and floured layer cake pans and bake in a moderate oven 375 deg. Fahr.

Cool the cakes and put them together with a cooked raisin filling thickened with a little cornstarch. Over the top spread boiled frosting:

Put sugar, water and cream of tartar in a saucepan and cook slowly, stirring until sugar is dissolved; do not stir any more while syrup cooks until a few drops will form a soft ball in cold water, 240 deg. Fahr. While cooking, watch for crystals on the side of the pan and wash them down immediately to prevent the icing from becoming grainy. Allow the syrup to cool until it stops bubbling, then pour it into stiffly beaten egg whites and beat vigorously until of spreading consistency. Add the vanilla and spread roughly over the cake, using the back of a spoon.

Peanuts, like almonds, are at their best for use on a cake frosting if they are first chopped roughly and toasted to a rich brown in the oven. They may be sprinkled over the entire surface of the cake or dusted on a section here and there, as shown in our illustration. 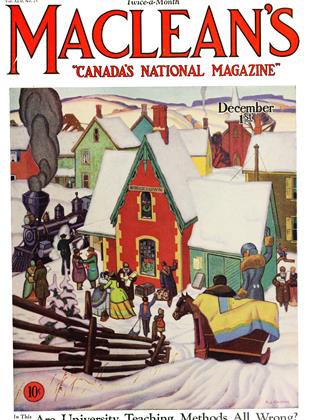