SCIENCE, backed by Christmas seals, is winning a great struggle. The story of the fight against tuberculosis in this country during the past thirty years is one of those chronicles of

quiet, steadfast courage which reveals the true high purpose of all that is best in the science of medicine. Science seldom reaches out its hand to the public unless there is a worthy cause, and surely no more gallant crusade has ever justified the appeal to the public for funds than the conquest of tuberculosis.

Look at what has been accomplished in Canada. These grim figures, though they deal with death, are enough to stir the imagination. Canada had a death rate from tuberculosis in 1900 of 180 in every 100,000 of population, with less than fifty hospital beds for the treatment of such cases. Last year the Canadian death rate from tuberculosis was 81.6 per 100,000 and there were 5,600 sanatorium beds for tubercular cases.

And this year a little blue sticker with the figure of a medieval bell ringer is offered to the public again at Christmastime, not only as a means of raising funds to carry on this winning fight against tuberculosis but also as a reminder of the tirelessness of the effort. The Christmas seal has become a symbol of the campaign for health, particularly among the young where this disease is so prevalent.

To a very large extent this is a campaign for the saving of the life of youth, for the large majority of deaths from tuberculosis occur between the ages of fifteen and twenty-four—the happiest years of human life. And strangely enough, fifty per cent more girls die in this age group than boys. This is one of the problems the Canadian Tuberculosis Association is attempting to solve by means of education. Through the schools and homes by means of lecture and pamphlet the regular medical examination of children in'the adolescent stages is urged.

It would appear that victory in the fight is just beyond the horizon, but the crusade is measured in terms of decades. The campaign of thirty years has brought us only to the point where the statistics of improvements begin to assume impressive proportions. While looking to the future, medical science is not forgetting that six hundred Canadian youths are lost to Canada every year through the ravages of the white plague. If it was possible to visualize six hundred Canadian children in a great sunny playground shouting and romping, with sturdy limbs and bright, clear eyes; then to visualize them swept away by a great plague and lost to their parents and their country, perhaps the awful significance of tuberculosis could be partially understood.

These are things to be recalled when the little blue seals with the double-barred cross in red are offered this year for the decoration of your Christmas gifts.

THE story of the Christmas seal is interesting in itself. On a Christmas Eve nearly thirty years ago a postal clerk, in Denmark was toiling over the heavy

mails, and being a man whose Christmas spirit could not be extinguished by hard work, he evolved a scheme by which the sender of a message could not only extend greetings to his friends and relatives but make a true Christmas gesture by contributing to a hospital for tubercular children. Here was the beginning of the health message by means of the seal. In 1907, Miss Emily P. Bissell, a Red Cross worker in Wilmington, Delaware, read of this scheme, and applied it in the interests of a small tuberculosis sanatorium in which she worked and which was in financial difficulties. Using the Danish idea she raised $3,000, and the next year the American Red Cross made a nationwide drive. Y ear by year the sale of seals increased, and during the eighteen years $366,000,000 were raised in the United States and Canada in the interests of anti-tuberculosis work.

Some Achievements of the C.T.A.

rT"'HE Canadian Tuberculosis Association has worked along parallel lines with the organization in the United States, using the same designs for their seals, but having the printing done in Canada. The scope of the effort was limited until 1927, when a coast-to-coast drive was made for the sale of seals and 30,000,000 were printed and $85,000 secured for local committees to use in the work. This year 70,000,000 seals will be distributed, and it is expected that $250,000 will be raised for the crusade.

The funds secured in 1927 and 1928 have been spent in the following manner:

A public health nursing service has been established in each of nine centres.

A travelling clinic which made 2,000 examinations was financed.

One new health camp was established.

The health camps are a particularly interesting phase of the anti-tubercular work. The Canadian Association has done much work along these lines by arousing in communities an interest in the importance of July and August camps for children who are tired by school effort and who come from homes having tuberculosis.

C^ASE histories are perhaps the most striking examples of the actual field work carried on. Here are five cases.

Mother sent to sanatorium with active tuberculosis. Father in general hospital recovering slowly from operation. Mother’s improvement greatly hindered by worry over her four children. Nurse arranged with mother to visit children in orphanage where they had been placed, and had them all examined at the clinic. Three proved to be all right but are being kept under supervision by the nurse and examined at intervals. The baby was found to be very much underweight and showed some symptoms of disease. Was placed in preventorium where he has made splendid progress and is about to be discharged as cured. The mother, her mind relieved of anxiety about her children, is showing marked improvement.

Mother died in sanatorium of advanced tuberculosis. The nurse visited the home to see the three children, who were in care of the grandmother. Latter said children were all right and she saw no need for examination. After several visits, the nurse persuaded her to let her take the children to the clinic. One was found to have a tubercular hip, and was placed in preventorium where the condition is improving. The second child, below par and undernourished, was placed in preventorium, and has since been returned to home in normal health. The third child was found to be a well-developed case of tuberculosis and has since died.

Mother of this family died of cancer a year ago, leaving a family of nine children, the oldest a girl of seventeen. She assumed the duties of housekeeper, but the strain proved too much for her and she broke down. When she was examined, she was found to be tubercular and was advised to go into the sanatorium for a period of treatment. As the sanatorium was full, she was obliged to wait three months for a bed. During this time the clinic nurse visited the home regularly and helped her to look after herself, so that her condition would not become worse. The other children, upon examination, proved to be all right with the exception of Bobby, aged five, who was thin and underweight. Nothing definite seemed wrong, but he made no progress, and therefore, on advice of the clinic doctor, was placed in preventorium where he has gained in weight and improved greatly. The other children are still being examined regularly and watched to see that no further disease develops among them. The eldest girl is now convalescent in the sanatorium and will probably be restored to her family in good health shortly.

Father died of tuberculosis some time ago. Mother examined later and found to have tuberculosis; placed in sanatorium; would not allow children to be examined, however, though clinic nurse offered to bring them all in for examination and supervision. After she had been in sanatorium some time, movies were shown, illustrating spread of disease among contacts. She changed her mind and became very anxious to have her children brought to the clinic. Nurse arranged to have the two children examined and both were found to have suspicious symptoms, although not showing any active disease. Condition explained to mother, and that watchfulness and good care would probably protect them from the disease. They are being supervised regularly by the nurse and examined at regular intervals to ensure against the development of the disease.

Girl of eighteen brought to sanatorium with tuberculosis. Nurse visited home, as four children had been in close contact with patient. All examined at clinic. One girl, ten years, found to have tubercular hip; boy of eight found to have tuberculosis infection; both placed in preventorium. Girl still there but improving, boy returned home as normal, having gained in health and weight, and is now going to school. Other two children being kept under supervision and examined at intervals to ensure against the development of the disease. 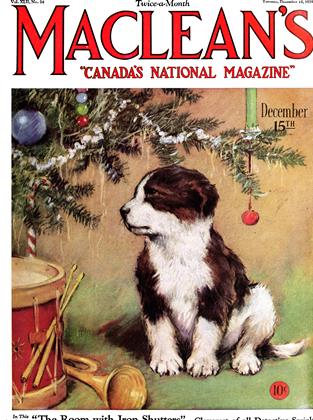