THERE is no doubt that paint is the shining way toward economical home beauty. If I needed further confirmation of this opinion I have received it from my friends, Elizabeth and Bill, who, with only $300, and through the magic medium of paint and an intelligent and harmonious use of colors, have made their apartment a place of beauty.

“I suppose Bill and I were rather foolish to get married before we had anything saved up,” said Elizabeth, as she proudly showed me about her little place; “but it is great fun keeping house together. All we had for furnishing was $300. Dad gave me $200 and a lot of good advice, and Bill sold his old car for $100.”

I found it difficult to believe that the beautiful furnishings could have been purchased for so little, but Elizabeth told me the price of each article and yard of material, and figures cannot be gainsaid. Of course, no value was put upon the work involved in painting, making curtains and cushions, and as this was regarded as a labor of love, it cannot be measured in dollars and cents. Elizabeth assures me that the satisfaction of seeing the result of the work of their hands has amply repaid them. She says that after painting the first piece of furniture which turned out satisfactorily, she found the work perfectly fascinating, and could hardly be dragged from it to eat or sleep.

HER method of procedure was to place the furniture in the room first in its “raw” condition, and then to plan the colors for the whole room before commencing to paint. When this is done, she claims, it is much easier to visualize the result of color contrasts.

As a guide for their work, Bill drew a color wheel according to the circular chart reproduced with this article. He had taken a short course in art in his salad days which stood him in good stead in this painting adventure, because he had learned the value of color composition and contrasts, and the method of toning down the vivid colors to varying hues or shades.

You will see from the wheel that the colors meet in the centre in pure gray. Bill informs me that if it were possible to mix pure pigments of the colors surrounding it in exactly the right amounts, gray would be the result. This explains why gray in some form is so much more satisfactory than white as a blending hue in woodwork and curtains; there is a bit of all colors in it.

In the color wheel, the complementary colors are opposite one another. Bill made some wonderful combinations by mixing blue with orange which gave the

tint known as Copenhagen. He next tried combining colors of adjoining hues. Strong colors in green and blue paint when combined made a rich peacock blue, while a deep green and a light blue made a tint that is a bluish jade sometimes called crushed turquoise. He gave me quite a dissertation on what makes color right, whether for vivid or softtoned expressions.

It is very interesting to work out these color harmonies, and really very valuable to be able to apply the resulting knowledge to everything in the house, including one’s wardrobe. If, for instance, one has a living-room with a southern exposure and a plentiful supply of windows, blue would be a satisfactory color to use because it is light-absorbing. The color complement for blue of varying shades ranges from vivid orange to êcru. In a room less happily situated for color, yellow might be the key color with blue or purple-blue for accessories.

Elizabeth and Bill painted the furniture for their living-room, which was exceedingly sunny, in a soft blue with touches of yellow and black. Elizabeth told me that she was a bit discouraged when she began to work on the furniture because that happened to be just the moment chosen by the people who had taken a large apartment above them to bring in some new walnut furniture which she earnestly desired for her own place. “But, do you know,” she continued, “that furniture does not suit their apartment as well as our painted pieces do this place; so you see it is to our advantage in every way that inability to spend much money set our wits to work.

As a rule it is not good practice to use the keycolor of a room on the walls. For example, a blue living-room is more effective with cream, buff or ivory walls. Elizabeth and Bill chose êcru as a desirable background. They were fortunate in obtaining an apartment which had not been previously papered, and for which they were permitted a choice of color. For the windows of this room they used blue curtains of sunfast cotton material with a pattern in harmonizing contrast. The rug selected for the floor was a small square of taupe broad-loom which was charming with the painted furniture. At present this room has two Windsor chairs, a Jenny Lind day bed and two wicker chairs cushioned in

black and yellow cretonne, which is washable and sunfast, bookshelves, a gate-leg table, a tilt-top table and a magazine rack. The money cost of this furniture was $75.

The bedroom was especially lovely. It was done in silver and rose-color. The walls were covered with a pale gray paper with a small raised pattern in a silver tone. The colonial bed and the other furniture were painted a pale gray with rose trimmings. India print in harmonizing colors made a most attractive bedspread and was in keeping with the black Numdah rug sprinkled with rose flowers. Curtains in sunfast rose voile made a perfect finish.

BILL painted the bathroom and made inh nf it. TTP USPH ímnlfi-ereen Daint (

job of it. He used apple-green paint on the walls, halfway up above which was a paper with a pale buff ground and a fanciful decoration in green and gold. An ivory-colored moulding separated the paint from the paper. All the woodwork, the medicine cupboard and the chair, as well as the outside of all the porcelain pieces, were painted in the same color of green. Elizabeth made marquisette curtains also in green for the casement windows, and chose a green and buff mat for the floor. When they told me how they had decorated the bathroom, I was afraid that they had used too much of one color, but that was bef ore I had seen the crisp, cool and entirely satisfying effect.

The painting of woodwork in gay colors is a most attractive innovation. Woodwork is being more and more treated as part of the wall decoration and not as an essential part of the building. When it is painted the same color as the walls,the effect is always smarter and more restful than when a white or dark color is used.

Blue and gray oilcloth, blue and white checked gingham curtains, and tin containers painted yellow with blue stripes made the tiny kitchen an inspiring place to minister to the department of the interior. A little less than $20 was paid for the foregoing and for a kitchen table and chair in addition.

Fatigue and the constant smell of paint may have been responsible for the sudden decision of the painting committee to make a change in their method of decoration when they undertook the finishing of the furniture for the breakfast room. Here walnut stain was used for all the furniture, after which wax and elbow grease were applied vigorously, with telling effect. A taupe rug of the same type as that in the living-room was used for this room, and smart chintz curtains in blue, yellow and green, gay dishes; a Chinese-blue cloth and bright yellow bowl for the fable supplied the necessary color.

The most expensive piece for the breakfast room was the Welsh dresser which cost $34.50. Four chairs at $1.25 each

and a pull-out extension table at $10.95, brought the expense of this furniture to

After the furniture was paid for, there was balance enough now left for rugs, springs, mattress, and other accessories. It seems incredible that all this beauty could be had at so small a cost as $300, but as I remarked before, figures cannot be gainsaid.

The friendly ministration of transforming color is not, of course, confined to unfinished furniture. It is possible through the medium of paint to make “sets” from unrelated pieces of furniture, some of which are quite nondescript in character.

An instance of this I saw last summer in a country cottage, to which had been

brought an old farmhouse corner cupboard, a yellow oak chest of drawers, a cheap drop-leaf kitchen table and a few kitchen chairs, which were to serve as dining-room furniture. I am sorry that I was not able to take “before and after” pictures of these pieces, the contrast was so great. This particular dining room was very bright, so a good deal of black paint was used. The cupboard was painted black on the outside, with peacock blue on the shelves and lining which were visible behind the glass door. The chest of drawers was also painted black, with the interior and knobs for the drawers done

in the peacock shade. The kitchen table was painted blue with a two-inch band of black around the edge and black touches on the legs. The chairs were especially lovely in black with a decoration across the broad part of the back, which included the bright colors of the china in the cupboard. With chintz curtains in blue, black and gold the dining room was really lovely, while the cost was practically negligible.

With Spring just around the corner, it is heartening to know that anyone can have beautiful home interiors at little cost, and sometimes just for the painting! 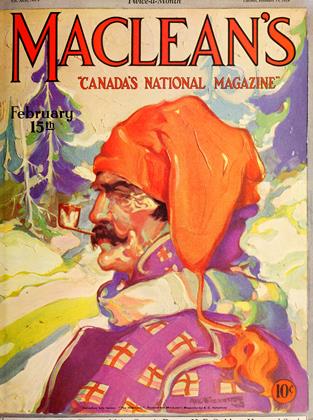