CROQUETTES, if they are well made, deserve to be given the place of honor as the main dish of a carefully planned meal. Given the opportunity, they will lend distinction to the menu and will tempt equally the finicky appetite or the hearty zest for what is good to eat. To think of croquettes first as a means of using up some unimportant leftover, is to insult them. They should be a matter of real design, given their place on the strength of their own merit; that they will pick up leftover cooked meat or poultry or fish, is to their greater credit; that thrift may be served while you are achieving a delicate variation from more stolid foods, is an added satisfaction.

Anyone can make truly delicious croquettes if she will realize their simple basis and later give thought to the delicate seasoning and the careful frying of the mixtures.

Thick Sauce the Base

THE basis for the most delicious type of croquettes is a very thick sauce—a much thicker mixture than we use for almost any other purpose. It calls for one-quarter of a cupful of flour or even in some cases one-third of a cupful of flour, to a cupful of liquid double or more the amount of thickening put into an ordinary cream sauce.

This basic sauce can be either the plain white sauce of common usage, or a rich brown sauce that would be very savory with certain meats, or a piquant tomato sauce; whichever of these is elected for its flavor, it must be the very thick sauce designed for croquette making.

Into this sauce are mixed the solids which are to finish giving the croquette its character. To a cup of the thick sauce we add a cup of chopped cooked meat or poultry or fish which has been flaked carefully and freed from skin and bones.

The seasonings will be chosen to accord with the main ingredients; salt and pepper; celery salt and onion salt; finely minced onion or its juice; celery put through the chopper or cut very fine; parsley or the merest dash of some of the savory herbs, or a sprinkle of spice; green pepper, finely minced or a little pimento; a dash of lemon juice or grated rind; any of the bottled sauces that would add a desirable flavor.

Instead of the sauce, a mashed or riced potato basis is often used for croquettes. This makes a croquette of rather sturdier type and easier to handle but it is not quite the delicate morsel that is made by the other method. I shall give you a recipe for Potato Croquettes which you can use as a basis for various mixtures.

The shaping of the croquettes is an art which develops with experience. The potato croquette is the easier type to shape; the mixture can be turned out on a cutting board and cut and patted into a cylinder shape with two spatulas or knives; the coating is then easily managed.

To shape the croquette which is made with a sauce base, it is very necessary to be quite sure that the mixture is as firmly set as possible beforehand. It is well to make the sauce and combine it with the other ingredients early in the day, then pour into a deep plate, such as a cake pan or soup plate, and put in a cold place so that the mixture will set quite firmly. You can then shape it with a couple of tablespoons or in the same fashion as the potato croquettes, using two knives to pat it into form on your cutting-board.

The frying of your croquettes is very important. Properly speaking, they should be immersed in deep hot fat, but sometimes they may be sauted with as much care as possible. In the case of the croquette with potato base, it can be shaped in a flat cake and sautèd in the ordinary manner.

Deep frying will give very delicious results. If possible, have a proper French frying-basket—simply a longhandled basket of coarse wire mesh which will fit into a straight-sided pot of the right depth to carry it. You can arrange your croquettes in this frying-basket, bring the fat in your saucepan to the right temperature, and lower the basket into it; it is just as easy to raise it and drain the croquettes when they have finished cooking.

A fat thermometer is a great help, but if you must arrive at your correct frying temperature without one, cut some half-inch cubes of bread and when these will brown in your fat in forty seconds, you can assume that the temperature of the fat is about right. Do not overlook the fact that when you plunge your basketful of cold croquettes into the fat, you sharply lower its temperature, so you should use a strong fire for a few minutes to bring it up again ; it’s a good plan to have the fat rather hotter than you will want it for the cooking period, before putting in the cold food.

The first three recipes I shall give you will form a basis for any number of kinds of croquettes.

Melt the butter, remove from the heat and blend in the flour and seasoning; add the milk slowly, a little at a time, stirring until the mixture is quite smooth after each addition. Put over the fire—a double boiler is safest—and stir constantly until the mixture is very thick —about ten minutes; you can then allow it to cook over the hot water without further stirring for another ten minutes.

Melt the butter, toss in the finely chopped onion and fry for a few minutes without browning. Carefully drain out the onion, then blend the flour into the savory butter. The use of more flour in a brown sauce is necessary because the browning takes away from its thickening qualities.

Mix the seasonings in well and slowly add the liquid, stirring to make the mixture quite smooth. Put over the fire and stir constantly until the sauce is very thick—about ten minutes—cook as long again over boiling water.

Add the seasonings, butter and slightly beaten egg, to the hot potato. Beat very light. Allow the mixture to cool, then shape croquettes as desired. Roll in very fine dried crumbs which have been seasoned with a little salt and pepper, dip in egg which has been slightly beaten and diluted with a little water, then coat with the seasoned crumbs again and fry in hot, deep fat (375 deg. Fahr.) to a deep golden brown.

Any canned or cold cooked fish may be combined with Potato Croquette mixture just given, to make delicious fish croquettes. If you are using leftover cooked fish, flake it with a silver fork and remove all bones and skin. If using dried codfish, freshen it first.

Allow about half as much fish as you have potato mixture.

Any meat of fairly distinctive flavor may be chopped and combined with Potato Croquette mixture—cold corn beef, roast beef, lamb, ham or roast pork; a dash of some special seasoning may always be used on the meat before adding it to the potato—Worcestershire sauce, a slight sprinkle of mustard, or other condiment. Whip the finely chopped meat into the potatoes and finish as Potato Croquettes.

Make one cupful of the thick white sauce given above. Add the chopped chicken and seasonings. Turn the mixture into a rather deep dish, like a soup plate or cake pan, and allow it to cool and to set thoroughly. Shape with two tablespoons or in the form of cylinders, dip in very fine crumbs seasoned with a little salt and pepper, then in slightly beaten and diluted egg and coat finally with the crumbs. Fry in deep, hot fat. Drain on crumpled absorbent paper.

Make the sauce as instructed in the basic recipe and add to it the flaked lobster meat or the shrimp; if using the latter, be sure to remove the little black threadlike part you will notice on each shrimp. Then break the fish roughly and combine with the sauce and seasonings. Cool in a deep plate, shape, crumb the surface and fry as directed for Chicken Croquettes.

Flaked tuna fish or cooked or canned salmon or any leftover cooked fish may be used instead of the lobster or shrimp in this type of croquette.

Veal croquettes, if carefully made, will be almost the equal of the delicate Chicken Croquette.

Make the usual thick cream sauce, add the meat and seasonings, turn into a deep plate to cool and set well, then shape. Coat and fry as directed for Chicken Croquettes.

Corn beef, roast or boiled beef, will work up well in croquettes. Cut the meat quite fine; if it is boiled beef, especially if it has been used for soup when so much of the flavor will have been extracted, season quite highly before combining with other ingredients.

Make the brown sauce as directed in our second recipe; add to it the other ingredients, turn into a deep plate, allow to cool and become quite firm, then shape, coat with egg and crumbs and fry as directed for Chicken Croquettes.

The sweetbreads should be soaked in cold water and salt immediately they are delivered; after they have stood an hour, drain them, cover with boiling water, and simmer gently until tender; then salt when partially cooked. Remove the tubes and membranes from the cooked sweetbreads and separate into small pieces about the size of large peas. Make half cupful of the usual thick white sauce, as directed in our first recipe, using the sweetbread stock for part of the liquid; add the other ingredients, turn into a deep plate; allow to cool and set firmly, then finish as directed for Chicken Croquettes. 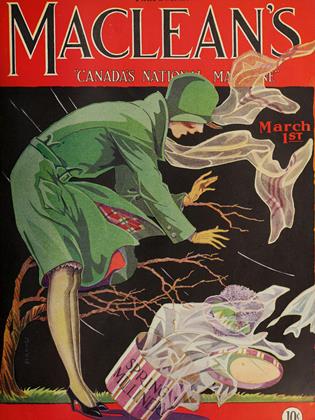