Nowadays, the aim is to make children's rooms mentally as well as physically healthy

WHEN I saw the delightful nursery which is illustrated on this page, I could not help thinking of the contrast between it and the one portrayed in an article which I read some time ago. The author of this article described a photograph, in her possession, of her father’s nursery. It was draped with red plush curtains heavily fringed and tasseled, and furnished with a massive sofa, other pieces of heavy furniture, and mortuary mounds of artificial flowers under glass domes. She writes: “My father appeared in the picture, a peaked youngster of six years, in striped stockings, sash and petticoats, striving vainly to reach a toy on the high nursery table. Beneath this gloom his good Victorian mother had sentimentally inscribed ‘His Kingdom’ !”

This description would not indicate that the littlear chap had much of a time in his kingdom. Color psychology, rebellion against authority, self expression and the many problems and theories that occupy modern mothers in the rearing of their children to-day had no place in the minds of parents some seventy years ago. Had anyone dared to suggest to that mother that her nursery was physically, morally and mentally unhealthy for her son, she would have scorned the idea. One wonders how she would regard the modern nursery in which everything is specially designed for the child’s comfort and enjoyment.

Another writer who has a great love and understanding of children is of opinion that one of the chief reasons why children love the story of the three bears so well is because the wee bowl and chair and bed were the personal property of Johnny Bear. This instinct for possession comes at an early age, and every child yearns for something which he or she may refer to as “my very own.”

In addition to their love of possession, children take a great pride in achievement, which is all too often unduly curbed. Such little matters as turning on the light, getting a drink of water, putting away their clothes, or similar feats, they prefer to accomplish personally without having to ask and await grown-up assistance.

The nursery pictured is a happy illustration of what may be accomplished by a child whose inclinations and tastes are considered and encouraged.

Sunshine may be said to be the basis of this room, which, as will be seen from the pictures, is an attic one with sloping roof, wide windows, and plenty of wall space. The floor is covered with cork linoleum, on which e blue and tan-colored rugs. The walls are done in plain buff paper, which makes a fine background for the jolly pictures with which they are decorated. The windows give a lovely view of trees and land and water. They are curtained with yellow silk, and the sills are gay with flowering plants.

The furniture for the room is for the most part painted cream, and the trimmings and fabrics are in yellow and blue. There is an open cupboard for toys, the lower portion of which has a rod across it, on which are little hangers bearing some of the wardrobe of the doll family.

You will notice that all the equipment and toys in the room are within easy reach of the little occupant, who has the old-fashioned name of Elizabeth Anne. The table, the “ducky” rocking-chair, the desk, the bed, are all suited in design and scale to one of tender years, and are unmistakably her very own.

The stencils which border the top of the decoration were all made by Elizabeth Anne on strips of paper, which were then pasted in place. She is now making stencils for the unfinished wall which appears in the picture, but these are being directly applied. You will see that some of them are already completed—the long stems with flowers at the end —but, she tells me, she wants to do them without making any blots, and is therefore making haste slowly. On this wall is also a picture of the well-known little Princess Elizabeth, which is to be the centre of much further decoration.

Elizabeth Anne has several sets of stencils for borders and for framing her more important pictures. Some of them illustrate the beloved Mother Goose characters; others have designs of fruit or flowers.

One of the walls which can be only faintly glimpsed in the picture, is a travel wall, in the centre of which is a map of the world, and above it the picture of a little girl absorbed in a geography book, while all around her are various scenes and places of interest, some of which are reminders of trips taken by Elizabeth Anne herself.

Many of the pictures on these walls have been selected from those which this interesting child has done in her painting book, while others are cut-outs from her many books and magazines.

Another wall is a charming presentation of the flower fairies and is educational as well as beautiful, for in this way the child has become familiar with many of the wood and field flowers. One can hardly imagine a more delightful method in which a child could receive instruction.

A New Use For Trunks in Store

T ACK of space has made it necessary to

use this nursery as a storing place for some trunks, but these have been turned into objects of interest by Elizabeth Anne and her governess. One of them will be seen against the unfinished wall just behind Elizabeth Anne as she appears in the picture. On top of the trunk, as a matter of protection, a piece of linoleum left from the floor-covering has been placed,'and on this a funny little village has been pasted, with houses, trees, shops and people in proper order.

There are no gloomy shadows in this nursery. Everything has been planned to delight the imagination of the child who inhabits it, and who is happy and busy in it, principally because she feels that she herself has created some of the charm of it.

Although Elizabeth Anne is happily absorbed in her pictures and books, active play is by no means neglected. When I asked her if she took her daily dozen down the Jack and Jill slide, she looked at me pityingly and said, “Oh, much more than that, just hun’reds I think.”

If a child has a different bent from that of Elizabeth Anne, he or she can nevertheless be surrounded with amusing and interesting pictures on the walls, for surely there was never a time when children were more thoughtfully considered in this respect than at the present day when intriguing wall papers graphically picture the stories of Brownies and Pucks, the Barnyard Babies or Nursery Rhymes, in every color and design to suit a wide variety of tastes, and to make a happy surrounding for children, no matter how they may be occupied.

When I congratulated the mother of Elizabeth Anne on the child’s achievements which to me seemed very unusual, she said: “Oh, she is not really remarkable in any way. She enjoys what she does and we have encouraged her to concentrate on her work and to accomplish something every day.” Lucky little Elizabeth Anne!

This nursery is really very simply furnished and yet has all the necessary requirements. It is colorful without being too vividly arresting, and gives the impression of being restful and comfortable. I am sure that its little occupant finds it a fine place in which to work and play. It must be jolly, too, when the day is over, to go to bed surrounded with pictures of Mother Goose rhymes and other well-known stories of fairies, animals and flowers.

In every house where there are children there should be a place for them to play without being interrupted and hampered by the expostulations of grown-ups. A mother of my acquaintance who lives in an apartment, and has two extremely lively children rather older than Elizabeth Anne—has solved the problem of a playroom for them by partitioning off a part of the sunroom for this purpose. Here she has had cupboards for toys and shallow shelves for books built in. There is also a long, low box with a lock and key in which the children keep costumes for dressing up as pirates or other wicked people. This box serves two purposes, for in addition to its legitimate use it also acts as a step to reach the high shelves. This mother says that there is nothing that boys like so much as a locked chest or box of their own. It suggests mystery, privacy and importance. A boy loves to take a key from his pocket and unlock his box of treasures before his admiring playmates. This pride of possession can be recommended as a positive cure for that universal malady, an inferiority complex.

A ROOM for children can be planned in a great many different ways according to one’s idea of childhood. The modern child realizes that the world he lives in is substantially the same as that of grown-ups, with only a minor difference in degree. It is advisable, therefore, in arranging his room to stress the points of contact between these two worlds rather than the points of difference. This is especially to be considered when one is designing a room that, like the one illustrated, will be at once a bedroom, a nursery and a playroom. This type of room can be an especially interesting one to do, for it puts all one’s ideas to the test of practicality.

An important point which should never be overlooked is that a room in which children are going to live should be easy to clean. Everything should be washable —floor covering, furniture and fabrics. If the furniture is upholstered, it should have removable slip covers. As a floor covering for children’s rooms, there is nothing so fine as linoleum, which to-day is very beautiful in color and design that it can lift any room out of the commonplace, and in addition is easy to keep clean and has splendid wearing powers. A great deal can also be done with ordinary oilcloth in a decorative way, as this formerly dull material has lately blossomed into beauty and is being used for curtains, cushion covers, table covers, and for other uses. It can be obtained in almost every color and combination of color, and its use offers great scope to the imagination.

It is when children are little that they use their home, love it, and store up the sweet memories by which they will remember it always. There is really no excuse in these times for not surrounding them with charm of color and design, and making their rooms a place in which they will delight to be. The ultimate test of the house in which they live is met if it so enters into their character and education that it becomes the most loved spot in the world. 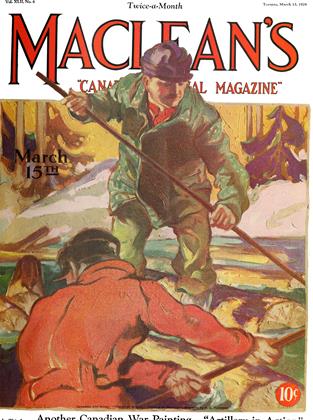