COLOR reigns to-day in every part of the modern house from the living-room to the garage. Even the cellar has entered upon a colorful career brought about by the new furnaces, the new paints, electricity, and the conversion of one or more of its rooms into “hide-outs” for study or play. Color is even affecting some of the dark sayings of old, for, as a humorous writer points out, we can no longer truthfully speak of the pot calling the kettle black, for the garb of both borders on frivolity. Materials with familiar names are blossoming forth in fresh radiance like oldtime friends in new guise to suggest endless possibilities of decoration. Many of them provide, at low price, designs usually to be found only in extremely expensive materials. This is particularly so in regard to cretonnes, examples of which are portrayed on this page, for in no other material is it possible to get for a modest price the richness, the color and the decorative loveliness.

The Fabric as Color Guide

'’"THE colors that one finds in cretonne—burnt orange, peacock blue, Chinese red, jade green—• cannot be so satisfactorily obtained in the plain materials, for in them red is red and blue is blue and, unlike the figured materials, these shades are not tempered by the proximity of other darker or lighter shades.

An interior decorator of repute who has recently been visiting Canada tells me that after she has definitely decided upon the color for her rooms, her first item of purchase is the fabrics, as these can then be used as color charts, and the background and accessories planned to accord with them. For example, if she chose an orange shade as the key color for a room, and had decided to use a figured fabric for the curtains, cushions and the like, she would select a fabric that had orange as a major color in the design, and with this as a chart would build up her color scheme. This is really an excellent way for an amateur to become acquainted with color harmonies, for by watching the way the colors are blended in the beautiful figured fabrics, one is less timid in introducing the occasional bold contrast.

Among the many new patterns in cretonne shown in the shops at the present time, the few examples selected for our illustrations are typically lovely.

Such designs retail for $1.50 a yard. It is possible to get quite satisfactory cretonne at about half this price, but it is not so decorative or rich in color as the ones pictured.

The very modern pattern illustrated, with the sharp angles, has no definite background, but is a very attractive blend of color and design. This pattern is particularly effective with wicker, and is a very popular choice for chair covers and curtains in sun rooms. In this, as in all the other examples illustrated, black is a strong accenting feature.

A material that is every year becoming more popular for curtains is theatrical gauze, which comes in all the soft colors, is delicately fine, washes well, and is only fifty cents a yard. For a long time this gauze was very expensive and was used only as glass curtains, the other day I saw a new and charming use for it. It was hung in double length over curtain poles to serve as side drapes, and was weighted most artistically by a floral pattern which had been cut from cretonne and appliquèd on the gauze just above the hem at the bottom. Such curtains are, of course, particularly suited to bedrooms or to rooms which open into a sun room where they form a protection without keeping out the light or air.

ONE of the most attractive ways to use cretonne is as a covering for a screen. A screen in any one of its many new versions is an important decorative feature nowadays, and is a transforming note in furnishing within the reach of any purse. When I was a child it was not regarded as anything that could be decorative, but was considered only from a utilitarian point of view, as something to keep out a draft or to act as a buffer against intruders. The ones with which I was familiar were covered with dark material and were severely practical.

One of the chief uses for a screen in decoration is that of forming a background of beauty for a piece of furniture that does not appear at its best against a plain wall. A screen is also valuable where the furniture is small and scattered. Its height and width make a break in the flat monotony and carry the eye up. In this way it is possible, with small expenditure, to get the effect of a large piece of furniture. A screen also has the advantage that it can be easily moved and folded into a small space. If a room is small, by its position before an open door it can extend the too limited vista and give the effect of space.

In a living-dining room a screen is almost a necessity to enable this room to play the double rôle that it essays, especially at meal times, when the screen effectively hides the set table until the meal is to be served.

It is hardly necessary to say that from a decorative point of view screens must be in harmony with their environment. They must be of the right size to suit the scale of the room and should harmonize with the general furnishings. The duty of a screen is to enhance the attractiveness of a room as well as to be useful.

' I 'HE screen with the bird design shown in one of the illustrations reproduced with this article is unusual and very ornamental. It is covered with a glorified oilcloth in gold color with a stenciled border, and the design in birds and fruit is painted on. It would be possible to use various treatments on a screen of this kind such as some of the new transfer patterns or old maps or quaint fashion prints.

The covering of a screen is a very simple matter which can be accomplished by anyone with taste and patience. After all, it is simply a matter of stretching material tightly on a wooden frame. A sturdy well-constructed frame with strong hinges and firmly locked corners can be bought unfinished in any of the furniture stores that specialize in unpainted furniture. When I covered mine, I made the mistake of stretching the material across without tacking it at top and bottom, and I got an uneven result. There are tiny tacks for this purpose which are very slender but quite long enough and which are practically invisible after being hammered in. Then as a finish it is advisable to use upholstery tacks at regular intervals on the final binding. Before attempting this work, it is a good idea to examine a finished production carefully, so as to have something to guide you in getting at low expense beauty that costs so much readymade.

The cretonne-covered screen illustrated has a modernistic frame and fabric design. The predominating color is rose tempered with ecru. Harmonizing flower shades trail over the background of angles in a pattern that suggests the Jacobean designs. Altogether it is a unique and attractive version of the new feeling for color and design.

A Craze for Color

TT IS rather interesting to try to imagine

what the source of some of the designs could be. The alert designer is constantly on the qui vive for something new which he can translate into form and color, from sky effects to public buildings. Sometimes the combination of flower groups supplies him with a theme, and the colors are applied in his design without the flower outline—just spots of color against a dark background.

On account of the present craze for color, nearly everybody is beginning to understand some of the subtleties of color combinations and contrasts. As an aid to further acquaintance with modern ideas in these matters, the general public in some of the large Canadian cities has had the opportunity recently of watching the operations of that uncanny color-educating medium, the clavilux, which can be operated to weave symphonies of color which are thrown on a screen. It is a revelation of the delicate gradations of different shades and the variety and richness of blending tones.

Everything that we wear and use tells the same story of the new legacy of color, and suggests youth and vitality. The present day designs in fabrics are vastly different from their former estate, and are not only artistic but frequently amusing. As in everything else in art to-day there is an expression of freedom in design that is arresting in its charm and interest, and every familiar color has been transformed by some small but vital change which has imparted new life to it. 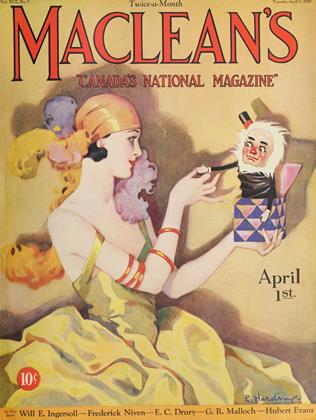