IN ITS April 1 issue, MacLean's published an editorial reproaching certain United States publications for featuring articles on the possibility of a future war between Great Britain and the United States. In deploring such stupid talk, the opinion was expressed that Canada, so often described as the “interpreter” between the two nations, can do a lot in the way of bringing about a closer understanding.

One of the first jobs we might tackle is the spanking of a few English journalists who persist in scribbling dirty remarks on the wall. For instance, in a recent issue of one of London’s oldest and most respected reviews, a writer calls “amusing” the fact that the United States press devoted more space and larger headlines to the illness of King George than did even the British press. He explains the “phenomenon” by announcing that “the American public always has been under the spell of the British throne.”

The article moves The Editor and Publisher, which reaches most newspapers on this continent, to make the following comment:—

“This article, with its impudent insinuations, makes painful reading. It is fairly typical of the mischiebmaking so'called English intellectual who forever is making invidious comparisons between peoples, finding peculiar joy in attributing coarse' ness, vulgarity and ignorance to the American press. He will have none of our taste. As a matter of fact the American press reflected the common human sympathy felt by the American people for the suffering king, his anxious family and subjects. It was a genuine proof of friendship. The American people have liked King George V as a man and as a sovereign. Our newspapers ably mirrored public sentiment and certainly not mawkish fascination for a throne.”

This comment is thoroughly justified. The peoples of the Empire fail to see anything “amusing” about the very sincere concern evinced by the people of the United States in the health of His Majesty. Canadians particularly, being in closer contact with a neighbor, have been profoundly impressed by the sympathy that has come from the other side of the line. That any English writer should make sport of that sympathy is merely demonstrating that pure asininity occasionally finds expression on both sides of the Atlantic. 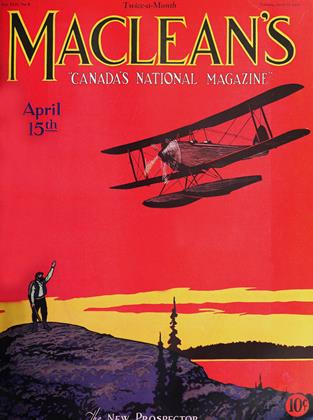