SPRING has brought apple blossoms to the fruit lands of the Dominion. It is remarkable that ninety per cent of the fruit is grown in three of these valleys—the Okanagan, Niagara and Annapolis.

Nature, the master artist, has been prolific in giving us canvases of rugged seashore, prairie land and mountain, but she has reserved her masterpieces for the valleys.

I have had the good fortune to cross Canada many times and know its beauty spots thoroughly. So I can visualize the beauty of these three valleys that are today a waving forest of white and pink blossoms, blossoms that will presently ripen into a golden harvest, bringing prosperity and wealth to thousands of Canadian men and women, valleys situated hundreds of miles apart, differing in formation and geography, yet so alike at this season of the year in their fragrant and blossomy beauty.

THE Okanagan was in its infancy when I saw it first, while driving through the Boundary country from Grand Forks to Penticton. The apple industry was young then, with only a few orchards at Kelowna, Summerland, Peachland, and the far-famed Coldstream at Vernon. J. M. Robinson, one of the district’s pioneers, had given up gold mining to become the father of Summerland, Peachland and Naramata. Small orchards were being developed at those places. Today the valley is thickly settled by thousands of fruit growers.

I remember Penticton as a small settlement with a store, a few houses, a hotel, an Indian reservation, and the Okanagan boat. Today it is a thriving city surrounded by beautiful orchards. Naramata clings to the side of the hill like a bit of Switzerland. It is picturesque and unusual. It has among other attractions a theatre guild—a theatre fashioned after the little theatres of Paris and London, for some time under the direction of Carrol Aikens, now of Hart House, Toronto. They produce the best in drama of all nations, the actors coming from all points to study and work in the orchards. Kelowna has stolen the name of metropolis from Vernon. It is the centre of an immense tract of orchard land.

Vernon is still Vernon, and that means much to the old timer. Lord Aberdeen established The Coldstream Ranch many years ago. Here came his brother-inlaw, Dudley Marjoribanks and Lord Ava, son of the great and popular governor, Lord Duff erin; their boyish pranks were the talk of the city for many years. It is tradition that to decide a bet Lord Ava organized a pageant of Indians and led them on horseback at high noon through the city streets garbed à la Lady Godiva.

Fruit farming in the Okanagan is on a different basis from that of the other sections of Canada. During the dry season the crops are irrigated, water being piped from the hills to the orchards. The farms are often perpendicular ones clinging to the hills, or terraced along the benches.

In Ontario, forty per cent of the fruit crop is grown in the Niagara valley, between Hamilton and St. Catharines. This valley is a veritable garden of the Hesperides. Viewed from the mountain above Grimsby or Winona, it appears to the eye like a checker board of apple, peach and pear trees, intersected by vineyards, these in turn giving place to vegetable and flower gardens. Perhaps no bit of Ontario is better known, for this district was the scene of many of the battles of 1812, Laura Secord’s name alone making Stoney Creek a shrine to the student of Canadian history.

DUT it is of the Annapolis Valley that I wish to write at length as I sit on the porch of a little inn in Paradise, a small village nestling among the hills near Annapolis. Here is an orchard over a hundred miles in length, stretching from Grand Pre on the north to Annapolis on the south. Through it all meanders the Annapolis river, the Gasperaux and Cornwallis. Here peace and quiet reign, broken only by the bell of an ox team, for the ancient ox team is still used in Nova Scotia and presents a contrast to the high-powered modern car which passes in a cloud of dust. This is the cradle of Canada. It was here, over three hundred years ago, that Champlain and De Monts planted the flag of Louis Le Grand.

The valley today is one huge orchard of apple blossom, a waving forest of apple-trees in bridal array. The railway runs so closely to the trees that it is almost possible to touch the blossoms from the train. This valley is the richest and most romantic part of Canada, fruit having been grown here for three centuries. There are still orchards that were originally planted by the Acadians. It is a Mecca for tourists, many of them drawn hither by Longfellow’s “Evangeline”—a beautiful poem which has been accepted as gospel truth by visitors unfamiliar with our history. Many, perhaps, do not know that Longfellow wrote it without having visited either Nova Scotia or the Mississippi valley. The characters were drawn in many instances from real life, their descendants being numbered among the Acadians of today. The plot of the story was told to the novelist Hawthorne, by the Reverend H. L. Connolly, who had it from a parishioner. Hawthorne saw in it a theme for a novel, but after keeping it for a time, passed it on to Longfellow. The poet was aided in his local coloring by having at hand Haliburton’s “Historical and Statistical Account of Nova Scotia.” This was supplemented by liberal quotations from the Abbe Reynal’s emotional account of the French settlers.

People visit Grand Pre as they would a shrine. The villagers make poor provision for their comfort. The place itself is typical of a small Canadian settlement with but little to remind one of the past. The thatched roof of Longfellow’s poem is gone, and gone are the Acadian farmers; but the pleasant farms are still guarded by the dykes, the tumbling waters of the Basin of Minas shimmer in the distance. Blomidon still stands sentinel over the pleasant land. The tradition is kept alive by the willows and the well—all of the original that remain. It is interesting to know that a park has been created on the site of the old well, said to be the exact spot of the expulsion. The Daughters of the Empire have erected a statue of Evangeline, the sculpturing being the work of an Acadian descendant, Hebert, of Montreal. The Acadians themselves have built a chapel on the site of the original, long since vanished.

The “forests primeval” are gone, but the few Acadian peasants who wandered back to die in the homeland, must of necessity have left a sturdy progeny, for their descendants are numerous and form an important factor in the social, business and political life of the Maritimes. Nature has done much for the Maritimers. They have a climate that gives them an almost assured harvest. They have the Atlantic for a storehouse of sea food whose excellence is unequalled.

"DUT fruit—and that fruit, apples— is the chief industry of the valley. Here again one finds the culture on a different basis from that of British Columbia or Ontario. The crop is sold largely to English buyers, often sold on the trees, the buyers picking and packing the apples for export to England. The valley is the home of the far-famed “Gravenstein,” the king apple of the East. This aristocrat of the apple world is seldom for sale on the local market. He goes abroad to be sold in Covent Garden market at a high figure. Over two million barrels are shipped in an average year, the returns in cash confined to this narrow strip of territory making it one of the most prosperous in Canada. The homes reflect it.

The spot that will perhaps interest the Canadian traveler most of all is Annapolis Royal. This is the old Acadian village of Port Royale founded by Champlain, De Monts, Poutrincourt, and Les Courbots. It was here that Canada had its birth in 1605. Here, too, so many things intensely Canadian had their origin. The first ship in Canada was launched here. The first mill to be built in Canada was at this place. The first convert to Christianity, Membertou, the Micmac chief, was converted by the Jesuits here; the first bit of Canadian literature was written when Les Courbots, a Parisian lawyer, wrote “Neptune’s Theatre,” a drama to celebrate the home-coming of Champlain who had been on a voyage of discovery to what is now Massachusetts. After Acadia became Nova Scotia, it was here that the first British court of law convened.

It is a matter of regret that Canadian children in Canadian schools are not being taught as much of this history as they should be. The West knows little of it. The East, in turn, knows little of all the romance of Hudson’s Bay adventurers, French explorers and hardy Scots settlers and pioneer days, epic days that form a chapter to inspire red-blooded Canadians.

I have met spring in many places; have seen Normandy in apple blossom time, have seen the roses bloom in Picardy and in Provence. I know the beauty of England when April is there; but as one grows older it is an illusion that each succeeding springtime is fairer than the last. Today, looking across this exquisite valley clothed in bridal array of pink and white, I can think of no fairer spring than this, of no locality more beautiful. Dusk has been setting on the hills while I have been writing. They have taken on their evening dress of blues and browns. There is a purple haze over it all. The stillness is broken only by the sound of some belated ox-team with its tinkling bells. The scent of the apple blossoms steals through the vineclad porch. The stars begin to appear. It is night in the Happy Valley. 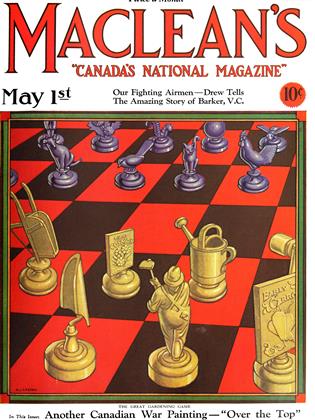