SUMMERTIME gives greater leeway for informal and original table decoration than any other season, for the home and wild garden furnish inspiration for charming effects. The present wide choice in cottage china and linens, brilliant in color and sturdy in texture, also aids the hostess in making her table as inviting in combined simplicity and richness as those old-world peasant boards where, either by accident or design, effects of such surprising charm are to be found.

The Italian feeling, for instance, is one which lends itself admirably to the summer table. The long refectory table is now a popular choice among those furnishing the summer home, and its usual dark oak surface is a perfect background for the building of informal effects. Semi-porcelain, earthenware and the heavy glass table services in lieu of china, are happy choices for this type, while the reasonably priced Italian crash linens in runner and place square sets give contrast to the dark wood and colored table ware. Such a table, set in semiporcelain in pottery design and heavy amber glass, is shown in the lower of the two illustrations on this page. A touch which adds to the Italian effect is the pair of oil and vinegar cruets in olive-green and amber, seen at opposite corners. The flowers are arranged at either end in two rather high vases which are linked by ivy which covers the centre of the table between them. This centre portion of the table is uncovered by linen, you will note, the two runners being laid on the outside edges, joined by a single square at either end. This is quite the latest and smartest type of runner set.

THE use of cruets as a decorative note brings out one of the ideas which may be very tellingly emphasized in this kind of arrangement—the utilizing of foods and their necessary containers as a decoration. The Continental salad is one of the most typical of dishes, as well as one of the most colorful, and the cruets give a cue to the influence of the whole setting. A salad bowl at either end might have given the same effect. The red of tomatoes, the pink of shrimps or salmon, the crisp fresh verdancy of any salad green, are in themselves a decoration and are in particular keeping used as such on a summer table.

Indeed, one of the most effective tables I ever saw was one entirely decorated with vegetables! They were piled at either end on pewter plates and had within their ranges of color all the depth and opulence of a still life by an old master.

Pewter or iron candlesticks in this same table were in the picture on a very coarse creamcolored linen net, as were also plates of a mellow pottery design.

But the garden and wild flowers offer the greatest scope to the hostess—even greater, in my opinion, than the hothouse varieties which abound in winter and spring. And the most delicate, as well as the most gorgeous effects can be obtained with them. One quaint and beautiful summer luncheon table is what one might call the “pansy carpet.” A brace of candlesticks in any metal which the house provides is placed at either end. In them yellow or gold candles are attractive with the pansy colors. Then, down the centre of a long table, lay strips of wax paper to protect the wood and “carpet” it with pansies. A little nosegay of pansies at each place is a pretty favor if the occasion has the “party” aspect.

Where Flowering Shrubs Can be Used to Advantage

nPHEN there is the inspiration of the flowering shrubs. At this time of the year the spirea hedges are in all their glory, weighed down with white, feathery plumes. For this type of flower decoration there is nothing so effective as the old-fashioned centrepiece vases with many arms and cups of different heights, for they give the branches an opportunity of falling as gracefully and unevenly as they would on the shrub itself. All the flowering shrubs are effective when used in this way.

The spike flowers are often overlooked as possibilities for table decoration, but as a matter of fact they can be utilized most effectively. Take the gladiolus, for instance. In its deeper and solid colors, such as scarlet, orange yellow and so on, it lends itself very well to the “country” type of table and all its aspects, though not so well for a centre as an end decoration, particularly on the long table. The white or pink, mottled varieties, on the other hand, are as delicate as roses, if properly arranged. Such an arrangement, in rather high, slender-based vases, is shown in the first of the two illustrations with this article.

The table on which these flowers were used was set for a formal dinner. The glasses, fruit comports and candy jars were of white crystal on which was enamelled a very delicate mulberry and cream design which reminded one of the toile de Jouy patterns in fabric and wall paper. The plates were a cream semi-porcelain decorated in the same color and similar design. The cloth was a fine white-embroidered and lace-inset linen.

Delphinium, or larkspur, is another “spike” which may be used to good advantage. The wild larkspur is to be found all through the country at this time of the year, and because of its dwarf proportions is even better for table decoration than the border varieties. It is rather a deep purple-blue, and with its straight, cylindrical habit seems almost to imitate the candles which may accompany it on the table. A rather charming way to manage its arrangement is to place in a shallow bowl four or five spikes of either the wild variety or small stalks of the cultivated variety, symmetrically spaced in a convex flower-holder. Floating in the water, waterlily fashion, place two or three lemon-yellow hollyhock blooms. This, by the way, is the only successful manner of utilizing hollyhocks. The whole stalks wither almost immediately they are cut.

Even nasturtiums, those urchins of the garden beds, have a place in wellplanned table decoration. The climbing nasturtiums can often be taken from the stake, stump or wall on which they may be clambering on a long, vine-like stem, and these little garlands have many possibilities. One is to make a frame for a small centre mirror, arranging the flowers so that they are reflected around the edge. Another is to wind them in a naturalistic manner about candlesticks. This latter may very easily take on a “fussy” appearance if one is not careful to treat the flowers sparsely and not wind their spirals too close.

A Centrepiece of Moss and Fungi

YANE of the most decorative things in nature, as well as one of the least used for our own purposes, is the fungus. There is hardly any strip of bush where wildflowers grow, which will not also furnish all through the summer growths of this variety in interesting shapes and colors. Many living trees and almost every old stump is decorated with it. For a children’s party or for any kind of adult night-time entertaining there is a very amusing as well as woodsy centrepiece inspired by tree fungus. It requires moss, a wide strip or so of bark, a tiny fern or two and, if convenient for you to purchase them, one or two of the knowing little china or earthenware frogs and turtles which are to be found wherever china or tableware is sold in any quantity. A mirror is useful for this arrangement, too, and forms a base on which to work. To represent water, leave a portion of the glass showing, and make a “bank” of the moss and a log of the bark, placing ferns and fungus at appropriate spots. You can then hide a frog under an awning of fungus and represent the turtle as climbing up the bank! Birch bark can be used and is particularly effective in this little terranium.

UIELD daisies are at this very time in L the ascendant. They have often been utilized as decorative flowers for weddings and church occasions, but I have very seldom seen them really artistically arranged for the table. One reason is their whiteness, which gives too little contrast to the usual appointments. If you can put daisies in a dark bowl—blue crackleware, for instance, or Bohemian glass—they show up to better advantage. They look best, however, when used as a foil for other flowers, particularly blue, such as cornflowers.

Pink garden flowers, as a rule, are not good for summer decoration, save in a harlequin bunch with other pastel shades. Stocks and snapdragons for this reason are best made use of in mixed bouquets for general use. Canterbury bells and foxglove are “spike” flowers which are better left in the surroundings Nature provided for them—in the garden where they stand like “tall privates of the rear ranks” guarding the lower blooms.

In choosing flowers for summer tables and arranging them, always remember in the general profusion of choice that it is better to err on the side of too little than too much. The “stuffed” vase is a painful thing both for the beholder and the flowers, and must make summer extremely regretful of her bounty.

If beauty be your goal let simplicity be your watchword, for in no phase of entertaining is the virtue of restraint more apparent than in the decoration of the table itself. 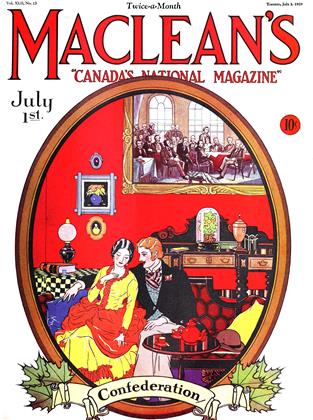