Medicine Must Turn to the Mind BESSIE BUNZEL July 15 1929

BESSIE BUNZEL, in an article published in the Century Magazine —“The Doctor’s Medicine Kit”—bids us conjure up the memory of a “silly, sentimental old picture” which Sir Luke Fildes once painted and which depicted a kindly, gray-haired physician hovering over a sick child’s bedside. This picture, the writer says, represents pretty faithfully the average person’s conception of the practice of medicine. Actually, she informs us, the doctor has had three different sets of instruments in his medicine kit since the beginning of the nineteenth century. The three tremendous contributions of the age to suffering humanity have been “the science of bacteriology, which gave knowledge whereby epidemic diseases might be controlled; the introduction of anaesthetics, which made surgery a field of everwidening scope to be used other than as a last desperate resource; and the adoption of antiseptic methods in the treatment of wounds, which cut down to a small proportion the ghastly mortality characteristic of hospital wards of an earlier date. When we think of medicine without all these commonplace adjuncts, we marvel not that the old-time doctor sometimes fumbled, but that he achieved anything like the success he did; for in spite of his handicaps, long experience and native shrewdness carried the best of the old family physician far, and in many respects we may well lament his passing.

“This progress which we have sketched in so lightly was due mainly to improvements in methods of investigation and diagnosis, to new advances in chemistry and physics, to a more serious study of physiology and anatomy, and above all, to the new interest in experimental laboratory work with its application of scientific method to the observation and recording of disease. And the value of the last cannot be overestimated. The human organism is so complicated that medicine, if it is to deal with it successfully, requires the co-ordination of various lines of scientific research. The chemist, the bacteriologist, the physicist, the biologist, the anthropologist and the psychologist— each has his contribution to make to the study of disease; and it was to the firstnamed of these that we owe our modern conception of the aetiology of infectious disease.”

Pasteur, we are reminded, “first unlocked the gateway into a vast unknown territory when by observation of fermentation in milk, wine and beer he concluded that similar fermentations took place in the human body during the suppurative diseases. The writer continues:

“Before we consider the application of Pasteur’s principles to wound infection, we must mention the other factor which played an equally important rôle in the development of surgery. One of medicine’s most dramatic moments undoubtedly occurred in the Massachusetts General Hospital on October 16, 1846, when in the face of the sceptical onlookers and Dr. Warren, the operating surgeon, Dr. William T. G. Morton, a dentist, by means of ether inhalation first produced a state of general anaesthesia in a patient. The following year a Scottish surgeon, Dr. James Young Simpson,^discovered the anaesthetic effects of chloroform and its usefulness in obstetrical work. Bitter beyond belief was the vituperation that followed from those who thought such procedure unwarranted interference with the workings of Divine Providence that had decreed suffering in childbirth as a punishment for woman’s primal sin. But Simpson answered his

critics in their own language saying that ‘my opponents forget the twenty-first verse of the second chapter of Genesis; it is the record of the first surgical operation ever performed, and that text proves that the Maker of the universe, before he took the rib from Adam’s side for the creation of Eve, caused a deep sleep to fall upon Adam.’ And by degrees, the tumult and the shouting died away; in a short time the use of anaesthetics in surgery became an established routine. By doing away with the intolerable pain that had inevitably accompanied operations in the past, the surgeon was no longer compelled to finish his task within a few minutes, but could now work with greater deliberation and accuracy; shock also to a large extent was eliminated.”

Now that serums have minimized the danger of many infectious diseases and the use of germicidal dressings has tremendously decreased the mortality in wound cases, the science and art of medicine must now turn to the mind in order to find a solution of many baffling conditions.

“With the prolongation of life should one not also expect such an attitude of mind and peace of spirit as will make the added years better worth the living? This is certainly not the case today. In addition to the large numbers in our institutions frankly afflicted with mental disease, there are vast multitudes suffering from psychic maladjustments which cripple them and likewise place an immense burden upon society. Dr. C. E. A. Winslow, of Yale, states that hospital facilities for the care of mental abnormality approximately equal the total required for the treatment of all other diseases, and that in the average family throughout the land, the handicap due to minor mental maladjustments is probably quite as serious as that due to all other forms of ambulant disease; and he then goes on to say that, ‘The thousand petty fears and jealousies and prejudices and inhibitions which keep us hour by hour from perfect internal harmony and perfect adaptation to the persons and the conditions which surround us—here is the supreme problem of mental hygiene.’

“But the solution of this problem necessitates not only a further development and improvement in the comparatively new specialty of psychiatry; but equally important, a different point of view on the part of the medical profession and a reaction against the solely mechanistic theories held by physicians so long. Undoubtedly the whole emphasis in the doctor’s training up to the present time has been such that inevitably he looks upon disease from a purely factfinding point of view. He has learned that often obscure disorders which have baffled his skill have a very definite physical explanation.

“Consequently, when puzzled, the average doctor looks for some hidden disorder and if none can be found his sympathy is very apt to evaporate; for he sees so much obvious suffering and unmistakable pain that he tends to have little patience with what seem to him to be imaginary complaints. Medical training in the past has not been such as to give^ an understanding of the decisive rôle that the emotional life plays in health and happiness. But it is this very discovery that is perhaps the main contribution of psychiatry and at the same time the most significant trend in modern medicine—that patients are individuals who have to be adjusted to life’s demands and that the study promising the richest rewards is the one throwing light upon the personality and behavior of man.” 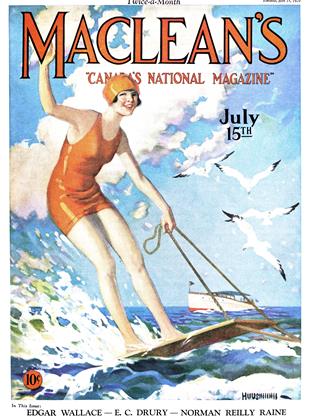