DURING the last ten years many sweeping changes have come into the world of decoration, but none has been more noticeable than the increasing use of metal for purposes both ornamental and practical. One factor which has greatly contributed to this tendency is the change in architecture itself. Houses with stuccoed or natural walls and scant woodwork are the perfect background for metal fixtures of every type. Many of the apartments and houses of moderate size which make up the homes of the majority of us, are now designed with a severity suggesting the Spanish or Mission influence. And, of course, the perfect complement to the interior of stucco, which typifies these influences, has ever been wrought iron.

As for the iron itself, one could almost say that there had been a renaissance in the craft of iron-work. There are innumerable craftsmen in this metal cooperating with architects, interior decorators and builders throughout the country, creating all manner of individual and beautiful types of metal furnishing fixtures, accessories and even furniture. Yet, however numerous they may become, these articles, being the personal output of single craftsmen, immediately assume a value far beyond their manufactured cousins.

The Spider and the Fly

ONE often hears of certain decorative periods of the past spoken of as the ages of one material or another. The eighteenth and early nineteenth centuries, for instance, are often spoken of as “the age of mahogany.” The eighteenth century, when the great English silversmiths were in their glory and the laying on of silver over copper produced that highly prized plate now known as “Old Sheffield,” is another cycle contemporary with the age of mahogany. Go farther back and you find pewter in alliance with oak. It seems that every period has its complementary metal, and that of the twentieth century is, assuredly, wrought iron.

A very interesting and original example of this I discovered in a home of the modern type the other day, where a complete programme for the introduction of wrought iron had been planned in the furnishing.

The first unit to be included in this decorative scheme was the fireplace and all its appurtenances. The firescreen, being the most prominent of these, offered the greatest opportunity for design, and some whimsical pattern which would show up against the light of the fire, occurred to the makers. The mesh of the screen itself first suggested a spider’s web, and the illusion was further carried out by a circular structure of fine wirelike metal, representing the “guide ropes” of an actual web. That the spider himself should crouch in one corner was a touch of realism; but the further presence of his quarry, the fly, was a stroke of genius. The effect of this screen with the fire leaping behind it is frequently a source of great amusement to the host and hostess. Guests are often so convinced that the spider is creeping up on the fly, that their fears have to be quieted with an actual demonstration of his immobility.

Then the picture of fire implements hanging on a stereotyped upright rack did not appeal to these furnishers, for two causes. First, they wanted something original; second, they remembered how often these overloaded iron-trees, owing to the sometimes uneven weight of their loads and necessarily quick handling they received, toppled over. So they resorted to a rest for the fire tongs, poker and shovel, which has a prototype in many of the beautiful old-time; fireplaces—a bracket right on the hearth. They are just slightly raised, so that their possibly hot or ashy ends do not soil or scorch the tiles.

The hearth itself is outlined by a very low rail—really only a footrest. This type of rail in conjunction with a screen is now preferred to the old-fashioned high “fender” which often kept warmth from the feet and still was no great protection against sparks.

The woodbox was also of iron, with hinges suggesting a piratical strong-box. It was made small enough to fit inside the rail, on the hearth, however. It holds cannel coal or quarter-lengths of hardwood.

The finishing touch for the fireplace, however, was an exquisite little floral silhouette just in the centre of the mantel. It was fashioned, of course, of wrought iron.

VET of all the happy details of this arrangement, that which stands out in my mind as the most ingenious is the idea that was worked out for the lamp shades. These, though they are of ordinary parchment, have the effect of wrought iron. An artist was commissioned to create a design which would give this impression, and using ordinary shields evolved this grille effect. The wall brackets throughout the room are all treated in this way—with parchment shades painted to represent wrought iron.

The same illusion has been carried out in an arched recess on the side of the fireplace, where shelves are inset for books or incidental vases. The plaster has been stained a mottled light green, and over this, has been traced a scroll of the same design as in the lampshades, painting it black.

There are many purely decorative pieces to be made in iron, for it may be beaten thin and cut delicately enough to lie like a sheet of paper on the wall or any flat surface. Coats of arms, numbers for doors, fantastic designs of any description are made in this way. Of this type is the plaque shown with this article, which is designed by the owner to be placed over his writing desk.

Ventilators, so often unsightly cast iron or cross-hatched wooden affairs, may be made decorative additions by wrought iron scrollery. Ash trays of the hand-wrought metal are not only delicate and beautiful, but a boon to the housekeeper. Anyone who has had the task of cleaning brass or silver trays after thick layers of ashes have been left on them, will know how to appreciate the unpolished dark surface of iron.

IRON candlesticks are appropriate for many rooms, and I have seen them very effectively used as decoration for a refectory dining table. An interesting combination of candlesticks and mirror is shown in another of the illustrations. This hall mirror greets one on the landing of the stairs leading to the main hall of the duplex apartment which it adorns. Thus it reflects light from the opening of the door below in the daytime, throwing light into the upper hall, and at night, catches the reflection of the electric light in the upper hall, thus helping to light the stair.

The combining of mirror and candle-, sticks to give soft reflected light is not a ' new idea, but an extremely good and useful old one. This combination in a room lighted only by candlelight, as for a tea, is especially appropriate. The style, of course, dates from the time when only candlelight was used and sometimes required to be augmented.

Wrought iron can reproduce any period of design with dignity, it seems, for the modern Vulcans are making faery tra-

ceries out of the sturdiest of metals. Furthermore, the beauty of their products is not dimmed by the prospect of the ' great care that is needed to keep them at their best, for routine dusting and the occasional application of sweet oil is the only attention which iron requires. It is impossible to show here the many attributes of the articles which are being made today in this decorative metal, but it is well worth the while of everyone interested in the home to search out the forges which are hammering into whimsical beauty the metal of our age. 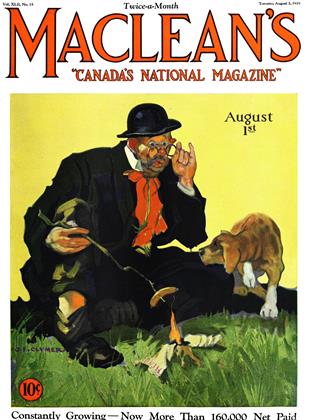