VEGETARIANS who believe a carnivorous diet detrimental to health will derive scant comfort from a piece of research described in the Journal of the American Medical Association. The Arctic explorer Stefansson and a former Arctic confrère, Andersen, went on an exclusive meat diet for a year, beginning in February of 1928, and were intensively studied from every clinical angle by scientists under the direction of the noted biologist, Professor Raymond Pearl of Johns Hopkins University. Their reactions, physical and otherwise, to this beef-eating existence are maybe worth consideration.

According to Dr. Clarence W. Lieb of New York, who makes a detailed clinical and laboratory report in the medical journal, the study “indicated that such a dietary had left no physical or clinical stigmas, and that while Stefansson was living on nothing but meat and fish his health was at its maximum.”

was The report adds that the data presented “quite naturally gave a jolt to our accepted ideas of protein metabolism.” And well it might. Here is one more case —two, in fact—where a perfectly fine theory was demolished by a mere fact. Also the old argument that health on a meat diet would be possible only in the Arctic and during vigorous exercise, is somewhat dented, for Stefansson and Andersen neither left the United States nor took vigorous exercise. As a by-product, the experiment apparently cured Andersen of chronic colds; moreover, his hair stopped falling out. Both men avoided milk, drank coffee, black tea and water and ate rare meat.

“Of course,” comments the Outlook, “it takes more than two such cases to establish a fact, but what these two intrepid dietetic explorers have demonstrated makes it look as if a lot of us might be dwelling too anxiously on what to eat and what not to eat. Nature usually tells us, subconsciously, what is good for us, if we let her.” 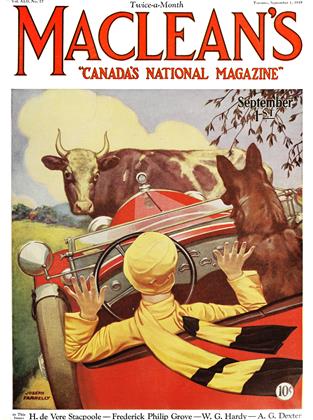