Why Not a Cartier Festival ? HON. RODOLPHE LEMIEUX January 1 1930

THE celebration of great national anniversaries is the manifestation of a very modern idea as well as a significant tendency of the present day. Three years ago, the millenary of Normandy was celebrated with much pomp in France, and that country has just been paying homage to that sweet, yet martial figure, Joan of Arc. It has also commemorated by a brilliant tournament the founding of the romantic old city of Carcassonne, In Canada, we are equally mindful of epoch-marking dates in both our regional and national history. One need but recall the memorable tercentenary festival held in 1908 to glorify the memory of Samuel de Champlain, the founder of Quebec, the wise and discreet adventurer who knew how to discover land as well as colonize it. And the striking demonstrations held from coast to coast two years ago in commemoration of the Diamond Jubilee of Confederation still linger in our minds. These festivals of yesteryear were eminently fitting, and evoked the right kind of historical memories. However, they must not divert our attention from other milestones that mark the pathway of Canada’s history.

Among the anniversaries of a national character looming before us there is one which, for Canada, should be more glorious and brilliant than all others.

At no distant date—in less than five short, fleeting years— the fourth century of the discovery of Canada by Jacques Cartier, the gallant and intrepid explorer from the little seaport of Saint Malo, France, will be rounded out.

It was in April, 1534, that he sailed from that port—famed in those days for its corsairs— to accomplish his first voyage to the New World, plant the Cross on Canadian soil, and take possession of a vast expanse of territory in the name of the King of France.

Jacques Cartier has a powerful claim upon our affection and gratitude. His achievement was not confined to the discovery of Canada. He was the first white man to ascend the great St. Lawrence River and give to our islands, capes and bays names which have endured _to this day. He was also our first pioneer in clearing the land and tilling the soil in Canada.

A Record of Discovery

'"THE discoverer of Canada was also this country’s first historian. The account of his three voyages, written in the naive style of Montaigne, contains charming descriptions which have lost none of their freshness with the passing of the centuries. Jacques Cartier’s account is really a remarkable narrative. One is struck with his descriptive powers, his keen sense of observation, the accuracy of detail. The story of his adventures was translated into several languages, and made known to the Old World the resources and beauties of the western continent. Cartier was also the first historian of Canada’s indigenous tribes, even as he was their first missionary. He observed their habits and acquired some knowledge of their native tongue.

Like a good mariner, Jacques Cartier carefully noted his observations. He drew a map of Canada, and took soundings of the St. Lawrence River that were of inestimable value to other navigators.

Leaving the port of Saint Malo on April 20, 1534, Jacques Cartier set sail on his voyage of discovery with sixty companions aboard two vessels of about sixty tons each. He reached Newfoundland on May 10. One feels tempted to reproduce those passages wherein he describes his explorations along the Atlantic coast. It is but necessary to state that on July 3, he crossed the entrance to the Baie des Chaleurs, which was so named on account of the sweltering weather he experienced there on that date.

Cartier cannot refrain from expressing wonder at the magnificent harbor, Gaspé Bay, that unfolded itself before his eyes. On July 4, Port Daniel was reached, and penetrating farther upstream Jacques Cartier soon effected a landing.

Friday, July 24, 1534, marked a red letter day in Cartier’s voyage of discovery. Let us recall a passage from his narrative. “We had a cross made thirty feet high, which was put together in the presence of a number of Indians on the point”—it was probably set

up on the Peninsula, as it is called, which lies opposite to Sandy Beach point—“at the entrance to this harbor, under the cross-bar of which we fixed a shield with three fleur de lys in relief, and above it a wooden board, engraved in large Gothic character, where was written, ‘Long Live the King of France.’ We erected this cross on the point in their presence and they watched it being put together and set up. And when it had been raised in the air, we all knelt down with our hands joined, worshipping it before them; and made signs to them looking up and pointing toward heaven, that by means of this we had our redemption; at which they showed many marks of admiration, at the same time turning and looking at the cross.”

A Land of Promise

' I 'HE fertility of the soil in the Gaspé country was noted by Cartier and his companions. “Not a corner of this land which is not replete with wild wheat, with ears resembling buckwheat and the grain oats-like; wild peas in such quantities that one could believe they had been cultivated and grown in ploughed land . . . ”

The narrative of Jacques Cartier’s voyages contains ample evidence of his profound spirituality and his earnest desire to convert the pagan Indians. It reveals to an equal degree his unconquerable faith in the tremendous potentialities of the land he had discovered and reflects his unbounded enthusiasm in the Canada to be, the fertility of its soil, its vast untouched natural resources. In this respect, Cartier was probably the greatest propagandist, the most eloquent “publicity agent” this country ever had in the Old World.

Cartier was the first white man to grasp the possi-

bilities of the great empire covering the northern half of the western continent. Let us pause and hearken to his description of Prince Edward Island, which he visited in the course of his first voyage: “The soil

where there are no trees is also very rich and is covered with peas, white and red gooseberry bushes, strawberries, raspberries and wild oats like rye, which one would say had been sown there and tilled. It is the best-tempered region one can possibly see ...”

Journeying up the St. Lawrence River, Jacques Cartier viewed with amazement the vast stretches of fine rolling country extending along both shores, and notes in his narrative: “We had sight of the finest and most beautiful land it is possible to see, being as level as a pond and covered with the most magnifil cent trees in the world. The whole country is as

» fine a land as ever one beheld. This river is the

n richest in every kind of fish that any one rememBS bers having seen or heard.”

The commemoration of the fourth centenary of the discovery of Canada should be, above all, of a religious character. Jacques Cartier was the ^B first herald of the teachings of Christianity on Canadian soil. He was the first to establish the religious tradition in Canada, and though other discoverers and pioneers followed him—such as H Champlain, the founder of Quebec—they only WSm followed in his footsteps.

Ég But where should this proposed fourth centenary festival be held? Undoubtedly at that place |H where the discovery of Canada, properly speak9 ing, was made, that is, at Gaspé. That is where

IW Jacques Cartier took possession of the soil of

W Canada in the name of the King of France, and W on this coast he spent nearly a whole month. f Besides, does not Gaspé offer all that is necessary to attract on such an occasion the thousands of people who would come from all parts of Canada, the United States, England and France, to join in the celebration of an anniversary that would be not alone religious and national in character, but would also take on an international aspect?

And would it not be extremely appropriate that the celebration of the 400th anniversary of the discovery of Canada should reflect in some enduring manner the tribute of a grateful people to the memory of one of the greatest discoverers of all time? And what tribute could be more expressive of a nation’s gratitude to the first pioneer, the premier trail-blazer on Canadian soil, than the erection of a memorial on the very spot where Jacques Cartier planted the great cross in July, 1534.

Five years do not constitute too long a period in which to prepare and organize this commemoration, whose splendor and magnificence should be in keeping with the event it is to recall. Let us impart to this tentative project, the character of a national undertaking. Let every national and historical society, the universities, colleges, schools, Canadian clubs, service clubs, the religious bodies and entire clergy collaborate in carrying to fruition a project that should appeal strongly to all who appreciate the historical significance of the anniversary to be commemorated. No doubt the different Provincial Governments of Canada will join spontaneously in the movement; England, France especially, and the United States, will also answer the call.

1934 ! Only five years hence, and this great anniversary will be a fact. We should therefore set ourselves to work at once. The celebration should be thoroughly representative of the spirit of the Canadian people.

Jacques Cartier was born at St. Malo in Brittany in 11*91, one year before the epoch-making voyage of Columbus. Of his youth little or nothing is known, until we come to the record of his 1531* voyage; but he was in all probability hi ought up in an atmosphere of discovery.

In all he made four voyages to the St. Lawrence, the first or discovery voyage taking him as far as Gaspé, the second past the Saguenay and, by canoe, to Hochelaga on the site of the present Montreal, and the third and fourth with Roberval, who was attempting to penetrate the country up the Ottawa, mythically termed “Saguenay.” His last voyage was in 151*1, and in 1557 he died at St. Malo. It is possibly a slight inaccuracy to call him “the discoverer of Canada.” The land itself was know, to the Northmen 500 years before Cartier; but the credit of bringing it into the compass of civilization is his. 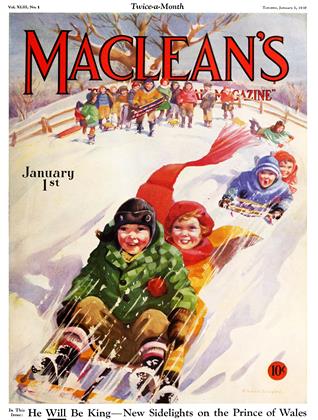