IN MAKING certain architectural changes in a house built some thirty years ago, the owner asked if a small enclosed porch could not be made comfortable for year-round use instead of during just a few months of the spring and fall seasons. In winter this room was too cold; in summer the pitiless sun beating on the roof and thin walls of two sides made it intolerable after noonday heat.

This condition is common to a large number of houses, especially those built more than five or ten years ago before the sunroom had become well known and incorporated into the architectural scheme. Earlier houses had a lot of waste space in verandahs, which were seldom used because Canadian winters are long and cold and Canadian summers bring mosquitos and other insect pests. Therefore, some of these verandahs were enclosed with more or less flimsy walls and called “sun parlors.” Beyond being screened in summer and affording slight protection against the elements in winter, these oldfashioned sun parlors were just the same as open porches.

Home owners everywhere nowadays, viewing their homes with intelligent eyes, are trying to absorb all waste space and to create rooms of comfort and beauty wherever they can. The man wrho transformed his useless sun parlor into an informal, comfortable room which became a second living room has been w’ell rewarded for his ingenuity.

The greatest trouble with all rooms of this type is, of course, that a livable temperature is hard to maintain. There are two reasons for this; poor insulation of w’alls, and inability to put suitable heating units into extra rooms like this no matter where they are situated.

It used to be thought that adding extra rooms or insulating the ones we already had was an expensive business requiring carpenters plasterers and other members of the building trades, all skilled workmen whose time ran into money. Now there can be found all kinds of insulating boards; thin, fairly light and easy to handle, durable. These boards, which may be bought at builders’ supply houses under various trade names, come in varying lengths and sizes, ready to fit rooms of any dimension.

Any man with a slight talent for carpentry can put this board in place, though it costs very little to have such work done by skilled workmen.

rPHERE are various ways "*• of finishing such wall treatments. If this insulating board is put inside the room, as it usually is, it may then be painted or papered or may have thin strips of wood over the surface. If pieces have to be joined, the latter is really necessary for a pleasing appearance. The basic wall may be painted one color, the boards a deeper shade of the

same color or a contrasting hue. Interesting color schemes may be developed where the overlying boards and the cornice boards over the windows are the same color and contrast with the walls.

heat to sunrooms and spare rooms which are inadequately heated from the central furnace or heating plant. Of course there are gas and electric stoves which can be used to heat these rooms, particularly if they are well insulated and connect with the heated house by means of a fairly large opening.

In cases where the sunroom wall has a flue, it is a simple matter to have an opening cut and one of the new ready-made mantels put over it, thus creating a cheery open fireplace. These mantels come in different kinds of material in many colors. The most interesting this season are those which simulate tiling. The basic material is a composition containing cement and asbestos—thus being thoroughly fireproof — and has a high glaze finish. This is the same material which is being widely used now for bathroom and kitchen walls. Some mantels are brick, some are wood, some imitation stone. There is a wide choice, and if a period room is desired there are mantels which carry out the feeling of the best known periods.

When the sunroom is an enclosed porch, one wall is inevitably the outside wall of the house. Such walls do not add to the cheerful, comfortable atmosphere that w-e would create. So we cover them up.

It is possible in some cases to use insulating board for this purpose. Then paint or paper the whole room. If we prefer another treatment,

large colorful India prints may be hung up. Two will cover an entire wall of the average-size room. Sometimes they come in pairs. A third plan is to drape the wall with some pleasing fabric. Cotton print in gay colors and interesting pattern adds greatly to such informal rooms. Another suggestion for wall treatment, and one where the sunroom is used to house growing plants, is to have a large trellis of thin narrow laths built along the wall and vines trained to cover it. Indoor ivy, planted in large pots and decorative tubs, may be trained up the trellis and it makes u background of great beauty.

Where Linoleum is Ideal

/^LASS will figure largely in the sunV-J room. In fact, the larger part of the walls will be windows. For this purpose, nothing can equal the new special-process glass which admits all the known properties of the sun and enables us to have sunbaths in the dead of winter. In families where there are babies and small children, facilities for the daily sunbath are of great benefit. Flowers thrive under these conditions, too.

Floors in sunrooms are nearly always of linoleum. If more expensive treatment is desired tile or marble is suitable, but for the most part linoleum in patterns designed especially for sunroom use is chosen. It looks smart and gives good service.

For the most part there are four general colors used on sunroom floors; green, terra cotta, Moorish blue, black and white. Sometimes over the linoleum is thrown a bright-colored rug or small scatter rugs. In the rooms pictured with this article a small Oriental black and white floor is shown in one instance; two Numdah rugs, turquoise in background with bright-colored embroidery, are thrown over a black and grey marbleeffect linoleum, in the other.

Of course, there is no rule that linoleum should be the floor covering. Grass rugs, Chinese matting, ordinary carpets, are all entirely appropriate. The reason for the j preference in favor of linoleum is that it holds its color in the glare of the sun and I the new inlaid linoleum is easy to keep clean.

In one of the rooms illustrated the ! scheme was determined by a pair of j Numdah rugs. These rugs are made of ; beaten wool. To make a rug, the natives of a province of Northern India get a quantity of wool in a heap and then pound it and pound it until it is flat. The rug is then embroidered in bright colors, the motives chosen from nature.

The rugs illustrated were turquoise, j and the embroidery was done in various colors, rust predominating. A wall paper 1 was found in which the background was ; cream, the figures turquoise and rust. Draperies were flowered cretonne in the same colors, furniture coverings were

made of rust-colored slub repp, the wicker i woodwork was painted turquoise.

' [ 'WO rooms, not illustrated, were created for people who wanted something "different.” In a room which need not be used often, a color scheme which might have palled on the senses if seen in living rooms or bedrooms satisfied a long felt want for bright and daring colors.

The second room was designed for a family where the younger members wanted a room done in the modernistic manner. A scheme of black and white and red prevailed from the black-and-white floor through the window treatment— stationary floor-length draperies made of white linen on which a design of black trailing vines crept toward the ceiling, draw curtains of flame-colored rayon taffeta which just cleared the sill—and on into the furniture of chrome steel tubing with black bakelite tops for the tables, woven rattan seats for the chairs.

Sometimes a sunroom is not needed either as an informal living room or as a conservatory. It may then be used as an informal dining room, particularly in houses where dining rooms are dark or very formal. Many families like informal meals but dislike breakfast alcoves or kitchen nooks. A sun-filled, warm, enclosed porch where the furniture is comfortable and "gossipy” in feeling provides a cheerful place for breakfast and lunch and Sunday evening suppers. Of course, all dining room accessories must be kept simple and in the spirit of gay informality; peasant-embroidered linens instead of damask, bright-colored pottery instead of fragile chinaware, perhaps one j of the complete colored-glass sets now so popular. The furniture might be painted to carry out the color scheme. The newest color scheme this season combines leaf green with dark, vibrant blue. Deep blue glassware, leaf green painted furniture, dark blue net for curtains—these are made in two pairs, sash curtain style; one pair is pulled across the top sash, the bottom pair is pulled back to admit the light —with a cornice board of the same shade. Cushions used here are made of leaf green glazed chintz, bound with dark blue.

Informal rooms after the type of room i called "morning rooms” in England may be made of sunroom space. French provincial furniture of the lighter type, which is becoming so popular in Canada, comj bines well with toile de Jouy draperies | and organdie glass curtains. A charming and much-admired version of this 300years-old fabric is pistachio green printed in wine red. This is used with plain, full, looped-back glass curtains of pistachio green organdie.

In morning rooms there would be kept more intimate furniture than is usually j seen in the living room; the sewing cabinet, the desk for keeping household accounts or writing letters, the chaise longue for half an hour’s nap, the canary, | and perhaps the baby’s bassinet during the sunny hours. 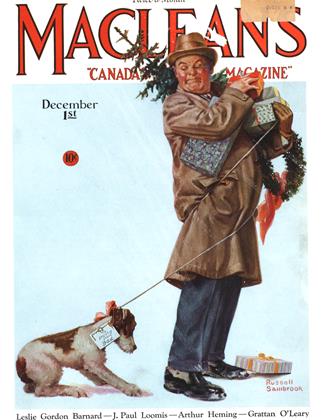