LAST summer the Queen’s University chose a new principal, Mr. William Hamilton Fyfe, and in the Queen's Quarterly Review J. A. Stevenson summarizes his career. After relating how they met as students at Fettes College in Edinburgh, the writer tells how Fyfe became Dean of Merton College, and continues:

“From 1904 onward William Fyfe was the life and soul of Merton College. He did a great deal of tutorial work, he played an active part in college administration and he was the guide, philosopher and friend of all the undergraduates. In the wider life of the university he also busied himself in various directions; he was one of the leaders of a group of reformers who were persistently battling with the conservative elements in order to bring Oxford’s educational methods and standards into conformity with a world in whose life science was playing an increasing part. He was also editor of the Oxford University Magazine. When the Great War came Fyfe, although he had no previous military experience, at once offered his services in any capacity, but he proved so competent an instructor that he was retained at Oxford on the training staff of the O. T. C.

“Fyfe remained in Oxford till the war was over, but in 1919 there came to him an offer of the headmastership of Christs Hospital.

“Here Fyfe realized that his boys, most of whom had scant pecuniary resources, must go out and make their own way by their own brains and energy. He gave every boy a certain rudimentary training in the classics, but he would only encourage such as showed a peculiar aptitude for it to specialize in this branch of learning.

“As a consequence of this interesting enterprise Fyfe has been a valuable recruiting agent for Canada.

"When he came to this country on his first visit last April, he had not the slightest idea of being principal of Queen’s or any other Canadian university; he was simply an observant and interested visitor who was having his first real holiday for some years and was determined to combine enjoyment with an acquisition of knowledge about Canada’s educational system and general conditions. The offer of the principalship came to him without any solicitation or effort of any kind on his part.

“So William Hamilton Fyfe becomes principal of Queen’s at the age of fiftytwo, in the prime of life. He is the first principal who is an alumnus of an English university, and there has been some shaking of heads at what is regarded as a break with the old ingrained tradition of Queen’s, that some sort of Scottish flavor is an indispensable ingredient in the character of all good principals and professors. Now Principal Fyfe may have received his university education at Oxford and spent most of his adult life in England, but he is essentially a Scot. He spent the seven most formative years of his life at school in Edinburgh.

"The new principal is not only a scholar of fine quality and an educationalist of ripe experience and acknowledged eminence, but he is a man of real intellectual distinction whose interests are as wide as his time allows. He is no angular pedant with a single track mind but a cultivated man of the world whose opinions on politics, literature, social problems or art are always worth hearing.” 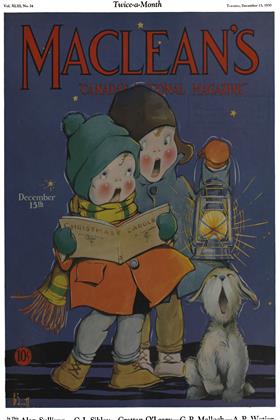