THERE is scarcely a dwelling, however humble, that does not harbor at least a bit of garden somewhere within its four walls. A growing plant, whether it is rich in bloom or has only luxuriant foliage to recommend it, is a stimulating object, and in addition it can play an important part in the decorative scheme.

One of my neighbors, an Englishwoman has a most gorgeous window display of flowering plants, which has quite put to shame my efforts to prolong the bloom and beauty of the various plants bestowed upon me at the Christmas season. As her hints have done much to resuscitate my falling leaves and fading flowers, I am publishing her methods for whom it may concern.

“Don’t imagine,” said this lady, “that I was born with the knack of making flowers grow. No such magic touch was mine. I have succeeded by dint of reading everything possible about house plants and their care, finding out what other people did under similar conditions and applying the knowledge thus gained. I was particularly handicapped in regard to such matters when I came to Canada, because in England the problem of providing plants for the house is very easily solved. It is common enough in the old country for people to make an arrangement with their florist, whereby he undertakes for a small charge to supply them with flowering plants at stated intervals, and to replace any that are dull and out of bloom with others that are just coming into flower. It is an admirable arrangement, but hardly one that stimulates interest in the care of plants. I found that this was not the custom in Canada except among the wealthy, from which class I was far removed. I felt that I needed the companionship of plants, and after losing several that I had attempted to raise, I determined to find out what I could do to prevent further casualties. The only plant that seemed to be impervious to changes of temperature and spasmodic attention was the sturdy old aspidistra. Like Bill Sikes’s dogit survived all forms of ill-treatment, and consequently served as a sort of “plant piano” to me, because I was able to practise upon it the various methods of treatment that had been suggested to me. It taught me a lot about house plants. I found that it responded most gratefully to a loamy soil, plenty of water, and an occasional treat of fertilizer. I have become noted for the beauty of my aspidistras.”

After she had, so to speak, graduated from the aspidistra class, my neighbor took a more advanced course which included the culture of flowering plants. She began with the calla lily, one of the most easily cared-for of all the winter flowers. Because of their onetime use for funeral purposes, callas have not been general favorites for many years, but as this use is now passing, they are rapidly gaining in popularity. These plants thrive best in a cool place and are consequently best suited for windows with a northern exposure. One will occasionally see very fine specimens of callas in country houses where the rooms are not kept at a very high temperature and where gas is not used. There is a dignity and exclusiveness about these lilies that suggest their alliance with furnishings of an older day.

Another plant hat responds readily to even perfunctory care is the begonia, which will bloom throughout the entire season. On account of its rapid growth it requires a good deal of elbow room and frequent watering. Care must be taken, however, with this—and in fact with all house plants—to avoid excess in applying water. The aim should be to keep them moist but not wet. Another point to be remembered is that no plant should stand indefinitely in a receptacle in which water has accumulated, for that way failure lies.

It should be borne in mind that many house plants are forced to live under extremely unnatural conditions and for that reason need every encouragement and consideration. My English neighbor says that plants are victims of excess in treatment—too much water, too much heat, too much draught.

If limited to a single plant for winter bloom, choose the cyclamen. It has all the plant virtues: health, beauty and adaptability. Its modelling, coloring and luxuriant growth make it a delight to the eye, and it has a long season for bloom. It is also remarkably free from insects and requires comparatively little attention. It will succeed best in a window in which there is little sun. Its one demand is water. My experience has been that it is advisable to place it in a pail of water so that the soil is completely immersed for a few minutes daily. Water should not be left standing about the roots, but the soil must always be kept moist.

' I 'HE heat in our houses in winter is often referred to as a hothouse atmosphere, though that is hardly correct, for the air in hothouses is moist whereas most furnace-heated dwellings are as dry as the desert. One plant that thrives astonishingly well in this dry air is the cactus, which being a desert plant is not adversely affected by lack of humidity.

Cactus plants and English ivy are in high favor at the present time as house plants. Both fit in admirably with the severe lines of the new furniture and will flourish with even casual care. Either of these plants may be grown in water, and charming pottery and glass bowls are used for this purpose, which serve to enhance the decorative scheme. The glass “witch balls” for sprigs of growing ivy are particularly attractive. These come in many colors and when provided with fine brass chains and hooks for hanging in various parts of a room or in the window, are most attractive and effective aids in decoration. My English neighbor has several of these glass balls in her window from which the ivy trails in long delicate sprays. One could grow the old-fashioned “Wandering Jew” in these balls with good effect. Potted ivy is also in great demand at the present time and is fairly easy to grow successfully. It requires little sun and but moderate watering. Some people believe that a bit of charcoal in the soil works a magic spell in the health and growth of this plant. It is advisable to wipe the leaves occasionally with a cloth saturated in kerosene.

One of the most beautiful winter plants is the azalea. It requires a good deal of care to preserve its bloom and vigor. It is a thirsty plant and does not thrive in an overheated room. Like the hart, it pants for cooling streams, and when it is in bloom should be watered twice a day. As the flowers fade they should be cut off close to the stem so as to prevent seed formation. I had supposed that azaleas lived only for one season, and last year, after mine had ceased blooming, I put the apparently dead plant in the back porch and forgot about it. In preparing this porch for occupation in the early spring I discovered a luxuriant plant in place of the dry sticks placed there months before.

“Lazarus” was planted in a shady place in the garden, and is now having a second blooming as a house plant.

I have found the poinsettias the most difficult plant to keep in a state of perfection. The red, starlike flowers are short-lived, and the leaves become yellow in spite of my efforts. I had the theory that this plant lost interest in life after its gorgeous display of color for the Christmas season, but my neighbor says that it isn’t the plants but the owners that lose interest in giving them the necessary care, and she points with pride to her own plants which certainly justify her statements. The average amateur flower grower is not so successful, however, for the result of many weeks of patient care is in most cases a few long, scraggly, leafless stalks. The beauty of this plant is so compelling that, forgetting past failures, we buy it and try it year after year. My neighbor is of opinion that most people kill these plants with kindness. They require little water, cool temperature and repose. They resent movement, smoke, and excess of any kind.

A much less exclusive plant, but one that has many devotees, is the Jerusalem cherry. This, unless it is the victim of the red spider, is easy to keep in good condition, for it asks but little here below— fresh air, cool temperature and moderate watering. An occasional sponging with kerosene will usually rout its enemy. It is not so breath-taking in beauty as some of the other plants which we have mentioned, but it is sturdy and most responsive to a little care.

The care of house plants is a beguiling pastime and is also one in which the rewards are great. It is heartening to know that by the exercise of thought and —to quote my neighbor—“using common sense” we can make the struggle of growing plants to survive very much less. 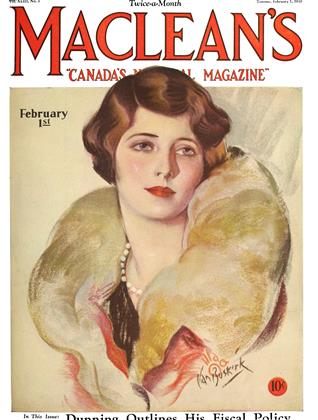