WHEN he was two years old, Earle Bailey was stricken-with infantile paralysis and lost absolutely the use of both arms. But the upthrust, the surge onward that has brought the human race the long way up from the beast, was strong in this fortune-marred son of Nova Scotia, and behind it was that craving for expression, that urge to express beauty as he sees it, which marks the artist. Yet what an agony it must have been for this boy, harried on one hand by the desire that was in him, and hampered on the other by the loss of the only organs with which the pictorial artist can give form to the thing he sees, as the years rolled over him and the long yearning period of boyhood left him a piece of flotsam on the shores of despair !

What to do with life? To lie back in the cottage window, watch the ships come and go in Lunenburg harbor and sigh for his lost strength. Or accomplish something —anything—that would join him to the ranks of laboring men and women? Yet with what weapons? What had a grimacing fate left him?

Teeth ! Teeth that could be clenched in the face of this challenge—and his courage. Always his courage—indomitable, indestructible ! He began to draw with his teeth.

Pitiful efforts, those first attempts— conventional designs, flags, arabesques. And then one day in a newspaper he came across a drawing contest—entered it. Encouragement. Gradually with those strong white teeth he began to develop a technique of expression, and life became endurable—life became as endowed with possibilities for him as for any normal boy or girl.

The years slipped by. Slowly but surely that capacity for taking pains and the courage that could not be shaken gained their reward. The teëth became more and more like arms and hands and fingers, became delicate to shade, acute to limn. But still he remained an indoor recluse, had not yet realized the possibilities of the seascapes of Lunenburg that lay beckoning outside the cottage door. And although he had dabbled in water-color he knew nothing really of color itself and its possibilities

An American artist, Katherine Cherry, came to Lunenburg one summer on a sketching tour, and learning of the struggling, crippled boy went to visit him. In the short time at her disposal that summer, she gave him what she could— opened out the possibilities of the palette,

IN AN interview given to the New York Times, Professor Alexander Silverman, head of the chemistry department of the University of Pittsburgh, makes some startling announcements as to the present achievements and future possibilities of the scientific glass industry. In the first place, he says, an entirely new field of utility for fused quartz glass is opening up, as a transmitter of longdistance light.

“Huge transparent rods of this material which will carry light from China to America and convert our night into day may be a reality in the future,” he declared.

“These same rods, running north and south, may also convey the heat of the tropics to the temperate and frigid zones,” he declared. “Such things can conceivably happen. We live in a wonder-world. We cannot even adequately dream the wonders that future generations will enjoy. We are still infants in the cradle of invention. Supermen in the research

urged him to get outdoors and paint what he could see.

The Limitations of Indoors

yAT FIRST he tried working from memory. It was not easy technically for him to paint outdoors, since he had not the necessary apparatus to take with him

in his wheel chair. So he got them to wheel him out and leave him in a setting until what he saw so seeped into his brain that he could return home and paint from memory. But that was not satisfactory— memory has too many limitations—color and line make after all too fleeting an impression. So he started in to plan a piece of apparatus that could be fastened

to his wheel chair and which could serve him as well outdoors as in. He got it built. It proved satisfactory. He began to paint outdoors.

Then he began to sell pictures, at first locally and to tourists passing through; small Lunenburg sketches, colored postcards, etc. It was Bertha Des Clayes, the Montreal artist, who urged him to exhibit

his paintings farther abroad. Since that time he has had hangings at the Montreal Art Association, the Canadian National Gallery and the Toronto Art Gallery. But, best of all, he has been able to find buyers at these places. In an exhibition at the Lord Nelson Hotel, Halifax, in September, 1929, of twenty-five paintings and water-colors he sold five on the first day. 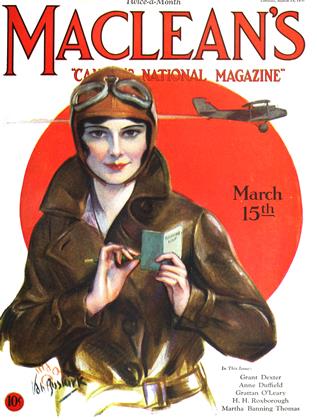