When meat is off the menu, its place should be taken by foods carefully chosen with an eye to their tissue-building qualities

LENTEN days, fast days, days when the call for variety causes us to substitute some other dish for meat, demand, beside a certain ingenuity in menu-building, some knowledge of the kinds of food which will really replace meat, not only in the sense of satisfying the moment’s hunger but in meeting the needs of the body. Meat builds tissue or muscle, so that when we take it off the menu, we should see that other foods which will replace worn-out tissues are served instead. Fortunately, there is no dearth of such foods, and they are the kinds which figure as staples in our pantries or abound upon our markets.

Fish, eggs, cheese, milk—these are rich in the proteins that build new tissues to take the place of those we are continually wearing out. As they are foods in constant use in all our homes, it is not difficult to plan main dishes from them. Even where fresh fish is not available, there are smoked fish and plenty of the canned and Iried varieties—and fish in these ever ready forms is certain to be appreciated. Nuts, too, belong to the same group of body builders; so do beans, peas and lentils. Surely a wide enough choice!

So when Lent approaches, or the desire to serve something a little different from the usual steaks, chops, roasts and stews, animates the homemaker, she may look with confidence to this list of valuable food products. The rest of the diet should be balanced just as with meat—plenty of vegetables and fruits, the usual amount of cereal and other starchy food, sugar and fat in their proper proportions.

Free the fish from skin and bones and put it through the food chopper. Add seasonings and grated onions. Blanch the almonds and chop them fine and add, with the pimento, capers and finely minced herbs. Mix thoroughly, then fold in the stiffly beaten egg whites and whipped cream. Turn into a buttered pudding mold and put on a closely fitted cover, or tie wax paper over the top. Set in a pan containing hot water and bake in a moderate oven at 375 deg. Fahr., until set, about one hour. Or if preferred, cook in steamer over boiling

water. Turn out on heated platter and garnish with cut lemon. Serve with cucumber sauce when in season, or with drawn butter or white sauce enriched with one or two egg yolks.

Fried oysters would often be more practical for quantity use, if there were an easier way of preparing them quickly. Cooking them in the oven offers the solution. The quantities may be altered as desired.

Wash and beard the oysters. Dissolve the salt in the milk, dip the oysters in it, then coat in the crumbs — use dried bread, not crackers—seasoned with the pepper.

Grease baking pan with butter or bacon dripping, and arrange oysters on it a little distance apart. Sprinkle the oysters with melted butter or fat or cooking oil, and place in very hot oven, 550 deg. Fahr., until well browned, about five or six minutes.

Have the halibut cut in steaks onehalf inch thick, weighing about a pound each. Wash the fish, remove skin and wipe dry. Grease the rack or trivet for roasting pan, place one slice of fish on it, sprinkle with salt and pepper and spread with threequarters of the stuffing mixture given below. Place the

second slice of fish over the stuffing, sprinkle with seasonings and dot with the butter divided into small pieces. Add the remaining stuffing to the top and bake in an open pan in a hot oven, 490 deg. Fahr., twenty to twenty-five minutes.

4 Tablespoonfuls of bacon dripping or butter

Melt the butter or dripping in the frying pan and fry the onion in it until tender, but not brown. Mix with the finely crumbed bread and seasonings. Add the beaten egg to the milk and combine with the crumb mixture. Mix well and use as above.

}i Teaspoonful of pepper

Prepare the cold cooked or canned fish by flaking it with a silver fork, freeing from all skin and bone. Melt the butter in a saucepan and toss the dry crumbs in it; stir a few minutes, add the milk and bring to the boil.

Mix the slightly beaten eggs and seasonings with the fish, using either pimento or green pepper, or both if you have them on hand. Or you may like to use one or two hard-cooked eggs, cut in slices and placed in the bottoms of the individual buttered ramekins or custard cups into which the mixture is turned. Set them in a pan containing half an inch of hot water and bake in moderate oven, 350 deg. Fahr., until firm in centreprobably about thirty-five minutes. Serve with a white sauce to which a few capers and, if you like, a little finely chopped onion have been added.

Whitefish or any other good fresh fish may be used; cut in inch cubes and place in a buttered casserole or a baking dish. Over this place the potatoes, cut in very thin slices, and arrange in alternate layers with the sliced onions. Season the canned tomatoes well with the salt and pepper, and cut the pulp small. A few grains of cayenne may be used. Pour this over the vegetables and cover the top with a layer of dried crumbs that have been tossed in melted butter. Bake about two and a half to three hours in a moderate oven, covering for all but the last half-hour, when the cover should be removed from the dish to brown the top.

Cook shelled chestnuts in salted boiling water until tender. Mash and measure them. To each cupful add:

1 Teaspoonful of sugar Salt and pepper to taste

Mix all well and shape as croquettes; dredge with flour, dip in diluted egg, then coat with well-seasoned dry crumbs. The croquettes may be prepared thus far, early in the day, and kept in a cool place until time to cook them. Arrange in a frying basket and lower into deep hot fat —or sauté in a generous amount of very hot fat in frying pan; drain on crumpled absorbent paper. When desired, crisp slices of fried bacon are delicious with the croquettes.

Make a white sauce first as follows. Melt the butter in saucepan, then remove from the heat and mix the flour in smoothly. Put over the fire again and gradually stir in the milk, and cook, stirring constantly, until mixture thickens smoothly. Add the grated cheese and stir until it is melted. Season with salt and paprika or with a few grains of cayenne.

Pour half of the sauce into a shallow baking dish; break the eggs singly and slip them into the sauce, keeping them well separated. Dust each egg lightly with salt and pepper, then carefully turn in the rest of the cheese sauce; sprinkle grated cheese and paprika over the top, and bake in a moderate oven long enough to set the eggs and make the top a golden brown. This dish is especially good when served with hot corn muffins.

When desired, a little devilled ham or tongue, chopped ham or bacon, chipped beef, minced sardine or shrimp, may be added.

Cut the hot, hard-cooked eggs in half, lengthwise; remove the yolks and mash them in a bowl, seasoning to taste with salt, pepper, mustard and a dash of vinegar. Refill the whites, heaping them generously. Keep hot in the oven.

Cook fresh asparagus meantime, or heat canned asparagus; arrange in groups on oblongs of buttered toast. Place with the eggs in attractive formation on a platter and pour the creamed sauce around them. Strips of pimento make a colorful garnish.

When chicken is possible, one cup cold diced chicken and a dozen or so half walnut meats may be put into the eggyolk mixture, and in this case, the flavor of the sauce may be improved by using half chicken stock and half milk for the liquid.

Salt and pepper or paprika

Melt the butter in a saucepan and cook the onion in it until tender but not brown. Add the parsley, catsup, seasonings and

beans. When desired, crisp bacon may be added to the dish as a garnish.

Melt the butter in frying pan and turn j in the very finely diced mixed vegetables | and potatoes; toss about in the hot fat until lightly browned, then turn into a j saucepan. Rinse out the frying pan with part of the boiling water and add, with rest of water, to the vegetables. Add salt and pepper to taste, the bit of bay leaf and Worcestershire sauce. Bring to boil, then reduce heat at once and simmer gently for several hours. 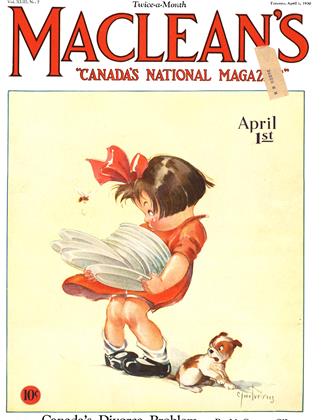