Mr. Scott, Listen to This!

I read with intense interest the article, "Is Canada going U.S.?" Being a hundred per cent Canadian who has worked in the United States, this subject is even dearer to my heart than the scenes of my childhood and for this reason I have an ear continually cocked to catch the sentiments of all and sundry who express themselves in this connection. Mr. Scott’s views are very readable, but they left me with a firm conviction that Monte Carlo is a much better place in which to lose money than to gather accurate data on national problems, particularly those pertaining to Canada and the United States. Taken by and large, Mr. Scott’s article is as full of fallacies as a sultana cake is full of raisins.

I am a stenographer; I have worked in three Canadian cities and towns; in Boston, and New York. I have looked below many a surface and I find anything but a real affinity between the average American and the average Canadian.

And if Mr. Scott ever finds himself cheerfully signing on to make props for the British Empire, I’ll wager my scanty hoard that he’ll be surrounded by just as cheerful Jack and Jill Canucks waiting to do likewise.—G.A.K., Halifax, N.S.

That’s What We Try To Do

It was refreshing to read in a recent issue of your magazine an entirely unbiased article on the situation surrounding the Peace River district and the various alternative routes to the Pacific.

Controversy is rampant regarding the advantages of the different ports. As one who has visited the country under review it appeared to me that your Mr. Hague had a thorough grasp of the subject. He was not only accurate in his depiction of the situation but showed a commendable spirit in refraining from displaying partiality toward any of the ports, all of which have many partisans who can see no merit in any route other than the one which they themselves support.

To my mind the main thing at present is to get a Pacific outlet for the Peace River district and 1 congratulate MacLean’s on the support it is giving to this project. Every port on the Pacific lias its own "on to the Peace” organizations which are working from the angle of what will benefit their own community. You have given the correct fucts about the different routes and the matter is one which should be viewed from a national and not from a local aspect.—G.B.M., Vancouver, B.C.

A Suggestion from an Art Lover

This is the first year we have had MacLean’s Magazine in our own home. We surely enjoy it. The articles and stories are splendid.

As I am very much interested in art, I read with much enjoyment "P.D.L.’s” story of Earle Bailey, the armless artist of Lunenburg. It is inspiring to read of such courage as this young man possesses, but it is the last paragraph of the article I wish to speak of. Surely there is some way that this talented, though so handicapped artist, will be given the chance for travel and study.

Will not the people of Nova Scotia, who love and appreciate art, give Earle Bailey his chance, so that he may succeed and in this way repay Nova Scotia, which as the writer says, so needs his interpretation of beauty.

I am sure a great many other readers would enjoy other articles on Canadian artists and their work.— Manitoba Student.

What is required is a Canadian statesman, who, fearlessly and without favor, will grapple this question along with some other problems that now loom as a menace before the people of Canada. Not, sir, one of your high politicians, however lauded he may be for his smartness, but a statesman who can see ahead, maybe ten to twenty years, and guide the high destinies of this Canada and place its feet in the right way of the future.— J. A. Nash, Fort Langley, B.C.

Only One Fly in the Ointment

I have been reading MacLean’s Magazine for the last year and could not now do without it. It is Canadian from cover to cover and «hould be in every Canadian home. Your March 15 issue was a “cracker-jack.” In the conclusion of the serial, "The Room with the Iron Shutters,” Anthony Wynne proved himself a remarkable detective story writer. I enjoyed Bonnycastle Dale’s article on the Newfoundland seal fisheries. His description gives one an excellent idea of how the perilous hunt is carried out.

I find only one fault with MacLean’s, the absence of poetry. In such a splendid Canadian magazine, the poets of Canada should get a chance to market their poetry. To those who wish to obtain a knowledge of Canada’s industries, resources and public life, I would say read MacLean’s Magazine.—David A. MaeCormac, Georgetown, P.E.I.

Will Somebody Please Contribute a Harp?

Although I originally subscribed to MacLean’s because I was greatly attracted by your policy of Canada first—but Canada within the Empire—and I felt in duty bound to contribute my “nik” toward the cause, I have been delighted to find that I have entertained an angel (literary) unawares. Certainly, your magazine can hold its own with any competitor from across the line in feature articles and fiction.

Faith in the British Empire is amply justified, and understanding makes for greater u^ity while unity is sound business poliep which must ensure prosperity generally. A. B. Longman, Kimberley, B.C. "Broken in the Wars’’

May I comment on a letter written by a Mrs. Thomas, as she seems to forget that there are many wounds, not seen, that the soldier suffers from. Had Mrs. Thomas been in England and had seen the soldiers leave there for France, seen the return, and the ambulance trains as they brought in the wounded, also been to the many hospitals, she would not be so ready to say they are “perfectly able to work.” I cannot think any soldier, whether pensioned or not, is ever “quite able to work,” for I have seen too much.

If a soldier is able to earn good wages as well as his pension, I am glad, as it will give him an opportunity to provide for his family and his future—as he has a right to. Does Mrs. Thomas know there are ex-soldiers who cannot even carry insurance? Indeed, they are unable to pay the premium, and does she realize the soldier pays his taxes too, the same as everybody else?

My advice to her is to visit a few ex-soldiers’ families, and learn a few truths.—Taxpayer, St. Catharines, Ont.

MacLean’s in the Schools Editor, MacLean’s:

I would like to say how much I enjoy MacLean’s. I often use it in my teaching, especially the colored pictures, some of which I have framed.

Concerning your paragraph on Page 108 of the April 15 issue on “Old Soldier,” by all means continue to publish the odd “Khaki and Mud” yarn as often as possible.

The story is good reading especially to an ex-service man of the C.E.F. and there is, I think, very little doubt that the author is putting down his views from actual experience "over there.” His allusions to the taking over of the new front, the descriptions of the captured pill box, the Sap to which the new man, Gregory, is detailed, and the march back to billets on relief, are very realistic and bring back memories of the old Ypres Salient. They could hardly have come from the pen of one who had not served there at some time and it is good to see some of the old Boys so well able to put their thoughts on paper. Keep up the good work and I hope to read another as good in the near future —J. Anderson, Calgary, Alta

You plead guilty, you say, to a “Pollyanna complex in fiction.” It is nothing to boast of. Yes, your stories are as vapid as a cup of lukewarm tea. I think you are underestimating the intelligence of the Canadian people. Even if you have no Constantin-Weyers, no Adjutor Rivards, no Louis Hémons, no Pierre Dupuys among Canadian writers of Anglo-Saxon origin, I feel certain that your readers are capable of appreciating fiction that is not trimmed as yours is with pink and blue ribbons —just too sweet for words for young ladies in boarding school. You are writing down to your readers—must be ! If you're not ... so much the worse for Canadian letters.—(Miss) Gudrun Toksvig (of Copenhagen), Montreal.

"A Pleasure and a Profit”

I have been taking MacLean’s for quite a number of years and have always liked both the tone of your articles and most of your fiction, although I did think you used to be rather weak at times on the latter, but the improvement has been steady in all departments and particularly rapid the last year or two until now you have a magazine which is both a pleasure and a profit to any one, whether Canadian or not, who enjoys good wholesome reading. MacLean’s is the only magazine we take and I would like to see it in every home in Canada and if it was, there would be more real Canadians in Canada. —J. R. Coulter, Calgary, Alta.

Ah! We Feel so Good!

I feel compelled to pen a few words of praise for your magazine, although I find it difficult to say anything original. I can only repeat what so many thousands of my fellow readers have said, namely, that MacLean’s Magazine stands out as a bright and shining star in the firmament of magazinedom. I would like to think that some day it will be a welcome guest in every Canadian home. Personally, I would not be without it for anything, and to think that for the trifling sum of $3.00, I am going to get 48 distinct and separate thrills, well, it’s almost like getting something for nothing. Hoping that your presses will have to work overtime to keep up with the demand.—W. O. F. H., Montreal.

One for the Financial Editor

The writer, who is a business man of Montreal, has read Mr. Blue’s article on "Business and Investments” in MacLean’s Magazine. Thoughtful and helpful articles of this kind are worthy of prominence, and wide and careful reading.

In the writer’s opinion, the proper use and value of money is one of the most important subjects before the people of Canada—and should commend itself to statesmen, public speakers, writers, preachers, teachers, employers, and the heads of families; and any time spent by them in making known the benefits of thrift and foresight in money matters will be well repaid.—George H. Jenkins, Montreal.

Bring on Your Mud

I always read a “Khaki-and-Mud” yarn first, if there is one in an issue.

I hope you continue printing that type of story, together with naval and sea yarns.—Geo. Stephens, Montreal. 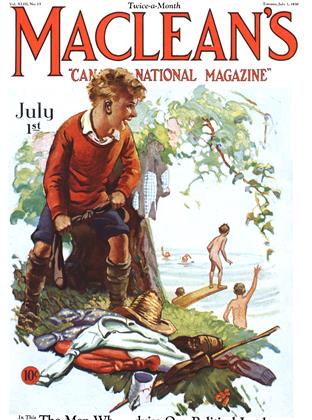