Grammar in the Air—Colonel Lindbergh, flying in Panama, made only a brief stop at Colon. Grammatically correct.—Fernie Free Press.

Sock!—“A sharp nose indicates curiosity,” says a physiognomist. Yes, and the flat one may indicate too much curiosity.—Fredericton Gleaner.

This Modern World—Labor-saving devices that enable the wife to escape drudgery include a bridge party over at Jane’s.—Stratford BeaconHerald.

Chivalry Awheel—We know a guy who is so polite that every time he passes a lady in his car he takes off his radiator cap.—New Westminster British Columbian.

Old Stuff!—A machine for seeing through a man has been invented. Seems to us the invention follows one made some years ago from a rib.—Port Arthur

Page Tin Pan Alley—A writer complains that nowadays popular tunes get on the wireless, on the gramophone, and on the talkies. And, he might have added, on the nerves.—The Humorist.

Them Was The Days—There is little true amateur sport now such as there was when the boys took up a collection to hire a pitcher to lick a rival town.—Toronto

Horse Wisdom—The true value of horse sense is clearly shown by the fact that the horse was afraid of the automobile during the period in which the pedestrian laughed at it.—Vancouver Star.

Steak—A jewellery salesman named ¡ Hamburger was robbed of $100,000 by New York bandits. We are still waiting for someone to rise and remark that they got the gentleman’s stake.—Edmonton Bulletin.

Insurance—In view of the fact that it is now fashionable to insure any part of the body essential to one’s profession, it is significant that so far no politician has done anything about his brain.— Morden Times.

He Knew—A terrier sat quietly through a wedding ceremony at a register office. A cynic suggests that the intelligent animal probably realized that there are worse prospects than a dog’s life.— Brantford Expositor.

The Eternal Alibi—A fairy story pageant was held here recently, and it is understood that many married men attended in the hope of picking up a substitute for the well-known “I was detained at the office” story.—Rosetown Eagle.

Beauty Note—Some women always manage to look young. Others dye in the attempt.

babies still,” says a novelist. The trouble is that babies so very rarely are.—Oshawa

Presents—Absence makes the heart grow fonder. Curious that presents should have the same effect.—Vancouver

Terrible!—It might be worse. Just think if you had to work up a lather before you cut the lawn.—London Evening Free Press.

And Then Didn’t Take Notea—

Thieves who broke into a shop only took the silver. Wise thieves avoid coppers.— Toronto Globe.

Short and Sweet—Brevity is the soul of wit, which of course explains why there are so many jokes about abort skirts.— Calgary Herald.

Good and Bad. Taste—Nine out of

ten patients take their medicine religiously, says a doctor. We suppose the other one swears dreadfully.

Critical Cal.—"No utterance is quite as easy as criticism,”—Calvin Coolidge. He’d better try that one on his wife’s new dress.—Montreal Gazette.

Chance for Inventors—The office needs one more labor-saving device. You still have to lift your feet to the desk by main strength.—Toronto Globe.

Ready Reference—The really up-todate cook book has a 'blank page in the back on which you can write the phone numbers of nearby delicatessens.

Disappointing—A disappointing thing about our neighbors’ children is the fact that they never turn out as bad as we expect.—Ottawa Citizen.

Tut-tut!—It is an indication of carelessly executed housework when a woman has to empty her husband out of the vacuum cleaner.—Montreal Herald.

“Glee,” Forsooth!—A glee club to be composed of bank managers is being formed. They ought to find no difficulty about holding a note, anyway.—Sault Ste. Marie Star.

Only too Well—A London magistrate declares that a husband should be master in his own house, or know thè reason why. Most husbands know the reason why.—

That’s Why—A well-known millionaire sportsman confesses that he ha^ never yet entered a night club. This, nd doubt, explains why he is still a millionaire.—Brandon Sun.

Garden Hints—“In each cucumber hill I plant a nasturtium and am nevei bothered with bugs.”—Household

We did that once and weren’t even bothered with nasturtiums! 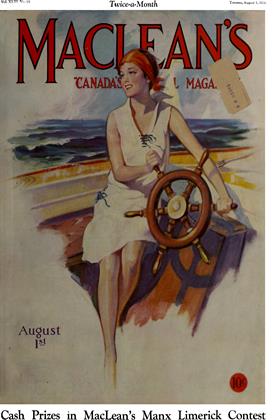