WORLD-WIDE discussion concerning the future of India has been aroused by publication of the Simon Report which represents the findings of a commission appointed by the British Government to consider the question of a larger measure of self-government for Britain’s great empire in the Far East.

India has a population of 320,000,000, speaking about 222 languages and dialects and professing seven different forms of faith, one of them having 2,300 castes or social divisions. Obviously, to please everybody in such a country is a peculiarly formidable and knotty problem even for the most resolute statesmanship, and the world’s Press has not been slow with its criticisms of the Simon plan for creating an All-India Federation to foster “progressive realization of responsible government." Briefly, the Simon programme lists these among its leading features:

“A reformed Indian Constitution, proposing an All-India Federation to include both the states of the Indian princes and the British-India provinces.

“Separation of Burma from India to become a self-governing dependency. (Burma is larger than France, and has a population of over 13,000,000.).

“Authorizing a central or Federal government, responsible to the British Crown, consisting of a Federal Assembly elected by Provincial Councils by proportional representation to take the place of the present Legislative Assembly, and the Council of State of elected and nominated members.

“Federation to begin with states and provinces that can agree on ‘common interests’ to be served, and others to join when they decide to do so (after the manner of Canadian federation).

“Legislative and financial powers of the two chambers to remain as at present, except that the Federal Assembly may vote certain indirect taxes, collect and distribute them among the member states and provinces.

"Governor-General to have added authority to appoint Executive Councillors.” As the Commission favors the separation of Burma from any new Constitution for India, the Spectator predicts that “the future of India must be in the nature of a Federation, held together by that spell, or bond, of inclusion in the British Empire which has never failed to be infinitely stronger in practice than in theory.” Among the provisions for regional local government, the principal recommendations of the Report include the following: “State and Provincial units of the Federation to have the maximum of ‘progressive’ local autonomy ‘consistent with the common interest of India as a whole.’ “The dyarchy system, which excludes Indian ministers from certain departments, to be terminated.

“Widened franchise, treble the electorate, including more women—increase from about two and a half to ten per cent of the population—for electing provincial legislatures. Reservation of seats for representatives of minority and depressed classes.

“Conduct of provincial administration by provincial Cabinet, appointed by the Governor, who shall have full powers of intervention in the event of a breakdown, subject to the direction of the GovernorGeneral.

“Special provisions for the Northwest Frontier Provinces on the line of international defense.”

For Imperial defense, the Commission proposes:

“The Army to be removed from Indian Government jurisdiction, and placed under the Governor-General representing the Imperial authority, since ‘India and Great Britain are so related that Indian defense cannot now or in any future which is within sight be regarded as a matter of purely Indian concern’.”

In order to smooth the way for coming Federation of the United States of India, the report recommends creation of a council for Greater India by the Crown, this to consist of representatives of the states and British Provinces, an advisory and consultative body for promoting closer association in matters of common concern for India as a whole. This body would deal with:

"The customs tariff of British India; the salt tax; any other form of central taxation affecting the Indian states; railway policy; air communications; trunk roads; post and telegraphs; wireless; currency and coinage; commerce, banking and insurance, so far as the matters raised affect both the states and British India; opium policy; Indian overseas; matters arising in connection with India’s membership of, and participation in, the League of Nations.”

Editorial comment is favorable to the major findings of the Commission, with reservations of one kind or another, such as that of the Spectator which says:

“If the report should have the good fortune to become the foundation on which a new India is reared, prosperous, contented, and proud of being a member of the British Commonwealth of Nations, it will be referred to in history as one of the greatest of state documents. But we cannot be sure that this is its destiny.” The New York World concludes its compliments with the statement that “perhaps the solution it offers comes too late. Britain would be in a happier position if she had started this machinery ten years earlier. But it is a sincere approach to a colossal problem.”

And in a current editorial criticism, the Boston Globe remarks:

“The important, if intangible, element of human desire for liberty is not ignored, but its explosive power is. And that element is quite as vital to the situation in India today as it was in 1775 in this country, in 1789 in France, and in 1917 in Russia.

“It will be tremendously interesting to see how India reacts to the Simon recommendations.

“The whole future course of her national fate turns on this forthcoming decision.”

Not independence, therefore, nor yet Dominion status is India to be granted under the proposed new Constitution, but a form of supervised government, for which the Rt. Hon. V. S. Srinivasa Sastri expresses the hope that “the united wisdom of Great Britain and India will find a way out of the present difficulty, of better promise to their honor and prosperity and the benefit of the world at large.” 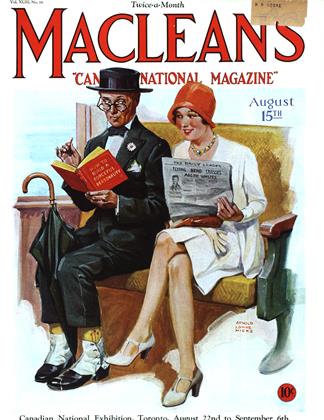