Maybe Adam Laughed at These January 1 1931

Hard Work—Village Postmistress: “I ought to ’ave some assistance ’ere durin’ the summer months. Sometimes I don’t get through readin’ the postcards before ten o’clock at night.—Vancouver Star.

Tarred and Feathered — “Doggone, here we are running over freshly tarred road again.”

“Be philosophical. Pray you don’t hit a flock of chickens.”—Montreal Herald.

Fast Thinkers—A feminine lecturer, speaking from a Chicago broadcasting station, said that bachelors have absolutely no excuse for living.

Husbands on the other hand have to have several every day!—Border Cities Star.

Telling Him—She: “When a man who bores me asks where I live I always say, ‘In the suburbs.’”

She: “In the suburbs !” Stirling

Horrible—“Lady,” said Mike, “would you lend me a cake of soap?”

“Do you mean to tell me you want soap?”

“Yes’m. Me partner’s got de hiccups an’ I want to scare him.”—Stratford BeaconHerald.

A Poor Risk—Persistent Suitor: “If you’ll marry me I’ll take out a big insurance policy on my life, so that you’ll lie well provided for.

Celebrity—Kitty: “Did you see my photo in the paper yesterday?”

Kat:“No! What were you cured of?”— Dundas Star.

He Knew What He Meant—“I saw

“You mean the talking movies.”

“No, I saw a bus filled with women.”— London Free Press.

Sure System—George: “Gambling’s too risky; you should give it up. One gains one day and loses the next.”

Georgina: “Well, then it’s easy. Play every other day.”—Ottawa Citizen.

Art Critics—First Charlady: “You know, dear; what do you call those drawings that are all scratches?”

going out in the car on Sunday, ma’am?”

Scientific—“John,” said his wife, “I found some very queer looking tickets in your desk today. One said, ‘Saddle, eight to one.’ What does it mean?”

“My archaeological studies, my dear,” he answered. “Relics of a lost race.”— Vancouver Province. 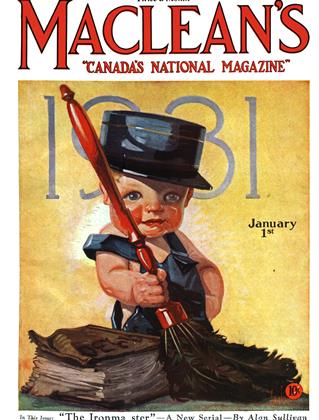