We’ll Try Not To, But You Make It Very Difficult

I have just read Dent’s “Judgment.” Well—better tell Redvers to stick to his war stuff. This story was accepted because it was odd. It looked good at first, too. But then it turned into nothing but a fantastic mixture of humbug and, almost I would say, sacrilege. I hate to bat you one; for I am a friend. So don’t fall to weeping!—F. M., MacNutt, Sask.

Ye Gods! What Eyes These Robinsons

Pardon me one minute while I heave a brick. I greatly admire the work of E. J. Dinsmore as an illustrator. However, may I suggest that the next time he decides to illustrate something of a marching nature he consult some “Old Sweat" to make sure the feet are handled properly. In looking over the main illustration of “The Beggar of Ur” (September 1 issue) I note the slaves carrying the litter are “in step.” If Mr. Dinsmore would interview some old time stretcher bearer he would find that this particular stunt is done “out of step.” Perhaps to make sure he might get a pair of fellows who packed the out for “Blighty” to demonstrate the difference of “in step” and “out of step” with himself as the passenger. I prophesy a case of mal de mer before he has travelled far with his bearers “in

Having relieved myself of these few kind words I shall now ask to be excused as I am anxious to find if any fresh herring scales are cluttering up your present issue.—Will Robinson, Terrace, B.C.

My husband had a heavy cut in his salary yesterday and it will be necessary to retrench in every possible way, but I simply cannot sacrifice MacLean’s. Here’s wishing the-best for the best paper in Canada.— W. F. W., Montreal.

As “Business Woman” probably spent twenty years in one line of business, perhaps her knowledge of business is rather limited after all. She speaks of a boss as a cold, unfeeling creature, but surely employers, like other people, are not all alike.

This woman, having followed a business career, is hardly in a position to know very much about the joys and troubles of a married woman’s life. What does she know of the years, when the babies were small and the mother never knew a night’s unbroken rest, or of the constant struggle to make the husband’s salary spread out far enough to cover the payments on their little home and feed, clothe and educate the family, to say nothing of doctors' bills and other unforeseen expenses? She imagines that while she is toiling over dry books and accounts her married sister is taking life easy. That may be true of a favored few, but there are very few in this class, among working people at least.

I do not advise girls to choose business as a life work. Home and family are a woman’s natural sphere, but girls should be taught some congenial work whereby they may earn their living between their school life and their marriage.

In your issue of July 15, the query, “What is the name of Canada’s oldest university?” is answered, “Dalhousie.”

The University of King’s College was founded at Windsor, N.S., in 1790 and is therefore the oldest college and university in the British possessions overseas. It was further protected by Royal Charter granted 1802.

The Earl of Dalhousie came to Halifax in 1816 and within a few years, appreciating the need of higher education for a class of lads whose financial circumstances did not permit of their going into college residence as was the regulation at King’s College, he therefore thought “a college on the same plan and principle as that of Edinburgh” would prove more beneficial to them. To that end he devoted his energies, and Dalhousie College was opened in the early 1820’s.

There have been a number of efforts to amalgamate the two colleges, nothing definite being done until after the college buildings at Windsor were destroyed by fire. After long negotiations it was agreed that King’s College rebuild on the Dalhousie Campus, Halifax, thus extending in power and usefulness this Maritime University.— Sophie J. Wilson, Halifax.

I read Lieut.-Col. George A. Drew’s article “Salesmen of Death” on the same day that I had been studying the life of Joseph in the book of Genesis.

It struck me that those who have the

appointing of men for the World Disarmament Conference might do well to take a lesson from Pharaoh and appoint George A. Drew to represent Canada at that conference.—J. A. Ross, Richards Landing.

I have just read with intense interest the article, “Salesmen of Death” by Lieut.Colonel George A. Drew.

As a member of the national committee of the League of Nations Society in Canada, which was appointed to deal directly with the question of rousing public opinion to a realization of the importance of the coming Disarmament Conference, I have been especially anxious that some capable person should, through the public press, attack the question of competition in arms so as to expose it in its most sinister and subtly concealed form, the manufacture and sale of the implements of destruction. Colonel Drew has done a very great deal to advance the cause of disarmament through international agreement in his masterly exposé of the insidious spread of international distrust by agents of colossal financial interests bent on creating a market for their materials of war and death.

MacLean’s is to be most heartily congratulated for having been the medium of conveying this definite and challenging information to its large numbers of readers throughout Canada, and so doing immeasurable good in helping to create a Canadian public opinion which will lead our representatives to take very active measures for the promotion of world security when they speak for Canada at the Disarmament Conference in Geneva next year.—Lilia Muriel Kerr, Associate Editor, The Educational Courier, Ottawa. 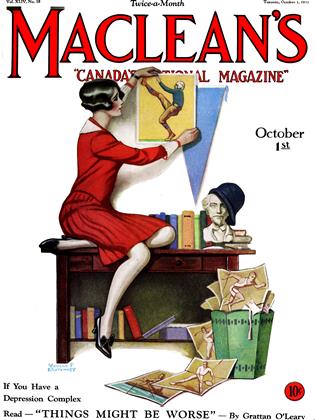