Churchill, Sept. 18.—Plowing a new furrow in the field of Empire trade, a British steamer laden with Canadian grain pressed out across Hudson Bay tonight, Churchill-to-London-bound. Inaugurating overseas shipment from the newly built sea outlet from the Prairies, the Farnworlh cast off its moorings at 10.30 a.m. today, and in a quarter-hour had been piloted out into the broad Ray waters.

Slightly more than half of the 545,000-bushel trial shipment of Saskatchewan wheat weighted down the roomy holds of the Farnworlh. Loading of the remainder into the equally capacious sister ship, the Warkworth. commenced this afternoon when the smoke from the funnel of the history-recording Farnworth had faded in the northeast sky. The Warkworth sails next week.

TURN back the clock for twenty-one long and eventful years. Back to the beginning of the enterprise, the culmination of which was chronicled in that 1931 Canadian Press dispatch. Back to a memorable scene on a sombre September morning in 1910, when a score of whites—the majority grey and grizzled by years of “roughing” —and some two hundred sphinxlike red men stood in the misty rain on the banks of the wide, winding Saskatchewan and witnessed the inauguration of what, even then, had been a dream of years.

Once more was being enacted the old story of a new country—the strange, sullen struggle of the wild against modern monarchs of civilization and commerce in their quest for other worlds to conquer. When the Hon. George P. Graham, then Minister of Railways in the Laurier administration, that day turned the first sod of the projected Hudson Bay railway, the primitive Keewatin settlement of The ■ Pasbecame a community of yesterday and of tomorrow. It passed at once from the yesterday of a lonely pioneer trading post into a morrow pulsating with big, busy possibilities.

The indomitable red man, whose sense of Nature's intent is an instinct, long since selected this spot as a camping ground, the homing point of his expeditions into the fastnesses of the farther north. He builded here his rude habitation. He called it Pasquia, “the meeting of the highlands,” and founded the tribe of that name. For years he lived and moved and had his being in his own way, disturbed alone by the whisper of the wind, the sob of the stream, and the sway of surrounding spruce.

Then came the new white world—the missionary, the Hudson’s Bay Company’s trading outpost, and finally the railway; ninety long miles of winding steel over rock and muskeg, through thickly-wooded, picturesque country, linking the Indian settlement southward to Metiomami, and subsequently to Hudson Bay Junction. And now. onward, unhesitating, insatiable, civilization was reaching out for the waters of the far north. The wild, in silent, stoical protest receded, as it always does.

The path of progress exacts its toll of sacrifice. There was a touch of the tragedy of the last look on the faces of the aged weather-beaten whites as they watched the representative of their Government plant his spade in their soil. They seemed to realize something of what must be when captains of industry, leaders in enterprise and endeavor—not to mention real estate brokers—discovered this ideal site for a divisional point on the new commercial highway. On the shore were beached two score and more birch-bark canoes, and the dusky faces of probably two hundred Indians—exiles-to-be — peered in curiosity from the background of the dense foliage.

Veiled in the serious, slow-spoken words of the silver-haired octogenarian, Antoine Constante, chief of the Pasquia band of Indians, a picturesque, erect figure, wearing saucer-sized medals and embroidered regalia, was a note of pathos. He spoke in Cree, but Gideon Halcrow, another veteran who for sixty years had held the post of factor, acted as interpreter and communicated his message to the Minister: “You have been too long in coming. We are old. Our faces are wrinkled. Our hands are hard from years with paddle and axe. Our children travel your steam trail. We will not see the finish.”

A WINNIPEG confrère and the writer -TA. were the two newspapermen privileged to witness the remarkable and memorable scenes that distant day on the slope leading down to the southern bank of the Saskatchewan just below the mouths of the Carrot and Pasquia Rivers. The latter had been dispatched by the Toronto Globe to the primitive, little-known regions of the lower Keewatin territory to tell its readers of the plans and the prospects for the projected railway. By one-horse wagon, by foot, byYork boat—then the chief transport of the northern rivers, propelled by six sweeps and directed by a seventh—and by canoe, travel was accomplished. And ever and anon the silent, soft-moving red man was encountered, jealous of trespass on his preserve, yet always ready to trade his spoils from land and water and—when he understood what was said—willing to listen stoically, with no show of interest or enthusiasm, to tidings concerning the coming of the “steam trail.”

The early Indian trading post was given geography as “Pas Mission” with the establishment of a pioneer Anglican mission, subsequently succeeded by a Catholic mission and a joint school. These at that time were ancient frame buildings, peculiar interest attaching to the primitive Anglican sanctuary by reason of the fact that the pews and ornamental work of the interior were made by hand by the members of Sir John Franklin’s exploration party. In front of the home of the Anglican missionary of that day, Rev. Albert Fraser, still stood —as it stands today—the sundial presented to the mission by Franklin himself. The growth of flowers, foliage and fruit, where the soil had been tilled and cared for, gave amazing testimony as to climatic conditions.

A ND now the railway is built, trains are Tx running, elevators have been erected and the first vessel has sailed grain-laden for Britain from the northern terminus of Churchill. What of the future?

There are pessimists—there always are. But this never was an enterprise for the Doubting Thomas. It was the project of men of vision, men of faith, men of daring, men ambitious that Canada develop her full stature. There have been—and there will be —difficulties and perplexing situations.

Someone has said that luck is a very fine word if one puts a “p” in front of it. When years ago the Ontario Government undertook the construction of the Temiskaming and Northern Ontario Railway, to open up the hinterland of the province, there were many pessimists. But those in charge went on undaunted, and a great silver field was uncovered. There have been rumors of gold finds in the unknown districts tapped by the Hudson Bay Railway.

There are many secrets which Nature has doubtless hidden away in the rocky fastness of the far north. Perhaps it may be the portion of those indomitable spirits who eagerly and fearlessly grapple with the unknown to lift the veil off other things worth while. Who knows? 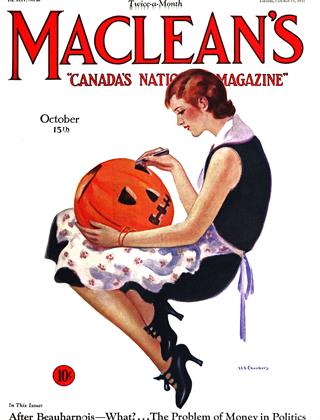