To convert cheap ingredients and left-overs into good soup is no mean accomplishment, yet the art is not difficult to learn

SOMEONE has said that “the French are a nation eminent in soups.” Tribute indeed to the thrift and culinary skill for which the housewives of France are renowned! It is no mean accomplishment to take an inexpensive soup bone, a few fresh vegetables, some odds and ends of left-overs, a little rice or barley, to blend and discreetly season them, to cook and achieve a dish of appetizing fragrance and flavor. Yet the art of soup making is not difficult to master.

Soups may be divided into two main classes; those with meat or vegetable stock as the foundation and those in which milk is the liquid. Both groups include many varieties and many flavors. Clear soup, of which bouillon and consommé are examples, are highly seasoned, clarified meat stocks. Broths have the same basis, but are unclarified. Cream soups and chowders are made with milk, vegetable pulp or diced vegetables or shredded cooked fish.

A hearty dinner is well begun by a clear, thin soup, for the flavorful liquid serves as an appetizer and an aid to digestion. On the other hand, the thicker, richer soups which contain small pieces of meat or vegetable pulp are highly nutritious and are therefore more appropriate as the main dish of

luncheon or supper. Thus we see that the ingredients and the type of soup determine its place in the menu, and the housekeeper will take these points into consideration when planning the

MEAT stock may be made from beef, veal or poultry. Smoked or corned meats are not suitable on account of the pronounced flavor. Of course left-overs of meat may be used—the end of a roast or the skeleton of a fowl; these in combination with some fresh meat are splendid for the soup pot. Use the ham bone for dried bean or pea soup. If beef is used; select a shank or brisket, for though these are cheaper cuts they are juicy and make soup of excellent flavor. About two-thirds lean meat to one-third of bone and fat is a good proportion for soup making, and sometimes it is well to purchase a small piece of stewing beef from the neck to provide extra lean. Cut the meat into small pieces, put it with the bone or fat into a large pot or kettle, and cover with cold water, using from one pint to one quart for each pound of solid material. Allow this to stand about one hour in order to draw out the juices from the meat. Then heat slowly and simmer—do not boil—from four to six hours. Do not skim the liquid while cooking unless a clear soup is desired, for in doing so a good deal of the nourishment is discarded.

A brown stock which is somewhat more flavorful is made by first searing and browning about one-third of the lean meat. To do this, heat a frying pan very hot, grease with a little fat, and add the meat cut into small pieces. Stir con-

stantly until all the surface is well browned, and after the remaining meat and bone have been soaked in cold water the required time—one hour—add the browned pieces and cook as directed above.

During the last hour of cooking, vegetables and seasonings are added. Carrots, cabbage, turnips and tomatoes are excellent soup vegetables, and among the suitable seasonings are peppercorns, bay leaf, cloves, a sprig of thyme or parsley. Barley, rice, tapioca, sago or other cereals are used for additional flavor and nourishment, while split peas and beans are useful in soup making. For further variation, a few drops of Worcestershire or other prepared sauce may be added just before serving.

When all the ingredients have cooked sufficiently, the stock should be strained and cooled in an uncovered pot as quickly as possible. The extra fat will form in a cake on top, and as this helps to preserve the stock it should be left on until the liquid is to be used. It is easily removed by loosening the edges and lifting; any remaining portions can be wiped off with a damp cloth. If, however, the soup is to be served at once, and time does not permit cooling it, skim off with a spoon as much fat as possible, then pass tissue paper, a crumpled paper table napkin or towel over the surface to remove the small droplets which remain. Another effective way to do this is to wrap a piece of ice in a cloth and skim the top of the liquid; the fat will solidify and adhere to the cooled damp cloth.

To clarify soup use egg white and shell—one egg white and shell to each quart of stock. Heat slowly, stirring constantly, until the boiling point is reached. Boil for one minute, then simmer until a scum forms. Let stand for about five minutes, then strain through a piece of cheesecloth doubled over a fine sieve.

SOUPS without meat stock usually have a milk basis.

The method of making is the same as for cream sauce, and care must be taken to prevent lumps forming. Add to this the prepared vegetable, which may be almost any variety or any desired combination. Here is a good oppor-

tunity for using left-overs and for utilizing the water in which vegetables are cooked. This water is rich in minerals and vitamins, and the really economical housekeeper saves it for the making of soups and sauces. In a chowder the vegetable or fish is finely diced or shredded.

Canned soups embrace many varieties and many flavors. They require a minimum of preparation, and their good quality has won them a very definite place in the housekeeper’s supply of staples.

Soup may be served hot, cold or jellied. Interest may be given by the use of different garnishes. Tiny rounds or triangles of toast may be spread with grated cheese and placed, one in each bouillon cup. Macaroni ¡ in fancy shapes may be cooked separately i and added to the soup before serving. Do not cook macaroni, spaghetti or vermicelli in the broth, as it makes the liquid cloudy. Strips of green pepper, pimento or hardI cooked egg white, asparagus tips or small sections of cauliflower also make attractive garnishes. Grated nippy cheese may be sprinkled over the top, and a spoonful of whipped cream may decorate the dish.

The enjoyment of the meal is assured if it begins with a steaming bowl of soup which, in the language of another nation famous for its broths, “smells an’ smacks sae brawly.”

About two pounds of beef shank, (meat and bone)

Have the bone sawed into several parts and cut the meat into small pieces. Brown one-third of the meat in a hot greased pan, add to the remaining meat and the bones, and cover with the water. Let stand for one hour; then heat slowly to the simmering point. Cook below boiling for at least three hours. Chop the onion, carrot, celery and parsley, and add with the seasonings to the stock. Simmer for an hour longer. Strain through cheesecloth and allow to cool uncovered. Remove the layer of fat just before reheating.

I Use knuckle or breast of veal or chicken, and proceed as for brown stock without browning any of the meat. Any desired vegetables and seasonings may be used.

1 Egg white and one shell y Cupful of cold water

After the fat has been removed from the stock, add the beaten egg white and the crushed shell. Mix thoroughly, heat gradually to boiling point, stirring constantly. Boil gently for five minutes, add the cold water, allow to settle and strain through a thick cloth.

Cooked and drained macaroni, noodles, rice or barley may be added to the clear stock, reheated and served.

quarter cupful of cold water and dissolving in one quart of hot consommé. Pour into bouillon cups, chill and before serving beat with a fork.

1 Pound neck of mutton, (bones and

Cut the meat from the bones, removing the fat, and place in a kettle with the vegetables which have been chopped fine. Cover with the three cupfuls of hot water and allow to cook slowly, adding the barley when the mixture begins to simmer. In another kettle, cover the bones with the cold water; bring gradually to the boiling point and simmer for one and a half hours. Strain the liquid from the bones into the soup, and thicken with the flour which has been blended with the butter. Season to taste with salt and pepper if desired and serve hot. Six servings.

2 Cupfuls of milk Salt and pepper to taste

Wash the peas and soak in cold water overnight. Add the liquid in which ham has been cooked, the water and seasonings. Simmer until the peas are soft—three to four hours—then rub through a sieve. Melt the butter, blend in the flour, and add a little of the hot strained mixture. Combine well and add to the soup, stirring constantly until thickened. Add the milk, season to taste and bring to the boiling point. Twelve servings.

Dried beans may also be used in this way. If ham liquor is not available, replace it with an equal quantity of water and cook with a ham bone or an end piece of ham.

1 Can of tomatoes or three cupfuls of juice

2 Cupfuls of beef stock or canned

Add the onion, celery and seasonings to the tomatoes and simmer for fifteen minutes. Strain, add the stock or canned bouillon,

Cook the prepared vegetables in the fat until lightly browned, add the water, cover and simmer for one hour. Add the parsley and the seasonings and milk or water to make up to two quarts. Serves eight.

Other combinations of vegetables may be used including tomatoes and if a thicker soup is desired, add two tablespoonfuls of soaked barley when the boiling water is added to the vegetables.

1 to 2 Cupfuls of vegetable pulp

4 Cupfuls of milk or part milk and

1 to 2 Teaspoonfuls of salt Pepper

Cook any desired vegetable in boiling water until soft; save the water and run the vegetable through a sieve. Melt the butter, blend in the flour and gradually add the hot vegetable water. Cook until thickened, stirring frequently to prevent lumping, add the milk and the vegetable pulp. Reheat and serve. Celery, asparagus, carrots, spinach, onions, peas, com and other vegetables may be used alone or combined as desired. In making potato soup, reduce the amount of flour as the starch of the potato acts as a thickener. In making cream of tomato soup, prepare the thickened milk mixture first and add the hot strained tomato to it very slowly to prevent curdling.

4 Cupfuls of milk 2 Slices of onion

Scald the milk with the onion in a double boiler and remove the onion. Melt the butter, blend in the flour and add the scalded milk gradually. Cook over hot water until thickened, stirring constantly. Add the seasonings and the grated cheese and stir until the cheese is melted. Into this stir the beaten egg yolks, beat with a Dover beater and serve at once. Six servings.

2 Cupfuls of boiling water 1 Can of com

3 Tablespoonfuls of butter 1 Teaspoonful of salt 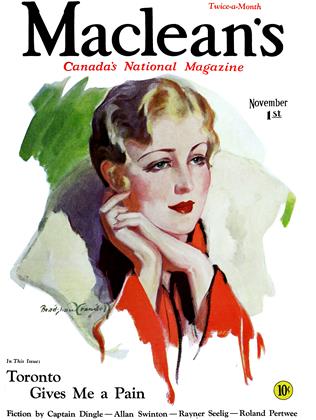