IN THE December fifteenth issue of MacLean's two gentlemen officially prominent in amateur sport circles published replies to my article “Bootleg Amateurs,” printed in MacLean’s for November first. One opponent was W. A. Fry, now a member of the executive committee of the Amateur Athletic Union of Canada, formerly a president of the Canadian Amateur Hockey Association. The other was H. H. Roxborough, a member of the registration committee of the Ontario Amateur Athletic Association, which is affiliated with the A. A. U. of C.

Mr. Fry’s manifesto was issued as the official answer of the Amateur Athletic Union of Canada to charges of professionalism in “amateur” hockey, contained in my article. It was read before delegates to the annual meeting of the A. A. IJ.of C., assembled at Vancouver, last November. It was accorded their blessing and forwarded to MacLean'e for publication as their reply to “Bootleg Amateurs."

Such official attention is flattering, but the implied rebuke disturbs me not at all, because, in so far as the article “Bootleg Amateurs” is concerned, Mr. Fry’s sonorous paragraphs have nothing whatever to do with the point at Issue.

According to my count, there are, in Mr. Fry’s reply to “Bootleg Amateurs,” 987 words. Not one of those 987 is the word “hockey.” The game with which “Bootleg Amateurs” was wholly concerned is not once mentioned in the official answer to that article.

Mr. Fry covers a lot of ground, but he stayá off the ice entirely. He discourses profoundly upon the youth of Canada, the unfortunates and the underprivileged. He admires Rotary, Kiwanis, Gyro, Lions, Daughters of the Empire, Home and School Clubs, Children’s Aid Societies, and Women’s Institutes. He speaks highly of Schools for the Blind and Institutes for the Deaf.

He mentions the power of the Press, the majesty of the Law, the peerlessness of Percy Williams, and the magnificent achievements of the Amateur Athletic Union of Canada.

But he doesn’t say a word about hockey. If Mr. Fry's 987 word statement is a reply to “Bootleg Amateurs,” Mark Antony’s oration over the corpse of Caesar is the solution of Einstein’s theory of relativity.

Y\ JITH Mr. Roxborough, I am on more * * difficult ground. Mr. Roxborough is not only an amateur official, but he is a skilled writer and an adroit special pleader as well for whatever passes for amateurism, anyw'here, anytime.

But, if Mr. Roxborough will permit me to say so with all respect for his experience and ability, his very adroitness destroys his case in defense of the present status quo in amateur hockey. He differs with me on minor facts, and holds certain opinions antagonistic to mine on certain unimportant phases of the situation; but he admits, himself, that there is too much chicanery abroad in amateur hockey for the good of the game, and he, himself, speaks out loudly for drastic action by the Quebec Hockey Association and the Canadian Amateur Hockey Association, in connection with one of my leading examples of malpractice, cited in “Bootleg Amateurs.”

Obviously, this amateur hockey official is not satisfied, as is Mr. Fry, that all amateur athletes are filled with sweetness and light.

To me, Mr. Roxborough’s clarion call

for an investigation, in 1931, of events which transpired during the season of 1929-1930 is a striking demonstration of the utter futility of present amateur control of hockey. If officials of the Quebec and Canadian Hockey Associations did not hear last season the rumors of w'hich Mr. Roxborough speaks, they are a remarkably deaf outfit. It is inconceivable that men active in amateur hockey circles, constantly in contact with hockey players and officials of amateur leagues, could remain unaware of these widely circulated and circumstantially supported reports.

If the amateur hockey officials did not know what was going on under their noses last season, they are so lacking in intelligence that they are unfit to hold responsible office. If, knowing, they failed to take action, they are remiss in their duties. Action at this late date, whether it resulted in a general house cleaning or a generous coat of whitewash, cannot, paraphrasing Mr. Roxborough, enable amateur hockey to retain public esteem.

A NOTHER striking example of the charming naiveté of the amateur official’s habitual state of mind is found in Mr. Roxborough’s reply to my suggestion that the hockey tourist was still a prominent factor in the situation. He reproves me sternly, and is at some trouble to explain that there are very strict rules against touring. Yes, I knew that before. But, there are also ingenious devices for beating those rules, which are frequently and repeatedly employed. Mr. Roxborough in his official capacity as a member of the Registration Committee of the O. H. A., should know far more about that aspect of the situation than I.

Mr. Roxborough entirely ignores one of my main contentions, which is that the player is the man who brings the money into the rink, and so, is entitled to a fair share of whatever profits are made. He insists that it Is better to make new and more stringent regulations than to accept the fact that the present regulations cannot be enforced, and to so modify them that, honesty will be encouraged and perjury made unnecessary. If this is the official frame of mind, then the situation is hopeless, because, with gates getting bigger and interest keener each season, strict amateur principles can no more be enforced in Canada than the prohibition law can be enforced in New York.

There is one other thing Mr. Fry’s official manifesto suggests that criticism of present amateur control is invariably based on ulterior motives, and comes from “pens which have a personal axe to grind.”

Well, I never saw a pen grinding an axe, but if Mr. Fry means me, he is in error, and owes me an apology.

I wrote “Bootleg Amateurs” because I thought it needed to be written in the public interest and because I hoped the editor of MacLean’s Magazine would buy it from me.

I am a journalist. Some years ago I played games, always for fun and always as a strict letter-of-the-law amateur. I am not connected with professional or amateur sport in any capacity whatever,

Both Mr. Fry and Mr. Roxborough are officials of the present amateur hierarchy. If, in this controversy, any personal axes are being ground, it seems more reasonable that the grindstone is operated by the ruling dynasty, rather than by this entirely aloof observer. 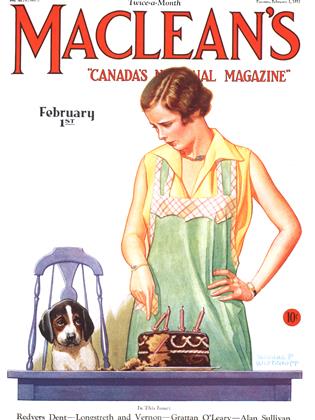