Usually out of Reach—Maybe if unemployment would reach out and get some of the executives, conditions would pick up.—Toronto Star Weekly.

The Way It Seems—It is estimated that if all the cars in Canada could be arranged in one long line, the one at the back would be mine.—London Free Press.

Why Resorts Exist—You can tell the natives at a popular resort. They are the ones who wish they had money enough to go somewhere else.—Sault Ste. Marie Star.

Scientific Note—If Adam had been a wireless operator and had sent out an S O S, it would not have reached the nearest globular cluster of stars yet.— Prince Rupert News.

Better Than Nothing—One advantage in getting an education by reading fifteen minutes a day is that you can be a wonder to people who read ten minutes. - Belleville Intelligencer.

Philosophy A lot of us are actually happier in disaster. When the sun shines we expect a storm to follow. When it storms we look forward to future sunshine.Fernie Free Press.

Scanty—Our bet is that if all kitchen aprons in the hope chests of this year’s June brides were laid end to end they wouldn’t reach from the door to the breakfast room. - Galt Reporter.

Dime Novels—A local writer wants to know’ what has become of all the old-time dime novels.

Why, they’re running as serials in the “Wood Pulps.’’—London Free Press.

Never Again A New York woman recently delivered a speech which lasted for three hours. Her husband vowed he would never drop cigarette ash on the drawing-room carpet again.—Vancouver Province.

Useful Suckers—Never poke fun at suckers. Look how the world suffers when they hibernate.—Galt Reporter.

Logical—You may have heard this one, but a Scotsman with a glass eye once tried to get into a theatre for half price.—Regina Leader-Post.

Plowing Time—But why pile up money in saving banks? Locking the horse in the stable isn’t the sure way to get plowing done.—Chatham News.

Brake Versus Break—The new brake that can stop a seventy-mile-an-hour car in twenty feet is almost as good as a telephone pole.—Toronto Globe.

Interesting Experiment—We quit trying to understand the fine points of economics as soon as we found out that having too much gold would bring on hard times.—Judge (N.Y.)

Working Overtime-Hon. Arthur Meighen believes the six-hour day is likely to arrive, but he did not add that his own success had been based on that schedule.

Alibi—A Calgary man says he always strolls in the front yard in plain view while his wife is practising her singing lessons, so the neighbors will know he is not beating her.—Toronto Mail and Empire.

Such People! — Is anything more annoying than to spend the Christmas week-end at an expensive hotel and find friends there who are pretending they can afford it too? — Quebec ChronicleTelegram.

Using the Machinery—It’s too late to worry about yesterday and too soon to worry about tomorrow, but this does not mean that one shouldn’t think. It’s mental aptitude that counts, rather than mental capacity.—Saint John TimesGlobe. 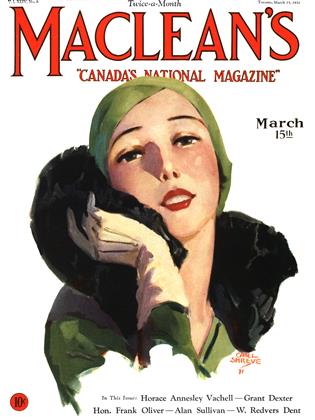