The Lure of the Canadian Spring JOHN NELSON May 1 1931

SPRING is essentially of the country. It eludes the city dweller, surrounded as he is by so many of its counterfeits. He is misled

by the brimming gutter which bespeaks not the effects of solar heat, but of steam plants. These local and man-made signs of spring are the artificial tokens of a change which has not yet reached the deep hollows of the woods and which still lurks along snow-bound streams. The calendar is an unreliable guide to those doomed to tread the city’s concrete trails—the cliff dwellers in the steel and stone canyons of the modern metropolis. Feathered messengers bring no tidings of shoot and bud to pavement and curb. No self-respecting robin would nest there. She has already found a home for her young family on a familiar sun-bathed hillside. No gorgeous oriole will expose her brilliant breast or trill her note of happiness in its noisy and barren waste. The little brown wren knows that she will find no fresh brush bleeding from the woodman’s axe in such a leafless place. For assurance we must turn, like the birds, to the woods where spring may still be hiding but where at least we can catch the flutter of her gown.

Fortunately the wood lots have not, as yet, been pushed so far back from the realm of street cars and bright lights, that they cannot be readily reached from almost any Canadian centre. And during the weeks of the year’s transition, there is a steady migration thither of those who know by an unerring boyhood instinct just where and when the first hepatica will thrust its modest head from its sheltered nook on the southern side of an upturned tree. These middle-aged city folk who throng the open glades are not really looking for May flowers. They are seeking the recapture of childhood—of one of the great adventures of a day when both they and the year were still young. Every leaf-filled hollow holds

that old hope; every sunny slope that old expectation. Somehow in that search the years slip from bent shoulders and the simple joys of a far-off time steal back to the spirit. It is, to be sure, but an echo, faint and far, of a vanished ecstasy, but for it thousands yearly make this wistful pilgrimage as to a shrine.

Once in the woods, the progress of spring can be accurately fixed by the bloom stage of the bloodroot, the dogtooth violet, the dainty little spring beauties, and the whole lovely family of the wildwood. The very resiliency of the leaf mold with its grateful earthy perfume marks the stage of the season. There is a new voice in the woods—sometimes jast “a whisper down the field”—and again the faint gurgle of hidden waters escaping from beneath the ice as though spring were chuckling behind her mask in elfish delight with the loveliness she is about to disclose. The fresh scar on the sugar maple quickly proves that “sap’s running.” One learns by these and many other signs that the long winter bivouac is broken and that the green armies are again on the march.

And if one knows his Canada he may fix with fair certainty just how the spring is coming to all its scattered parts. On a thousand river banks his fancy can picture delighted groups watching the great shove of broken floes as the ice at last “goes out.” On scores of streams the hardy river-drivers, peavies in hand, are leaping from log to log to release the timbers jammed in the narrow passes of the waters. He knows that farm boys no longer go to the creek, axe in hand, to water the stock, but that in every depression the cattle are quenching their thirst from the melting snows and lingering about old straw stacks in the pleasant warmth of mid-day. He knows that all along the Great Divide dog harness is being greased and stored for another winter, snowshoes oiled and mended, and that fresh-pitched canoes are already basking on banks to which the reluctant ice still clings. In the middle west the whole air is again fragrant with the odor of the freshly upturned loam and the sweat of steaming horses, and the tenacious gumbo is losing its grip upon wheel and ploughshare. In the mountains the hands of chubby station children are plucking the dainty yellow posies which bloom at the melting foot of the winter avalanche and are offering them to travellers at the windows of passing trains. Far out by the western sea they are bearing home armfuls of the glorious lilies which clothe Vancouver Island at Eastertide, and derive their name from that festival. Down by the Atlantic the delicate hepatica is yielding its fragrant tribute to still another generation of young Canadians. And over all there is a flush on shrub and tree too misty and intangible to analyze but rich in the promise of the glory of the opening year.

There are signs, too, that are not of the woods. There is a great stir about the quays and wharves as the big liners prepare once more to cast off the hawsers and ice that held them through the long winter, and make ready for the reopening of navigation. This is echoed in the moorings of the yachting fleet, where young backs are bending over rusty and recalcitrant engines and young and grimy hands are plying paint brushes on cabin and hull. The shout of “play ball” comes again from back lots; the click of marbles is again heard amid the clamor of childish voices; the bag of clubs is again under critical survey, and creels and flies are once more in preparation for their annual visit to beloved pools.

For somehow spring really marks the New Year in Canada. It typifies Canada as does no other season. Her emblem, the maple leaf, is generally pictured in the crimson glory which clothes it at the death of the year. But it is the spring, and all the sights and sounds of it, that really suggests her hidden and abounding life and wealth and the promise and beauty of Canada.

And these cannot be found save in the forest glades. It was here that Canada’s national life began. It is here her youth is perennially renewed. 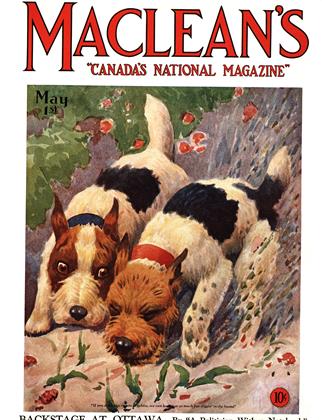