LUCY HILLIARD entered the building of The Moose Lake Lumber Company, nodded pleasantly to the half dozen clerks, and entered her private office. She was an attractive woman in her early thirties whose trim business suit proclaimed acquaintance with shops far superior to those of a British Columbia lumbering town.

Old Joe Mack, who had been her mentor in the same office fifteen years previously and now did office-boy work, was placing wild flowers in a vase on her desk.

“They’s a letter in that pile that’ll mebbe interest you, Lucy,” he said, jerking a gnarled old thumb at a wire basket. “Writer’s name is on the envelope.” “Thanks, Joe. How’s the rheumatism?” “Tol’able; jes’ tol’able.”

“If you feel in need of a rest, Joe, it’s all right to take all the time off that you want. Your salary will go on just the same.” “Thankee, Lucy; that’s very kind.” He hobbled out and Lucy glanced at her letters.

Department of Forestry; that would contain the new lease for a thousandacre tract. Prairie Lumber Company; there ought to be a good-sized order in that one. Letters from five other retail dealers. Business was certainly picking up. A handwritten envelope—ah; the one that Old Joe had referred to. From Michael Carmangay!

IUCY sat down in her leather-covered mahogany chair and fingered it reflectively. It was odd that Michael should be using cheap stationery which required him to scrawl his name and address on the upper left-hand corner.

Michael, though, had always been different from other men. How well she knew that! Since he had become one of the biggest executives in the lumber business some four or five years previously, naturally he could afford to be eccentric.

His first letter after fifteen years. Not addressed to her either, but to the company. Naturally, with big affairs on his mind, he would not know that she was still with the same old outfit. She smiled a little as she reflected that the company’s reply, signed by her, would probably give him a little jolt of surprise.

Suddenly lost in reflection of the things that once had been, Lucy gazed out the window which overlooked the mills.

This time she did not see the mile-long stacks of lumber that were piled along the lake front between the water and the railroad track, nor did she hear the high-pitched whine of the many cutting saws and smoothing planes that were turning rough logs into finished lumber.

She thought about Michael and that happy summer they had spent together.

HOW that name had thrilled her once! Michael Carmangay. She had loved the smooth syllables of it. No other name in the whole world had seemed half so attractive.

And she had loved Michael. How proud she had been when he, the handsome young bookkeeper with the curly hair and the winning smile, who could have had his pick of the town girls, had deigned to notice the insignificant filing clerk that she had been at the time. Seventeen she was then, and he twenty-five. A distant

and poor relation of the mill-owner who had been given a job out of pity after her dad was killed in a log jam— that had been her status.

Those long walks up the mountainside that overlooked the lake. Those canoe rides on the lake itself in the cool of the evening. When she had settled down to a serious career as a business woman she had put all that out of

her mind, but now it came flooding back with a burst of reminiscence that crowded out all thoughts of orders and payments and timber concessions. That never-to-beforgotten last evening! That significant moment when Michael, his voice curiously a-tremble in a way that made her heart pound because she thought she knew what he was going to propose, asked if she would care to stroll to their favorite lookout.

WE'VE been pretty good friends,” he had begun when they were seated under the big tree halfway up the mountainside. “Y-yes, Michael.”

“Could have a real serious talk, don’t you think?” “If—if you like.” She was trembling. She welcomed such a talk and yet, womanlike, she dreaded it, too. Michael had coughed in an embarrassed way. “Well, it’s like this, Lucy. I—I guess you know I’m no ordinary, unambitious bookkeeper, don’t you?” “Indeed I do, Michael.”

Michael had tossed his proud head so that the curly locks fell over his brow in the way she loved.

“Only two years ago I started on that timekeeping job in the company’s camp, and look at me now—swell position, with three boosts in salary. Going some, if you ask me. Not every fellow could rise the way I’ve risen.” “Indeed they couldn’t.”

“Lord, how I hated that job!” Michael went on, diverging from his main theme for a moment. “Thirty a month and rotten grub, hard and dirty bunk, no one to talk to but a lot of ignorant, roughneck lumberjacks.” Lucy had winced just a little, because her dear dead father had belonged in that category, but she had quickly choked down her slight feeling of resentment and a moment later had forgotten it.

“But I’ve shown ’em; I’ll say I have!” Michael continued with a burst of the boastfulness to which he was sometimes addicted. “At that, I’m just starting. Right to the top of the lumber business—that’s where I’m going, kiddo. No one can stop me. A man can become anything he likes in a free country.”

“You’re very clever, Michael.” Michael had pinched her arm. “Yeah, an’ you’re not so slow yourself. Quietlike but all there. I’ve been watching you and I know. Sometimes I think you’re almost as smart as I am.” Praise! From the one man in all the world whose

praise counted. How her foolish heart had pounded. But she had tried to be modest as she replied meekly: “Y-yes, Michael.”

A long pause that was tense with expectancy, then Michael had gulped nervously.

“Well, anyway, I’ve decided on something," he said. “I’ve made up my mind. This dinky little company, sitting here all by itself in a one-horse town, isn’t half big enough to hold me. So I’m quitting. I’m going away from here. I’ve been writing letters, an’ I’ve got a better job with a better company back East where I came from. Tomorrow I’m pulling my freight. We've had some good times together. I won’t forget ’em in a hurry guess you won’t either, eh? But everything has to end some time.”

Ended ! When she had foolishly imagined that it was only beginning. For a moment Lucy felt almost too weak to breathe. But she must not let him know never, never! She summoned her strength to reply: “I—I wish you luck, Michael.” And that was that.

FIFTEEN years ago. Never a line had he written since, though he had promised. Gaily he had loved and gaily he had gone away, leaving behind him a girl so wretched that life seemed hardly worth living.

It was four years later when she first read Michael’s name in a trade paper. Promoted to sales manager, he was, after having established an enviable record as a salesman. Making good all right, just as he had boasted he would. Three years after that

she had read his name again—vicepresident of his company now, a big man in a big business.

Still later a gabby Eastern buyer had supplied other details, though she had not greatly desired to hear them. Michael’s career did not interest her any more; she had found other things to fill her life. A gay dog all right, the buyer said. But he wras a big man just the same, and he seemed to be growing bigger. Of course, you never could tell . . .

Lucy had listened to no more of it. Well, she wasn’t exactly a failure

herself. The owner-relation, when he died, had bequeathed to her a thousand dollars worth of stock. That had given her a real interest in the business; that and the fact that no other love affair had ever distracted her. After-office hours spent with Joe Mack learning every detail of the business in the mill and yards as well

as in the office; her emergency trip on the road and surprising success as a saleswoman; the pledging of her stock and salary in order to buy more stock before the post-war boom sent values kiting — sheer luck that; her eventual advancement to the position of sales manager and, after a few more years, her taking over of the general manager’s job.

AND now here was his letter. She fingered it, still without opening it. What did he want? The letter had been mailed at a small northern B. C. town, near which one of the company’s timber limits lay. What was he doing up there? Maybe he wanted to buy the company’s tract. Well, it would cost him real money. He would learn that The Moose Lake Lumber Company was not a one-saw outfit now as it had been when he did hateful and poorly-paid work as a timekeeper.

She opened Michael’s letter and

absorbed its brief message at a glance. “Oh, my goodness!” she gasped.

For a moment her lips quivered. Fifteen long years melted away. Her keen eyes were no longer businesslike but soft and melting, as they used to be when she had i clung to Michael's arm.

Then her maturity and solid sense ' asserted themselves. She was not a girl j now. She pushed a button and a stenographer appeared.

“Just a routine letter,” Lucy said, “but please see that it’s mailed at once.” Then she dictated:

“Mr. Michael Carmangay; Dear Sir: We are pleased to confirm your assertion that you once worked for us as a logging-camp timekeeper. We recommend you highly for a similar position elsewhere, and hope you will get the one for which you have applied.” 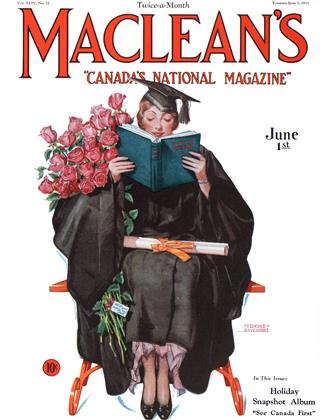