IT IS the smallest nations that have produced some of the world’s greatest men. And it has been reserved for one of Quebec’s smallest towns to produce a great industry —the Brome Lake Duck Farm. This is not only the largest duck farm in Canada, but the only one of its kind in the Dominion.

Founded in 1914 at Foster, Quebec, by Arthur Bates and A. W. Willey, and supported financially by the late J. E. Morin and Charles Langlois of Montreal, the plant was moved in 1917 to the southwest side of Brome Lake, near the village of Knowlton. Here, in a picturesque valley ringed round by Eastern Townships hills, a 150-acre farm was purchased and the enterprise was established on a more elaborate scale. Long, low, windowed, grey buildings were built for duck dormitories, and the land between

them fenced off into pens, each capable of holding 100 ducks, to serve as recreation grounds for these pampered waterfowl. A colony of other buildings—including the manager’s brick residence, the office where this senus loci directs the affairs of his miniature kingdom, and sheds for the incubators, food mixing, etc.—sprang up quickly as if some genii of the bottle had waved a magic wand.

The board of directors now includes such representative Montrealers as the Hon. John Hackett, G. B. Foster, Henri Langlois, Kenneth Dawes and J. Brown. The capital of the plant is approximately $75,000. Under the able supervision of its founder and acting manager, Arthur Bates, the industry has increased year by year, until last season 45.000 ducklings were raised and sold.

The suggestion of a duck farm in Canada was primarily scoffed at and discouraged as being impracticable, both on account of the rigors of our winters and because the initial cost of duck raising might make the price of the market product prohibitive to the general consumer. Today, visitors admire the spectacle of thousands of ivory-white domesticated aquatic beauties gliding with stately mien to the music of their weird chant, and thousands of Brome Lake ducklings are being shipped regularly during the season to Toronto, Sherbrooke. Montreal, Quebec, Ottawa, and other points in the

various provinces too numerous to mention.

But success in this business as in any other undertaking has not been attained without overcoming obstacles and instituting a systematized schedule for the duck family. Let us look at the other side of the shield. Let us follow the processes by which these successful results have been achieved.

npiIE incubators begin their mission toward the end of January and are kept filled until August. The first hatching takes place in February, when the golden "babies”

are allotted to nurseries holding from fifty to 100 each. During the first week or so they are fed four times a day. At the psychological moment they are transferred to the growing houses and fed three times daily, and then to their last habitat, the fattening sheds, where their meals, though richer, are restricted to two. Their rations consist of a mixture of flour, corn, shorts, bran; and 25.000 ducks consume on an average five tons of this mixture a day. When the ducklings are eleven weeks old their luxurious life ends. In order to attain the best results they are dry-plucked, cooled in ice-cold water, labelled, loaded on the delivering truck, motored stationward and shipped to various more or less distant points where Brome Lake Roast Duckling will presently form the pièce de résistance at Ritz. Chateau Laurier, and Royal York dinners.

That is the formula. But a great deal of perseverance and common sense is required to make it work out right. Duck breeders in other localities have been obliged to forego their ventures because of devastating insects and other foes to duck culture. But Mr. Bates seems to have steered clear of all such insidious enemies. He is devoted to his lifework and has great faith in its future, anticipating the time when his prodigies will cover far more than the thirty odd acres of land they now occupy.

Owing to climatic conditions the duck

season is restricted to seven months, during which time fifteen employees are kept on the qui vive. Their duties consist .not only of seeing that the watering troughs and smaller receptacles are filled with fresh water brought down from hillside springs in pipes and of distributing the daily regimen of food, neither too much nor too little to satisfy without surfeiting—for the art of raising ducks, Mr. Bates affirms, lies largely in the art of feeding—but in dry-plucking the birds for market. They are allowed nine cents apiece for doing this, and so proficient do some of the workers become that they handle seventy-five in one day. By November, the last shipment has been dispatched, and the working staff is reduced. Those remaining busy themselves with taking down wires, ploughing up the recreation grounds, preparing for next season’s activities and taking care of the breeders. The latest improvement is a cement watering trough which has been laid across the meadow, so that when the ducks are turned out next spring to gather their own salad they can quaff running spring water.

rT*HERE are at present no other duck farms in Canada from which to procure new strains to maintain the high standard of the flock by cross-breeding. So the incumbent breeders—if one may speak of those now carrying on in that way—were brought from Boston in September, 1,100 strong. Quacking vociferously, they were

motored in relays to their new home, where they soon became acclimatized. They scuttle in and out of their little doors continually, flapping their abbreviated wings, elongating their long necks and uttering their age-old cries. This vocal concert can be heard at a considerable distance, and creates an eerie effect during winter blizzards when passersby cannot see the white choristers.

Mr. Bates prefers the White Pekin duck because it is the most succulent for table

purposes and is also a prolific layer. Whereas the average farm duck lays about forty eggs a year, the White Pekin has a record for upwards of 100. And, since the ducks are grain-fed, these eggs are as delectable as hens’ eggs, and would be in great demand were it not more profitable to keep them for the incubator. Apropos of wild ducks, a strange coincidence occurred one year when a black Mallard flew in from the open spaces and voluntarily embraced captivity in order to attend the duck Chautauqua.

Quite apart from its business and financial side, this industry affords amusement and gives pleasure to men, women and children in all walks of life. During the summer months, hardly a day passes without its quota of motors turning off the main highway for a nearer glimpse of these fascinating creatures. One invariably sees in everything what one is constituted to see. A man with war experience behind him looks at 25,000 odd ducks weaving in and out within the wired enclosures before their dormitories and immediately likens them to an army executing military manoeuvres, in regiments and platoons, on the parade ground before their barracks. An artist sees their moving white ranks across green meadows as crests of sea waves breaking against rocks. To the fanciful movie fan they are dancers performing classic ballets. To children they are a little bit of fairyland come true.

Near the duck farm a creek drowses lakeward between tawny, tall grasses. Experience has proved that it is better to keep ducks away from water, where they are apt to swim beyond bounds or exercise too strenuously to acquire the desired avoirdupois. Before this was ascertained, however, the ducks were permitted to do the

duck-step down the path through the pines to the creek. Such numbers paddling about made a pretty picture. One afternoon they were rather late returning." A fire of brush and whatnot was burning brightly at the edge of the woods, casting fitful pencillings among the sombre evergreens. As the white procession wended up through the darkening trees, it looked like a band of pilgrims bound for some shrine.

Not pilgrims, but pioneers. 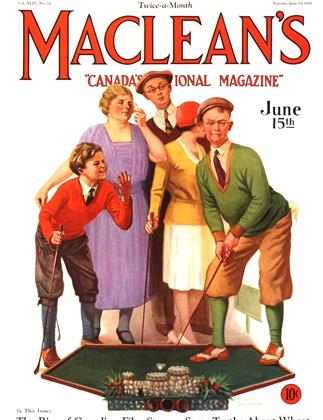