THE SWING OF THE POLITICAL PENDULUM VICTOR LAURISTON July 15 1931

Can the Conservative party prevent history repeating itself? Its odd, but ever since Confederation when a party has been in at Ottawa it has slipped in the Provinces

It’s safe to say that every time the patient old taxpayer heaved his shoulders, tossed the old political burden into the discard and took on a new one of different complexion, the discards were profoundly surprised. To them, what had happened was inexplicable.

And—whisper it not in Gath—on more than one occasion the surprise at the outcome of a political contest in Canada hasn’t been limited to the losers. It has been shared, and mightily, by the winners.

In the day of political downfall, to tell the losers that their mishap was not fortuitous but governed by immutable law, is about as comforting as it is for a government to tell the man out of a job that unemployment is a world-wide condition. Yet, in Canada at least, the immutable law is there.

It works like the swing of a pendulum, like the upsand-downs of a seesaw, and the result is a curious sort of automatic balance between the Canadian political parties.

It is possibly a heritage from the Mother of Parliaments. The United Kingdom maintains its political balance by allowing each party a spell of power, but permitting none to retain it overlong. It’s rare in the Old Country for the same party to hold power through two successive parliaments. Stanley Baldwin comes in on the crest of a wave of enthusiasm, offends a lot of people by doing what he thinks right, and is tossed into outer darkness. Ramsay MacDonald succeeds him with a cargo of glowing hopes, attempts to work out his theories or decides that they are unworkable and—well, let the next year or two finish the sentence.

In Canada the principle of automatic balance had to adapt itself to decidedly different conditions. Our Dominion, having less population than the British Isles, makes up the deficiency by creating a greater number and variety of governments. In particular, not merely a Federal Government at Ottawa, but nine provincial governments—all ten of them promising, spending and taxing.

Now and then the remark has been made that Canada is overgoverned.

But out of this dual federal-provincial system has developed Canada’s automatic political balance which through sixty-four changing years has worked with a precision that an engineer might envy.

DESPITE agrarian uprisings such as the Patrons of Industry in the 90’s and the United Farmers and Progressives of a later day, the political history of Canada since Confederation has been the history of two great parties. The membership of one party ranges from extremely high-tariff and prerogative Tories to public ownership and moderate-tariff Conservatives; while the other varies from mild and halting Liberals who see the necessity of protection to radical Grit free-traders who hate the institution worse than poison.

Shrewd old Sir John Macdonald realized this. At Confederation he w'orked the no-party cry. From the preConfederation coalition the Government had carried over a few of the more pallid Grits; so, argued Sir John, it was still a coalition. “Like that of the wolf and the lamb," commented his opponents.

Simultaneously with the first Federal Government under Confederation there came into existence four provincial governments. They, too, were “no party” and “coalition.” Hon. John Sandfield Macdonald, erstwhile a Liberal, was Ontario’s premier; and though the Quebec government was predominantly ‘Bleu,” not to say “Castor,” the governments in Nova Scotia and New Brunswick were politically colorless. All had this in common, though, they were tacitly allied with the party predominant at Ottawa.

Right then the pendulum began to swing.

The Blanchard government in Nova Scotia lasted just about long enough to go to the polls.

In four short years, half of Confederation, so far as provincial administration was concerned, had broken away from its allegiance to Sir John. In fact, the provinces showed an unmistakable tendency to line up in snarly political opposition to the Federal Government. From the outworks thus captured, the Grits turned their guns of provincial organization and provincial patronage on the Federal citadel.

The Pacific Scandal was merely an incidental explosion that precipitated the collapse of a Federal fortress already badly undermined.

A good many Grits in 1874 saw the political horizon rosy red. Entrenched at Ottawa, it would surely be easy to capture the remaining provincial outposts.

Far from it. During the Alexander Mackenzie régime from 1873 to 1878 the Grits gained no real ground provincially. The Letellier coup in Quebec did indeed give them a precarious hold on that province, but there was no real shifting of strength in their direction. In Nova Scotia— anti-Confederationist though the province was—the provincial Grits lost ground. Their government collapsed almost simultaneously with the Mackenzie Government at Ottawa.

TF A thing happens once, it’s an accident. If it occurs L again, it’s a coincidence. If it goes on happening, however, more than the words “accident” and "coincidence” are required to explain it.

In the eighteen long and, for the Grits, weary years of Conservative rule at Ottawa from 1878 to 1896, the drift of the provinces was steadily toward the Liberals.

The provincial Conservatives didn't expect the pendulum to swing that way. Nor did the Federal Conservatives. And for a few brief moons the pendulum itself didn’t expect oi intend to swing. A Conservative government achieved power in Nova Scotia late m 1878. Early in 1879, Sir Henri Joly, with his fiat government and its precarious majority of one, was snuffed out in Quebec. Hon. Louis H. Davies went out in Prince Edward Island. Was there any reason

why this, from the Conservative viewpoint, glorious state of things couldn’t and wouldn’t continue for all time?

For eighteen long years the Grits made vain assaults on the Federal citadel. At times they had old Sir John guessing, but he could always outguess them.

Meanwhile, the utmost Conservative efforts backed by all the energies and all the influence of the Ottawa Government, were powerless to shake the hold of Mowat on Ontario The sole Conservative gain, once the pendulum commenced to swing Gritward. was in Quebec, where in 1891 Lieutenant-Governor Angers dismissed Mercier.

In 1896 Laurier came into power at Ottawa. In 1897 the swing toward Liberalism reached its farthest point when Quebecreturned to its Grit allegiance. At Confederation, Canada had possessed not one Liberal government. Thirty years later there was not one “straight Conservative’’ administration.

Yet within two years the pendulum began to swing back. Once more the automatic balance worked. In 1899 Hon. Hugh John Macdonald defeated Greenway in Manitoba : in 1903 Hon. Richard McBride established the first party—yes. Conservative party— administration in British Columbia; in 1905 Sir James Whitney won Ontario; and in 1908 Sir J. D. Hazen captured New Brunswick. The winning of the provincial outposts had pretty well undermined the central citadel when Reciprocity put Laurier out in 1911.

A few weeks after that Federal debacle, Prince Edward Island lined up with Conservatism. And there, characteristically, the swing of the pendulum halted.

True, in the early days of the Borden régime the Conservatives made practically clean sweeps in three provinces— British Columbia, where the opposition was reduced to two Socialists; New Brunswick, where only two Liberals secured seats in the legislature; and Manitoba, where politics were similarly lopsided. Ontario was overwhelmingly Conservative. The traditional doornail looked no more like a corpse than did Liberalism in these four provinces.

against political monotony and monopoly got in its deadliest work. In 1915 Hon T. C. Norris headed a Liberal administration in Manitoba; in 1916 Hon. H. C. Brewster ousted the Conservatives in British Columbia; in 1917 the New Brunswick Tories went down before Hon. W. E. Foster ; and in 1919 the U. F. O. wave in Ontario engulfed Sir William Hearst. Provincial Conservative oppositions, no matter how anxious the Federal forces were to help them, were unable to shake the Liberal governments in Nova Scotia, Quebec and Saskatchewan. The only defection from Liberalism was in Alberta, where, under the U. F. A., the province went even more strongly anti-Conservative.

When Hon. W. L. Mackenzie King formed his first administration in 1921, there was not a Conservative administration from ocean to ocean. Indeed, a lot of Tory pessimists and Grit optimists solemnly pronounced the Conservative party dead, and seriously predicted that the fight of the future lay between moderate Liberals and extreme agrarians.

Does it not look as though there was something immutable as taxes and the grave about this swing of the political pendulum?

Why the Pendulum Swings

There are several whys. Also one or two wherefores. Hereunto subscribed are some of these whys and wherefores.

Hon. R. B. Bennett in his cabinet-making has, so far, lured Hon. E. N. Rhodes back from Nova Scotia and Hon. Arthur Sauvé from Quebec and has effectually removed Hon. G. H. Ferguson from the province of which he was a sort of uncrowned king.

On the other hand, the provincial field attracts strong men from the ranks of a Federal opposition. Better the modest emoluments and lesser glory of a provincial premiership than the dark shades and meagre rewards of opposition at Ottawa.

Hon. Hugh John Macdonald in 1899 left the Federal for the Manitoba provincial field; Sir Douglas Hazen, who had been a Federal member, became provincial leader and later premier in New Brunswick; Hon. S. F. Tolmie graduated from Federal opposition at Ottawa to the premier’s chair at Victoria; Hon. E. N. Rhodes of Nova Scotia and Hon. J. B. M. Baxter both left Federal affairs to win provincial premierships. And a semi-accomplished transit at the present moment is that of “Mitch” Hepburn from Ottawa to Queen’s Park.

The Federal government, too, is richer in appointive powers. The outstanding instance, out of many, was the transfer of Sir William Meredith in 1895 from the Ontario opposition leadership to the Supreme Court, a move that probably delayed by some years the overthrow of the Liberals at Toronto.

There is, too, a certain amount of perhaps inevitable friction between Federal and provincial authority. If it isn’t real, it can at least be imagined; and for political purposes imaginary encroachments by Ottawa on provincial rights are just as efficient and effective as real ones, so far as concerns the opposing provincial party. Sir Oliver Mowat made skilful use of the Ontario-Manitoba boundary dispute. Probably every provincial partizan in Nova Scotia has to a greater or less extent played on the antiCon federation feeling which is a legacy from Hon. Joseph Howe. And when the fellow lurking outside the humble provincial cottage is a dyed-in-the-wool burglar with designs on the plated ware and grandfather’s gold watch, who would for a moment think of selecting as a watchdog some canine that had romped with the burglar when he was a boy?

The pendulum swings. Out of its swinging comes, in the long run, a fair chance for men of all political stripes and colors to serve their country. That is good. The fault— the endless intergovernmental jangling, the expensive intergovernmental litigation, the costly duplication of governmental activities in the effort to win popular support—these time-wasting and dollar-wasting items are due, not to the pendulum itself, but the principle of duality in administration which brought the pendulum into existence. 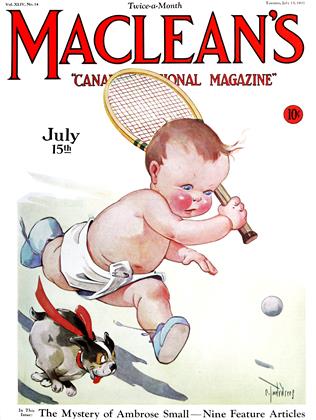