Director of The Chatelaine Institute

IN SEPTEMBER Nature makes a supreme effort to prove her generosity. As evidence she offers the products of garden, orchard and vineyard, and surely no doubts could survive in the face of such profusion. Our markets at this season are a joy to the housekeeper, for in the colorful array of delicious foods she finds fresh inspiration for meal planning.

There is indeed no excuse for monotony in September menus. Many fruits and vegetables are now at their best, and fortunately at their cheapest. Moreover, the majority lend themselves to various methods of preparation and combine well with other foods in any number of interesting dishes. Vegetables are so generally popular and possess such pronounced dietary merit that no day’s menu would be complete without at least two varieties. They are the ideal accompaniment to meat and fish, but their menu possibilities are by no means limited to this use. A vegetable plate of three or four varieties is an attractive main course; a casserole of vegetables, with perhaps some left-over meat, eggs or cheese, makes an economical and well balanced luncheon dish; while a salad of raw or cooked vegetables fits into almost any meal.

Of course, the vegetable dinner depends for success upon a choice of vegetables harmonizing in flavor and contrasting in texture. Do not forget the importance of color when making such groupings, as an artistic appearance adds so much to the appetite appeal. Many palatable combinations suggest themselves, and if these points are kept in mind there is no fear that the vegetable plate or the salad will lack distinction.

rT'HE particular value of vegetables lies in the vitamins and minerals which they provide, and for this reason their proper cooking is of the utmost importance. The old method of covering with water and boiling for long periods was wasteful of the food values and destructive of color and flavor. Nqwadays we cook all vegetables for a much shorter

time, usually in a minimum of water. Or we steam or bake them to preserve as much as possible of the original “good-

Boiling is used for most varieties and is a satisfactory method when care is taken. It is generally advisable to add only a small quantity of water, but an exception to this rule is made in the case of strong flavored vegetables such as cabbage, turnips, onions, and others of this class. It is best to have the water boiling when the vegetables are put into it; then bring quickly to the boil again and keep at that temperature until the food is tender, not soft. Salt is added to the water, in the proportion of one quarter of a teaspoonful to a cup.

Short, quick cooking of all vegetables reduces food losses and results in more delicate flavor and the preservation of color. Overcooking is to be avoided in all cases, as the texture, appearance and taste are impaired and the product thus made less appetizing.

Steaming is a method which has much to recommend it. A somewhat longer time is required, but there is little damage to the nutrients contained in the vegetable and the appearance is generally attractive. Baking is excellent for all varieties containing a high proportion of water. By this method, all the food value is retained and a fine flavor developed. Certain vegetables are broiled or fried, and those cooked in this way offer another opportunity to add variety and interest to September menus.

"X Æ ANY of these garden products are delicious when prepared by any one of a number of ways. Tomatoes, for instance, may be served not only raw, but broiled, baked, stewed, in scalloped dishes, or as an ingredient of sauces and soups. They may also be preserved for future use, as canned tomatoes, chili sauce or catsup. Their juice, either fresh or canned, makes the delicious tomato cocktail which has achieved such popularity.

Corn is another fall vegetable which is a general favorite. It is perhaps best liked when eaten from the cob, but the kernels may be cut from the ear and used in many recipes. Cooking too long is a common mistake in preparing fresh corn. Young, tender ears require only six to ten minutes, though the time should be increased slightly for maturer com. It is at its finest when freshly gathered, as it loses

Potatoes are cooked by different methods and served in an endless variety of ways; while turnips, carrots, beets, squash, cabbage and parsnips are among the well-known varieties which have an established place in the diet. Less familiar products are introduced occasionally to give further variation to the menu. Examples of these are kohl rabi, salsify, egg plant and others in season at this

Orchards as well as gardens give of their bounty in September. Canadian apples well deserve their high reputation, and their uses are limited only by imagination and ingenuity of the housekeeper.

ingenuity of the housekeeper. They are supreme when served raw, alone or combined with other foods, for salads, fruit cocktails, and desserts. When cooked, their tartness makes them a delightful accompaniment to meat and an important ingredient in many dishes.

Peaches, plums, pears are others which bring deliciousness to autumn menus. Grapes are here in abundance. They may be the dessert or an ingredient of it. They lend color and tartness to the salad and are an excellent addition to fruit compotes. Their juice is the basis of many delicious beverages and may be bottled for use at other times. Jams, jellies and many relishes are made from grapes, and their characteristic piquancy makes them almost univerally liked.

Combine the corn and the chicken. Add the mushrooms, chopped onion, celery and pimento to the butter, and cook until browned. Add the corn and chicken mixture, the browned vegetables and the seasonings to the white sauce, and turn into a deep baking dish. Make biscuit crust as follows:

2 Cupfuls of flour 4 Teaspoonfuls of baking

4 Tablespoonfuls of About % cupful of milk

Sift together the flour, baking powder and salt, and cut in the shortening. Add the liquid gradually to form a soft dough. When mixed, drop by tablespoonfuls on to the mixture in the baking dish and bake for thirty minutes in a moderate oven—350 degrees Fahr. Eight servings.

6 Tomatoes or other fat

I Peel and slice the egg plant and plunge into cold salted water. Peel and slice the onions and slice the green pepper. Dry the egg plant and place with the onions and pepper in a frying pan in which the butter has been melted. Cook until browned. Place a layer of the browned vegetables in a greased casserole, season, cover with a layer of sliced tomatoes. Add another layer of the vegetables, cover with tomatoes and continue until the dish is filled, seasoning each layer with salt and pepper. Cover with buttered crumbs and bake in a moderate oven, 375 degrees Fahr., for forty-five minutes. Six servings.

Bake the scrubbed potatoes in a hot oven —425 degrees Fahr.—until soft. Cut in halves lengthwise and scoop out the insides. Mash thoroughly and add the milk, butter, seasoning and nuts. Whip until fluffy and repack in the skins. Place a marshmallow on each, return to the oven at 350 degrees Fahr., and brown. Six servings.

1 Tablespoonful of sugar Dash of paprika

Melt the butter, add the onion and cook until brown. Add the turnip, seasonings and sugar and combine thoroughly. Add the beaten egg yolks and fold in the stiffly beaten egg whites. Turn into a greased I casserole and bake at 375 degrees Fahr, for twenty minutes. Eight servings.

Salt, pepper and a dash of paprika Yi Cupful of tomato soup or thick tomato sauce

Peel the cucumbers and cut in halves lengthwise. Scoop out the centres, dice and mix with all the other ingredients except the stock. Fill the cavities with the mixture and place the halves close together in a baking pan. Pour the stock around and bake at 350 degrees Fahr, for half an hour, basting with the stock occasionally. Serves

Cut squash in half crosswise, remove seeds and stringy portion, and place, cut side down, on a rack in a pan with the hot water. Bake at 400 degrees Fahr, until the squash is tender—about two hours—replenishing the water if necessary. When baked, turn right side up, sprinkle with salt and pepper and dot with butter. Increase oven heat to 500 degrees Fahr, and allow the squash to brown for ten minutes; or the pulp may be scraped from the shell, mashed, seasoned and butter added and served hot in a vegetable dish.

Sometimes squasli is cut in pieces suitable for serving, each piece dotted with butter and sprinkled with salt and pepp' and

baked at 375 degrees Fahr, for forty-five to sixty minutes. This reduces the time of baking, and the squash is served in the shell.

Cut the marrow in one-inch slices, remove the skin and cut into pieces for serving. Place in parchment paper or cheese cloth on a plate, and steam until tender—about twenty to twenty-five minutes. Lift out carefully, add seasonings and butter, and serve. The marrow may be mashed and served with added butter and seasonings, or a cream sauce made from the water collected during the steaming may be poured over the pieces.

2 Cupfuls of peach pulp and juice

Select ripe peaches, peel, crush and add the sugar and lemon juice. Allow to stand for an hour or so, then force through a sieve or ricer. Combine the whipped cream with the beaten egg whites and fold in the peach mixture. Pack in a covered mold and surround with four parts of crushed ice to one part of salt, and freeze for about three hours. This may also be frozen in the trav of a mechanical refrigerator. Eight servings.

Y Teaspoonful of cream of tartar Pinch of salt

Wash, halve and seed the plums and place in a casserole with the sugar and water. Sprinkle with the tapioca and bake for twenty-five minutes at 350 degrees Fahr. Beat the egg yolks until light and creamy and add the sugar. Beat the egg whites, add the -salt and cream of tartar and beat until the mixture holds its shape but is not dry. Fold in the egg yolks, then the sifted flour gradually. Stir the plum mixture well and pour the batter over it. Bake at 325 degrees Fahr, for twenty-five minutes to bake the batter. Serve hot or chilled with plain or whipped cream. Eight servings.

1 Package of orange or lemon jelly

Pour the boiling water over the jelly powder and stir until dissolved. Allow to cool. Dice the apple, halve and seed the grapes, peel and dice the peach and the pear. Fill sherbet glasses half full of the mixed fruits and pour over the cooled jelly mixture until the glass is two-thirds full. Allow to chill until firm, top with whipped cream and garnish with halved grapes. Serves six.

Pare the apples, cut in halves crosswise and remove the cores. Make a syrup of the sugar and water and cook the apples carefully until tender. Drain and place each half on a round of sponge cake which has been spread lightly with jelly. Add onehalf cupful to the syrup, cook until thick and pour over the apples and cake. Garnish with whipped cream and cherries. Serves six. 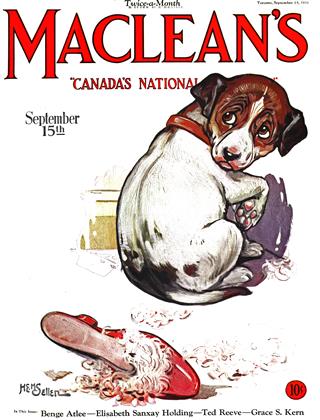