Answer—Earnings reported by Canadian Hydro-Electric Company for the first six months of 1931 showed that the full year’s dividend on the preferred stock was earned in the first half of the year but the amount available for dividends in the second quarter of the year was less than in the first quarter.

The earnings of C. P. R. have declined steadily all this year and immediate prospects of improvement are not very evident. If the present decline in earnings continues indefinitely, the company may not be able to continue paying its dividends until conditions improve.

Canadian National Railway bonds, guaranteed by the Dominion Government, are quite safe as to interest payments. The price, however, has been affected by the drop in the value of the Canadian dollar and is likely to fluctuate as the dollar fluctuates.

Question—Can you give me any information as to the earnings of Cities Service Corporation in 1931?—L.. Ontario.

Answer—Net earnings of Cities Service Company applicable to the common stock and reserves before depreciation for the twelve months ending July 31, 1931,

amounted to approximately $31.300,(XX) compared with $48,600,000 for the previous twelve months. These earnings are as reported by Financial Chronicle of New York.

Question—Please tell me through the columns of your magazine what is the position of Chilean bonds.Mrs. H.. Lethbridge, Alla.

Answer—According to a report in the New York papers, the Government of Chile declared a moratorium on its foreign obligations on July 15. but it was stated that the Government would deposit the amounts due with local banks in Chilean currency, thus preventing the depletion of its gold reserves. The new President of Chile who was recently elected by a large majority has publicly announced his intention of resuming payments of foreign obligations as soon as possible, but before this can take place there must be a fairly protracted period of internal reconstruction.

Chile has met its foreign obligations in the past better than most of the other South American republics, and it is generally believed that if the new government can effect the internal reconstruction necessary that the country will meet its obligations in due time.

Question -Please give me uhat information you can on Fraser Companies six per cent mortgage bonds due 1950. with interest payments in January and July. I am told that this company is having hard sledding. —P. B. K., Quebec.

Answer—According to press reports the interest on the above company’s six and a half per cent debentures was not paid on April 1, but interest on the bonds and notes was paid July 1. As you know, in the year

According to reports from Montreal, not official but from usually reliable sources, reorganization plans are now being considered and an amendment along these lines is expected shortly.

Question—To what extent, if any. are Majestic radios and refrigerators manufactured in Canada?—B L. S., Moncton, N.B.

Answer—Majestic radios are made entirely in Canada, including chassis, tubes, cabinet and speaker. The refrigerators are not made in Canada.

Question—I have read with interest the article on business and investments in Maclean s October 1 issue. This much condensed account is a summary of the type of information I have sought for some time in vain. As a comparative novice in the field of investments I ivould be pleased to have you recommend any publications such as lexis, periodicals, reviews, etc., from which I may gather the fundamentals of investment knowledge and a general knowledge of the methods used in the transaction of business in the market itself.—E. V. W.E., Quebec.

Answer—Most of the books which will give you the fundamentals of investment and a general knowledge of the methods used in the transaction of business on the stock market are rather expensive. The standard work on bonds is “Principles of Bond Investment,” by Chamberlain and Edwards, published by Henry Holt & Company, New York, price about $7. The “Stock Market” by Charles Amos Dice, published by A. W. Shaw and Company, j New York, is the standard work on this Í subject. There are very few elementary books.

As to publications, I would recommend the Financial Post, published by The MacLean Publishing Company, and the Northern Miner which deals exclusively with : mining and mines.

If you would write me a letter outlining some of the things you would like to know, 1 might be able to make it the basis of an article, or even of a series of articles. These suggestions are always welcome as I want to give the readers of Maclean s the sort of information they are looking for.

Question--/ wish to buy a sound Canadian common stock and have been considering j Canada Cement. I should be much obliged if you ivould let me have your opinion as to the j soundness of this stock. If you know of other investments promising a greater appreciation over a reasonable length of time, I should be glad to hear of them.—M. P., Quebec, P.Q.

Answer—The common stock of Canada Cement Company is not paying dividends at the present time and last year the company only earned thirty-three cents a share on its common. The company will doubtless be able to show better earnings when conditions improve, hut unless you are prepared to leave your money out without any interest for some time, I would not advise it as a purchase. A much more attractive common stock just now is Montreal Power. You must realize, however, that dividends on common stocks are by no means to be relied upon if conditions continue as they now are. and if this is important to you the safest investment is Canadian Government bonds.

Subscribers to Maclean's Magazine desiring advice in regard to Canadian industrial investments. or life insurance problems, will be answer, ed freely. Enquiries should be addressed to the Financial Editor of Maclean's Magazine and a stamped, addressed envelope enclosed.

If your enquiry concerns insurance, please give full details of your own financial and family position, so that definite and individual suggestions can lie given. 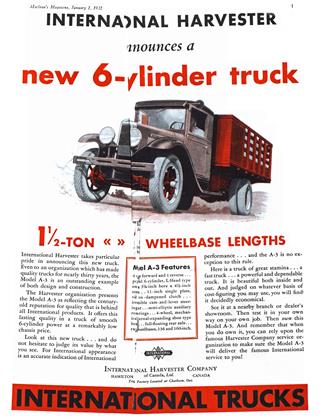