Hundreds of thousands of dollars are lost annually in Canada through careless Investment. Fraudulent and worthless securities are being constantly poured on to the market to trap the unwary. A general observance of this simple maxim will assist in the reduction and elimination of this economio waste—

THE stability of gold-mining stocks in the face of general declines in all classes of securities has gained for these investments the reputation of being practically depression proof. In some measure this tribute is justified. What gives it weight is the fundamental fact that gold mining is an industry that flourishes on economic adversity.

This may be somewhat surprising to the average investor who has been taught that all mining is a gamble and that gold mining in particular, because of the difficulty of delimiting the ore reserves of gold mines, is particularly speculative in character.

The element that lends additional security and profit to the gold mining stocks in a time of general business depression is that they, alone among business concerns, enjoy a fixed price for their product, while at the same time they are able to take advantage of declining commodity prices and wage levels to reduce their costs of operation and widen their margin of profit. When prices of commodities are high and labor is scarce, a condition exists that most people regard as prosperity. It is a period of considerable difficulty for the gold mines, which must continue to sell their production at the fixed price of $20.67 per ounce, but find their costs rising steadily. When commodity prices slip, wages decline and economic conditions generally are adverse, gold mining forges ahead. The present situation of economic distress has aided the gold mines in three distinct ways.

In the first place, their costs have declined with the lowered commodity prices and wages.

In the second place, the lowered costs have made available for profitable extraction large tonnages of comparatively low grade, or metallurgically difficult, ore that in ordinary times would not be profitable to mine.

In the third place, one of the concomitants of depression has been a widening of the premium on the New York dollar in Canada, and as gold sells at the rate of $20.67 per ounce in American funds, the mines have had the benefit of a premium on every ounce of gold produced that has ranged anywhere from one to twenty per cent.

'T'HUS, the factors that influence the -L prosperity of gold mines are just the reverse of those that work to bring prosperity to the base metal mines. In the period prior to 1930. Canada witnessed a tremendous advance in prospecting for. and the development of, lead, zinc and copper properties. Rising prices for all of these metals made many so-called marginal properties very promising, and this greatly stimulated the search for base metal mines. But base metal mines that could make a profit at 1929 metal prices were forced to suspend production as soon as prices toppled.

These new gold producers are making a valuable contribution to the alleviation of unemployment and are stimulating general business throughout the country by the purchase of equipment and supplies, but whether they are economically sound over a term of years can only be demonstrated in the march of time. Certain it is that if

general commodity and labor wages return to 1929 levels within the near future, the marginal producers of gold will face a position not unlike that of the small base metal producers at the present time—the larger and better established gold mines will suffer some diminution of profit and the feverish activity in prospecting for new mines will decline somewhat.

Of course, it is by no means assured that the general price level will come back to that of 1929. The leading economists of the world are sharply divided into two schools of thought on the question of what is likely to happen to the price level. There is one camp that includes those who believe that the way out of the depression will be found in various schemes of inflation, artificial or natural, which will restore the price level and bring equilibrium again into the economic structure. There is an equally large camp of economic students who hold that a new and permanently lower level of prices has been found after the long inflationary period of the last generation, and that it will be necessary for the world to adjust the level of debts, wages, government expenses, etc., to this new and lower level of prices. Should the latter prophecy come true, there seems to be little doubt that even the smaller marginal gold mining producers of Canada would be assured of prosperity for many years to come.

For a while some doubt was cast upon the future of the gold mines by a general world revulsion against the gold standard. The gloomy forecast was made by some economists that within ten years there would be no use for gold except for the manufacture of picture frames and false teeth. But these panicky views are tending to disappear as sounder counsels prevail and, since the world has found no working substitute for the international gold standard, it would seem that it is likely to remain with us for some time to come even if not for the lifetime of all persons now living. .

ONE factor that has become important in the costs of the gold mines in recent years is that of taxes. Since the gold mines have been earning good profits while most individuals and corporations have suffered a decline in earning power, the attention of statesmen has naturally been drawn to this profitable source of revenue. They have steadily increased taxes on the gold mines, and thus tended to put a damper on productive enterprise.

One factor that should not be lost sight of is that modem mining practice has kept pace with scientific development. Improved mining methods and lowered costs have made it possible for the mines to mill large quantities of low grade ore that formerly would have been unavailable as a source of dividends.

The theoretical value of a gold-mine share is the present worth of future dividends. That is. the annual yield on the stock must be sufficient not only to repay in time the interest on the capital invested but also to provide a sinking fund that will amortize the capital invested during the life of the mine. Since a gold mine is a somewhat

worthless asset after the metal has been exhausted, the investor must consider that cut of every dollar he receives in dividends a certain proportion is in reality a return of capital. The income tax authorities recognize this and permit the investor to deduct fifty per cent of his dividends from mining stocks from his total income when calculating the tax he has to pay.

For example, if the dividend from a gold mining stock yields ten per cent on the capital invested, and if six per cent of this is applied as interest and the balance of four per cent is reinvested annually in Government bonds or some other medium to assure six per cent income, at the end of 17 ]/¿ years the annual capital investment would be returned, plus six per cent in the interim.

It is unfortunate* however, that in Canadian gold mining such a yardstick for the measuring of a gold mining investment becomes practically unavailable, as no Canadian mine has measured positive ore reserves that can assure the continuance of operations for 17 U, years. Some of them will peter out in the next few years; some may continue to produce gold for two or three generations.

Some Canadian gold mines already have a long record of production. Hollinger Consolidated Mines, Canada’s oldest producing gold property, has been a producer for twenty-two years 'and a dividend payer for twenty. An investor in Hollinger shares at the price for which they were selling twenty years ago—SI6.10 per share—will have received by the end of 1932 about $53.75 in dividends upon his original investment. Had he invested the original capital in twenty year bonds he would have received in interest $35.50, allowing for reinvestment of proceeds at the same rate of interest as the coupons were cashed. He would today be receiving his original $16.10 back, while the investor in Hollinger would have today a stock with a market value thirty per cent higher than his original cost. In figuring this, allowance has been made for the four to one split of Hollinger in 1916. Had the investor been astute enough to sell his Hollinger at the peak market price, in the interim he would have received, in addition to his dividends, a profit of 570 per cent on his investment.

It is this speculative possibility, always present in gold mining or other mining shares—the promise if not the certainty of market appreciation—that influences most investors in gold stocks. Seldom are they purchased as sound investments to be held over a term of years. Because of the difficulty of estimating the life of any Canadian mine, no gold mining stock can be considered as a secure investment.

Much Depends on Management

CANADA is stepping ahead rapidly as a producer of gold. South Africa, at the present time, accounts for approximately fifty-two jier cent of the world’s gold output, as compared with Canada’s 12 x/2 per cent.

The United States was until 1930 the world’s second largest gold producer, but in that year it gave way to Canada. Nevertheless, the United States is still one of the only three countries in the world to produce in excess of 1,000,000 ounces of gold annually. Canada alone among the three main gold-producing countries in the world is increasing its production. In 1931 the gold output of Canada was valued at $52,750,000, which represented an increase of approximately thirty per cent over the previous year. In 1932 the gold production of Canada promises to be close to $63,000,000, according to estimates made by the present writer, or an increase of thirteen per cent above the production of last year. In all provinces from Quebec westward, gold mining is proceeding at an increased tempo, and the woods are filled with busy prospectors.

In the final analysis, however, the personnel of the management and board of directors is of the greatest significance. Responsible management takes its shareholders into its confidence regarding the position of the mine, and thus the share-

holders are better able to appraise the earnings trend of the company.

Most of the larger mining companies pursue the policy of building up large reserve funds which are used in whole or in part for the exploration of new properties.

There is great difference of opinion among shareholders on the question of the payment of mining dividends. Some investors would prefer to have all their profits paid out to them in the form of dividends in order that they may select their own future speculations or investments. 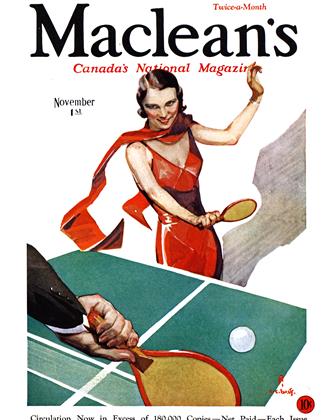