The Sound Position of Canadian Banks F. B. HOUSSER March 15 1932

Hundreds of thousands of dollars are lost annually In Canada through careless investment. Fraudulent and worthless securities are being constantly poured on to the market to trap the unwary. A general observance of this simple maxim will assist in the reduction and elimination of this economic waste—

IN VIEW of the fact that there were nearly 4,000 bank failures in the United States during the year 1931, the position of our Canadian banks,

as shown in their annual reports, should be particularly gratifying to Canadians.

One of the primary demands made upon banking institutions is that they shall maintain at all times a high degree of liquidity, or, to put it another way, a strong cash position. The banks aim to keep a ratio of quickly available assets to ; their public liabilities of somewhere around Í fifty (Ter cent. This, as may be imagined, j is not an easy thing to do at a time like the i present, when the market, even for high ! grade securities, is restricted. Under these j conditions, assets tend to become frozen or ! unsaleable. This has been the cause of ; most of the bank failures in the United I States during the past year. At times the i necessity for guarding against this conI dition makes the banks appear somewhat ruthless in their dealings with customers, and it is the cause of much of the criticism which one frequently hears levelled at them.

The annual statements of the nine Canadian banks, taken together, indicate that at the end of their 1931 fiscal year they had a ratio of quick assets to all public ! liabilities of 54.74 per cent, an eminently j satisfactory' position. The ratio of strictly I cash assets to all liabilities was 8.24 per cent.

Difference Between Quick and Cash Assets

By cash assets is understood actual cash on hand or immediately available if and when needed, such as coin, bullion. Dominion notes, bank notes, cheques, cur| renev, etc. It is this class of assets that constituted 8.24 per cent of the Canadian banks’ total liabilities, public and otherwise. at the end of their 1931 fiscal year. To be more specific, the total amount of liabilities to the public—shareholders and depositors—at the end of the fiscal year was S3,125.081.294. Of this amount, $379.205.018 were in cash assets and $1,536.396,354 in quick assets. It is doubtful if the banks of any other country today could make a more satisfactory showing.

The grand total of all the assets of the Canadian banks at the end of their fiscal vears was $3.125,088,440, compared with $3.288,063,744 in the previous year, a decrease of $162,975,304. It is interesting to note that this decrease is almost all accounted for by the reduction ¡ in liabilities to the public, most of which are made up of deposits, against which j there were heavy withdrawals in December j for the purpose of investing in the Canadian National Service Loan. The total decrease j in liabilities to the public other than share-1 holders was $162,374.082, of which $99,373,678 were in deposits, interest-bearing | and otherwise. The decrease in liabilities j to shareholders was $608,365. This latter j decrease, plus the decrease of $162,374,082 j in liabilities to the public other than sharej holders, gives a total reduction of $162,982,447, or just about equal to the decline of $162,975,304 in total assets.

TN GUARDING their assets in 1931, the -*• greatest problem faced by the banks was the drastic decline which took place in all classes of securities, but that portion of their statements dealing with their security holdings gives no indication of this loss. It is written off before showing profits, and does not appear in the statement at all. As loans I are paid off, the securities held as collateral against them are converted into cash which j is invested in other securities, so that the j volume of securities held is constantly j changing.

In the banks’ statements the securities j held are divided into “Government” and ! “other securities.” Holdings of Govern-1 ment securities, Dominion and Provincial, ¡ at the end of the fiscal year totalled $496,493,500, compared with $377,349,967 j in the previous year. This is an increase of : $119,143,533, which strongly indicates that! Government bonds were bought heavily in j 1931; not, it should be noted, that this increase represents a profit. The total value of the holdings of this class of security would have been considerably higher had it not been for the decline in the prices of Government bonds which occurred in the last two or three months of 1931.

The total amount of other securities— including Canadian municipal, British, foreign and colonial public securities, railway and other bonds, debentures and stocks —represented a value at the end of the 1931 fiscal year of $148,879,956, compared with $12 Í ,468,049, an increase of $27,411,907. It is important to note that these, as well as Government bonds, are shown at prices not exceeding market value. This class of holdings only amounts to twenty-five per cent of Government bonds. The banks’ example in this respect is a good one for the average investor to follow.

Most of the annual reports of the banks are for the year ending December 31, but not all. There are some whose year ends in October, others in November. The result is that the financial statements of the banks as a whole do not indicate what the position

was on December 31. In order to learn this, it is necessary to wait for the December report of the Dominion Bureau of Statistics at Ottawa, which is now available. This indicates a few changes from some of the figures just quoted.

It is not possible from the Bureau of Statistics report to work out the ratio of quick assets to total liabilities, as can be done from the financial statement. On December 31, however, total assets of $2,997,672,792 were reported, compared with $3,125,088,440 in the annual reports, a decrease of $127,415,648. This was offset by a decline of approximately $253,000,000 in deposits. The explanation undoubtedly is that these declines represent withdrawals of money from the banks for the $200,000,000 National Service Loan issued in December. Corporations and individuals who subscribed to that loan had to draw money out of the banks in order to purchase their bonds. This would lower deposits and cash.

When it is recalled that the current depression is to a very large extent a financial one, that stock market prices in 1931 dropped approximately thirty per cent, that bond prices had a very substantial decline, and that many people without jobs are living on capital which represents bank deposits to quite a considerable extent, the position of our Canadian banks is creditable to a high degree. Our Canadian banking system, even though we may see its faults, has proved itself able to stand up under one of the most severe tests ever made. Wre may feel, therefore, that Canada is in a very happy position compared to many other countries. The banks’ reserves, as shown by their statements, now stand at approximately $162,000,000 against a paid up capital of $144,000,000. It should be remembered that forty per cent of their cash reserves must be in Dominion Government notes. 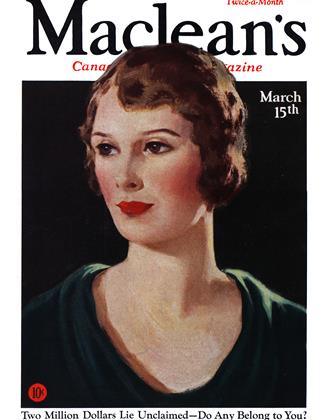