Question— My present holdings of SherrittGordon Mines, Limited, stand me $1.06 a share. What is the outlook?—Subscriber.

Answer—This company unfortunately came into production at a time when copper prices were falling. It has been doing remarkably well under the circumstances, but the outlook is not bright until copper prices show a substantial rise from their present low levels. Operating costs have apparently been earned during the past year, but, of course no allowance could be made for depreciation. The new annual report will likely be out by the time this is published in Maclean's and, as a shareholder, you will have received one.

Question—I have forty-five shares of General Steel Wares Cumulative preferred stock on which I received my last dividend on February 1, 1931. What is your opinion of this stock? What are the chances for back dividends being paid?—M. B., Montreal.

The possibility of back dividends being paid ! on the preferred stock in the near future ; appear to be remote. The company, however, is in a good financial position with a j ratio of current assets to current liabilities of Í about six to one. During last year inven-1 tories were reduced by over $1,000,000 and the bond indebtedness was reduced $404,500. Economies were effected which the j president estimates represent approximately j $1,000,000 a year in saving. The full benefit of this should be received in 1932.

Question—What is your opinion of Price Bros., Preferred?—M. B., Westmount, Que.

Answer—The annual report of the above company for the year ending December 31, 1931, showed the dividend on its seven per cent cumulative preferred stock to have been earned by a good margin. The profits from operations after providing for depreciation and interest were approximately $325,(XX) against preferred dividend requirements of $245,000. The company also showed a ] good financial position. Other things being I equal, however, I would prefer to have the ¡ preferred stock of some other company in an I industry which has been less affected by the present depression.

Question—Please inform me if British ! American Oil is paying or has paid dividends \ on their common slock since 1927. I have some j shares of the old stock. Is it necessary that I j should convert them into new, and if so how will / go about doing same?—./. C. 7'., Nova Scotia.

Answer—The British American Oil Company has been paying dividends practically since incorporation. In January, 1927, the old $25 par value stock was split four for one into new stock without par value. In June, 1927, shareholders were offered rights to subscribe to one share of new stock for every five shares held at a price of $17.50 a share. In February, 1930, the stock was split again two for one, which created the present j capitalization of 2,622,642 shares out¡ standing.

If you still hold the old stock you can convert the same by sending in your certificate to the company or to the Union Trust Company, Toronto.

Question—I hold common stock in Goodyear Tire and Rubber Company of Canada, bought in 1929 at an average cost of $310 a share. Do you think it advisable to buy more stock to lower the average?—A. B., Windsor, Ontario.

Answer—If you can afford to speculate and wait for the market in common stocks to recoup its losses of the last year or two, the common stock of Goodyear Tire is an excellent speculation and it might pay you to buy more shares at present prices for the purpose you mention. In the fifteen months ending December 31, 1931, the company rejxirted earnings of $8.24 a share on its common or at the annual rate of $6.59 a share compared with $8.01 in 1930. Dividends paid last year were at the rate of $5 a share. In 1929, when the stock sold at the 1 figure you refer to, earnings were at the rate of $21.94 per share. During 1931 liberal j allowances were made in the form of reserves for depreciation, goods and raw materials, depreciation of the company's bond investments, etc. The financial position of the company is very strong with a ratio of current assets to current liabilities of about twenty-five to one.

Subscribers to Maclean’s Magazine desiring advice in regard to Canadian industrial investments, or life insurance problems, will be answered freely. Enquiries should be addressed to the Financial Editor of Maclean's Magazine and a stamped, addressed envelope enclosed. 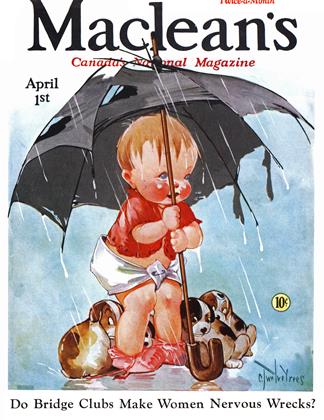