DOES mere mention of the word gingerbread call up happy memories, recollections of pleasant hours in a big, old-fashioned kitchen, the joyous anticipation of good things to eat?

The tempting, tantalizing odor of molasses and spices is still a magnet which draws young and old to the table, and the delicious flavor of fresh gingerbread never loses its appeal. It is still one of our favorite desserts, and if well made is second to none in popularity. It has held its place in our affections through sheer goodness, and no elaborate and expensive concoction can oust it from favor.

Then, too, it is appropriate just now when it’s smart to be thrifty and we are rediscovering the charm of simple living. For gingerbread is not expensive, may indeed be quite economical as well as satisfying and wholesome.

Gingerbread offers many opportunities for variety of service. It may be plain and accompany a dessert of fruit, or it may be dressed up in ultra-modern manner and provide the “something different" which piques our interest and appetite. In the simple home meal or on the company menu, in the lunch box or as part of the late snack, it will unfailingly receive enthusiastic approval.

There may be no one best recipe for gingerbread, but standard proportions and methods which give excellent results are included in the recipes following. Either of these two basic formulas may be varied considerably. You may, for instance, omit the sugar if you wish to serve the product with a savory dish early in the meal. You may change the flavor by adding other spices such as cinnamon or cloves, or you may use white instead of brown sugar.

The molasses used will affect the appearance and flavor of the product. There are different grades, varying in color from the amber of the best quality to the very dark shade of the less superior kind. Good results are often obtained by mixing the two grades to get a medium color and good flavor.

The liquid in a gingerbread mixture may be hot or cold water, milk, coffee or even fruit juice. If you are substituting

In a recipe which calls for molasses, soda is always used to counteract the acidity of this ingredient and make the mixture light. Too much soda is undesirable, so it should be carefully measured and sifted with the flour or dissolved in the liquid to free it from lumps. Cake or pastry flour is preferable, but bread flour will give an acceptable product if a little less be usedseven-eighths of a cupful instead of one cupful of pastry flour. Shortening may be lard, butter, commercial shortening oils, or dripping. The rather strong flavor of the latter is satisfactorily masked by the molasses and ginger.

There are two meth<xis of combining the ingredients. We may follow the same procedure as in mixing a cake, beating thoroughly and vigorously before but not after the dry ingredients are added. Or we may use the quicker method given in the second recipe and obtain very satisfactory results.

The batter in both cases is quite thin and may be poured into a loaf pan, layer cake tins, angel cake pans or muffin tins. Baking should be slow, at a temperature between 325 and 350 degrees Fahrenheit, the length of time, of course, depending on the size of the cake. Too hot an oven will impair not only the texture and appearance but the flavor, as molasses burns easily and if care is not taken a rather scorched taste will result.

cut in small pieces is particularly appropriate. Use about half a cupful with the recipe given.

Chocolate is sometimes used and combines well with the ginger flavor. In this case, however, the recipe needs a little more adjusting as chocolate is rich in fat; therefore two tablespoonfuls less of shortening are required. Reduce, too. the amount of flour by two tablespoonfuls for each cupful given. Use two squares of unsweetened chocolate melted over hot water and add it. if you are using the first method, to the shortening, sugar egg and molasses before mixing with the dry ingredients. If you are following the second method, add it to the liquid mixture before combining the two.

Serve gingerbread in many ways plain with stewed fruits, gelatine desserts, baked apples or any fresh fruit in season Or with whipped cream, hard sauce, chocolate, lemon, orange or marshmallow sauce. In this way it provides an excellent and easily made dessert suitable in many luncheon and simpler dinner menus. It is equally delicious when served with cottage cheese or cream cheese, and is well liked by those who prefer a bit of savory at the end of a meal.

If served as a cake, gingerbread is not usually iced, but it is sometimes sprinkled with granulated sugar before baking or with powdered sugar just as it comes from the oven. It sometimes has one of a variety of fillings to give it additional interest.

Ginger cake, ginger cookies, and gingerbread men for the children have rich, spicy fragrance and delirious flavor to recommend them. Their endless possibilities for varied and attractive service is an additional advantage which the housekeeper appreciates and which keeps this old-fashioned favorite still very much in vogue.

Cream the butter, add the sugar gradually and continue creaming. Add the beaten eggs and the molasses and beat

the mixture thoroughly. Sift the flour once, measure and sift twice with the soda, ginger and salt. Add these dry ingredients alternately with the sour milk to the first mixture. Pour into a greased baking pan and bake in a moderate oven. 325 to 350 degrees Fahr., for forty-five to sixty minutes.

Sift the flour, measure and sift twice with the soda, salt and ginger. Beat the egg, add the molasses, the coffee and the melted butter, and beat until thoroughly combined. Add the liquid mixture gradually to the dry ingredients and beat until quite smooth. Pour into a greased baking pan and bake in a moderate oven for twenty-five to forty minutes.

Sift together the flour, baking powder, spices and salt. Cut in the shortening with two knives, add the sugar and continue mixing until the mixture is crumbly. Take out one cupful of this crumbly mixture, and add to the remainder the beaten egg and the milk. In the bottom of a greased shallow pan, sprinkle one-half of the crumb mixture, pour in the batter and cover with the remaining crumbs. Bake in an oven at 350 degrees Fahr., for thirty to forty minutes.

Beat the egg, add the sugar and molasses and beat all together. Melt the butter in the boiling water, and add alternately with the sifted dry ingredients to the first mixture. Fill greased individual tins or paper baking cases half full of the batter, and bake in a fairly hot oven of 400 degrees Fahr., for about fifteen minutes.

Combine the molasses, brown sugar and melted butter. Add the egg and beat the mixture thoroughly. Sift the flour, measure and sift with the remaining dry ingredients. Add gradually to the first mixture. Chill the dough, roll out and cut with a tin cutter or use a liaper pattern and cut around it with a sharp pointed knife. Eyes, nose, buttons,

etc., may be made with cloves, currants, raisins and puffed rice. Bake on a greased baking sheet in an oven of 375 degrees Fahr., for about ten minutes. When cool, they may be “dressed up” with colored icing.

Cream the butter, add the sugar gradually and continue creaming until the mass is very light. Add the molasses and the beaten egg yolks, and beat well. Sift the flour, measure . and sift twice with the ginger, salt and soda. Add the dry ingredients alternately with the sour cream, and lastly add the preserved ginger and fold in the stiffly beaten egg whites. Pour into a greased baking pan. sprinkle the top with a little granulated sugar and bake in a moderate oven, 325 to 350 degrees Fahr., for thirty to forty-five minutes.

Two or three tablespoonfuls of blanched, shredded almonds may be added.

Melt the butter in a heavy frying pan, add the brown sugar gradually and stir until melted. Arrange the apricot halves, cut side up, in the pan, covering the entire surface, and carefully pour plain gingerbread batter over all. Have the pan not more than half full of the fruit and batter and bake in a moderate oven, 325 to 350 degrees Fahr., for thirty-five to fifty minutes. Turn out on a serving plate, and serve : with whipped cream or a sauce made from the juice of the apricots thickened with flour or cornstarch.

Make plain or quick gingerbread in a flat loaf tin and. when baked, cut it in two crosswise to form two layers. Put marshmallows between the layers, place the cake back in the oven for three minutes. Cool slightly, cut in squares and serve with whipped cream or marshmallow sauce.

To the recipe for plain gingerbread add half a teaspoon ful each of cinnamon and ’ cloves and fold in at the last three-quarter cupful of shredded cocoanut. Bake in a large, greased ring mold. To serve, turn out on a serving dish, fill the centre with drained shredded pineapple and top with whipped cream.

To the recipe for plain gingerbread, add half a teaspoonful each of cinnamon and cloves and add also quarter cupful each of i washed raisins, currants and chopped j candied peel.

DID YOU RECEIVE A NOTICE?

It is our policy to notify all subscribers well in advance of the expiration of their subscriptions.

The ever-increasing demand for Maclean's means that most issues are practically sold out before the printing is completed; and that copies are seldom available for mailing to subscribers who are even one issue in arrears.

Subscribers receiving “expiration” notifications are reminded that, to make certain of continued receipt of their favorite Maclean’s, it is necessary to send us their renewal orders promptly. 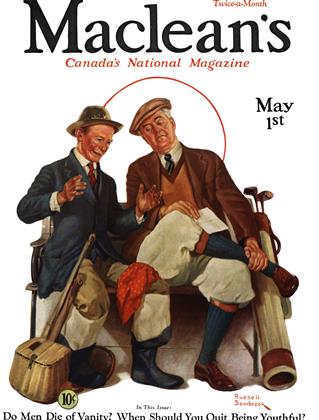