The story of Saskatchewan's experiment in education by mail

ONE cannot learn how to play the piano or become a popular entertainer in six easy lessons, but 6,000 pupils will tell you that personal application will win a high school diploma through the Saskatchewan Government Correspondence School.

Less than two years old, this school, which is the largest one of its type in the Dominion, has penetrated the most remote locations of the province to bring high school training to eager youth. Any boy or girl within reach of a Saskatchewan post-office can secure a secondary school education: Not only boys and girls, however, have seen fit to take advantage of this latest development in educational facilities sponsored by j the Provincial Department of Education.

! Adults, too, under special circumstances, have enrolled.

Today the school, which is the largest educational unit in the province, having enrolled 6,000 pupils, is also one of the most influential organizations, and yet it is only beginning.

North, south, east and west to the very borders of the province go the daily lessons prepared by the school headquarters located in Government offices at Regina.

Utter disregard for geographical barriers and sociological strata is exhibited by the school. No mountainous barriers, no wooded thickets, no swampy plains can keep them back. By boat and stage and in some cases by airplane, they penetrate, bringing culture to the very limits of Saskatchewan’s northern civilization. East and west to the boundaries of the province, and south to the international boundary, the school has extended. So close to the boundaries are some of the students that the school must deliver their lessons to post-offices in Manitoba and Alberta.

Into humble sod shacks the lessons go to be studied by candle and lamplight; into cabins in the forest area; into stone dwellings in the mineral belt; or into modern farm homes. A fleeting survey of the expansion of the school led officials to believe that the

limits of its penetration had been reached. But not yet, they found to their surprise.

CORRESPONDENCE came in from

Prince Albert. It was the usual request for lessons. The correspondence was filed and the lessons duly mailed. The pupil was enrolled and his progress watched. Completed lessons came into the school headquarters, and further lesson papers were sent out The pupil was progressing. It was not for some months that the staff of the school realized that the course had penetrated the thick stone walls and forbidding iron bars of the penitentiary to bring education to an unfortunate youth. The lessons continued and the youth showed excellent progress. ‘

Industrial schools and detention homes have been added to the lengthening list of pupil addresses. As a result, less fortunate youths are being given an opportunity to prepare for freedom and a new start.

The opportunity presented by the school to those otherwise unable to secure education is dramatically brought out in the scores of letters received daily.

Here a girl writes that she is planning to enter a nurses’ training school. She must have a high school education. Due to her family’s position she must continue to work, and but for the correspondence school her opportunity would have been denied her.

A youth of twenty-one years, through the death of his father, is managing a 400-acre farm with fifty head of stock to attend. He cannot attend school, but since the innovation of the correspondence course his opportunity has been found.

So, daily, Saskatchewan’s youth is finding opportunity in this experiment —which is no longer an experiment.

This year the school will be enlarged in scope. A new experiment will be tried. Daily, at specified hours, lessons, supplementary to those submitted through the mails, will be broadcast from stations scattered through the province. Thus the Government will turn the radio to its advantage in scattering education among the eager youth of the province.

All this remarkable development in the transmission of educational facilities has been accomplished through the Provincial Department of Education in a remarkably short time. The school was inaugurated in September, 1930, and is today the largest correspondence school in the Dominion

under Government control. It is most nearly approached by the correspondence instruction course provided by the Department of Education of British Columbia.

IT WAS late in the summer of 1930 that Premier J. T. M. Anderson, who holds the Educational portfolio in the Saskatchewan Provincial Cabinet, called together the chiefs of his department. He faced them with a problem which for many years has challenged the wide-flung and largely rural Province of Saskatchewan. It was the problem of assisting those ambitious students who, unable to get into the city, were being denied the benefits of high school education. Their demands were being served only by the rural teacher, often handicapped by having to teach as many as eight grades in one school.

Organization of the school presented a formidable task. There was little in the way of example to follow. Courses had to be prepared and methods of marking introduced. After careful deliberation, the first prospectus was issued. A two-page folio turned out on a stencil machine announced the school. It stipulated those who might take advantage of the offer. It outlined the course, named the fees and general regulations.

The school opened in September, 1930, with A. B. Ross, M.A., in charge. He was assisted by Miss Edith Sutherland, B.A., as instructor, and one stenographer carried on the routine clerical work. Twelve days after the opening of the school the enrolment numbered sixty-two pupils.

Instruction was provided by the school to:

1. Pupils who were in attendance at one-

room rural schools, such pupils to work under the supervision of the teacher, who had to assume all responsibility for the teaching. Although the teacher marked the answer papers, the school organized the work of the teacher.

2. Pupils who did not live in organized school districts.

3. Pupils who were physically unable to attend school.

4. Pupils who lived within a school district, but for some valid reason could not attend school. The course in Grade XI was offered to pupils living more than four miles from a school where the course was taught.

Under these restrictions the school’s enrolment has grown to a total of approximately 6,000 students, composed of 3,000 Grade IX pupils, 2.000 Grade X pupils and the balance Grade XI pupils.

Paralleling the tremendous increase in enrolment has been the necessary growth in staff from the humble beginning in September, 1930, to the present efficient organization. Today thirty employees, including seventeen instructors, the majority with university degrees, conduct the Saskatchewan Government Correspondence School. A mailing department, mimeograph department and secretarial branch of the school have grown proportionately with the enrolment.

As day by day the size of the school grew, educationists, forever critical of correspondence teaching, voiced their amazement. The development showed, too, that the youth of the day was not altogether given over to the jazz dancing, gin drinking demon with which it has so often been associated.

Shown the school records for the first few months of operation, the Premier of Saskatchewan said:

“It is most gratifying to find that we have several thousands of our future citizens spending their evenings engaged in the study of subjects of higher education.” 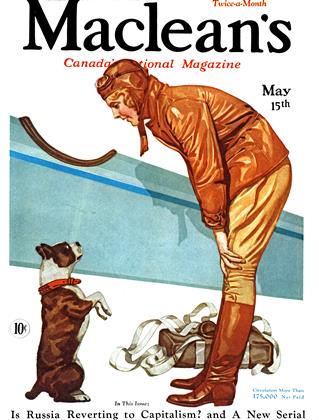