Hundreds of thousands of dollars are lost annually in Canada through careless investment. Fraudulent and worthless securities are being constantly poured on to the market to trap the unwary. A general observance of this simple maxim will assist in the reduction and elimination of this economic waste— •BEFORE YOU IN V EST—IN V ESTI G AT E”

THE assessment dub insurance idea is very simple,” says an attractive little pamphlet we read the other day. “It is nothing more nor less than pure protection life insurance at cost.”

“Our society,” the booklet continues, “is incorporated under the Societies’ Act of the Province of British Columbia and is authorized to form a group of 5,000 members so as to provide each member of that group of 5,000 with protection against loss of life or disability to the amount of $2,500, at actual cost by means of subscriptions from the members.

j “Any person in good health, not over j fifty-five nor under sixteen, may become a member by making application, on payment of the initial membership fee of $5, together with the first year’s dues or assessment of ; $5—in all $10.

j “Thereafter the annual dues are $5 a year, of which sixty i>er cent is put aside in a reserve fund in trust and the balance is used for defraying the expense of the society. In the event of the death of a member, there is an assessment not to exceed $1 per memlxr, which will decrease in ratio to 50 cents as the membership is filled up.

"If in any year the death rate is higher than anticipated, the directors will pay claims from the reserve fund without assessing the members. Provisionally, the anticipated death rate has been fixed at ten per year, so that the reasonable cost of assessments in any year should not exceed $10.”

Nothing New About It

HERE, in its own words, is the admittedly “simple” story of the “assessment club” life insurance plan. It is one of the earliest and crudest forms of life insurance i of which we have knowledge, it first having I appeared between 1706 and 1720 in even ! rougher form than we know it today. At : that time survivors of a group insured were assessed from time to time to pay death benefits, but this was done without any ¡ scientific basis, for no one knew the way in ! which life insurance premiums should be calculated.

That it is a plausible scheme is evidenced by the fact that after two hundred years it I still is in operation in various parts of the i world. For perhaps fifteen or twenty years each club finds hundreds of men and women who are both glad and anxious to secure a few thousand dollars’ worth of protection for the nominal figure of $5 a year, plus what appears for a time to be a minor feature, an additional dollar whenever a member dies.

But along its apparently primrose path, literally hundreds of societies in Canada, England and United States have gone to their financial doom.

j For some years now the Federal Department of Insurance and the insurance departments of most provinces in Canada have recognized this and, in the case of Ontario for instance, a provision has been inserted . in the provincial statutes to the effect that

any organization or society which collects moneys out of which gratuities or benefits are paid directly or indirectly on the death of its members must secure a license and must file a certificate that it is operated on an actuarial basis.

'“PHIS has automatically eliminated the “assessment club ” for its fundamental weakness is that it is not actuarially sound, and it is doubtful if any competent actuary can be found who would give such an organization a clean bill of health in this regard. The reason why so many flourish in their earlier years is that as long as new young members can be persuaded to join, the organization is able to build up a substantial income which considerably more than offsets the mortality expenses, which for the first fifteen or twenty years are comparatively light. It is in the later years of existence that mortality takes its toll and actuarial laws begin to work with disastrous financial results to those members of the society still unfortunate enough to be alive— a cruel anomaly for any organization purporting to offer insurance protection to men and women who join for the most part, believing they are getting their insurance protection at the cheaixst possible figure.

Roughly, there are four important reasons why assessment clubs invariably come to grief. These reasons are aptly summed up in a recent issue of the organ of the Life Underwriters Association of Canada, which has for years been undertaking an active and successful campaign in the Western provinces to finally stamp out these societies, as follows:

“So long as the assessments do not come too rapidly the modest assessment fee may be collected from a considerable portion of members, and the balance perhaps fully made up by admitting new members to take the place of those who failed to pay the assessments. But as soon as the members realize that their society is organized on the same fallacious system which, in years past, caused the failure of hundreds of other societies and under which not a single society has permanently succeeded, there would inevitably lx an increased reluctance to pay assessments, any waiting list established will disappear, and the returns to dependents will gradually diminish and finally become nothing.

“Members of all ages will finally realize the essential unfairness of a system whereby younger members are called upon to pay the same amount as the older members. The older a member becomes the more likely he is to die and the share or assessment of each member should be in proportion to his chance of death in the year the assessment is made, and the discrimination will become greater as the members increase in age.

“The tendency of all such assessment societies has been to show a considerable semblance of prosperity for a few years,

after which the debacle ensues more or less rapidly.

“The cost then becomes so high that a p;x>r man cannot pay; the richer members refuse to pay. and the beneficiaries of deceased members find it impossible to collect the amount named in their certificates.’’

JUST why these societies still operate in Canada at all is a question which naturally suggests itself when so much condemnatory evidence can be produced against them. As a matter of fact, with the passing of insurance legislation in Manitoba in recent weeks, which it is believed definitely closes the door of that province to the assessment club, there are fortunately very few opportunities left for them in Canada, all provinces having now closed the door to this plan of writing insurance in so far as the organization of new clubs are concerned. It is only in Saskatchewan and British Columbia that clubs already organized for some years are still being allowed to operate.

The reason given for this is that the insurance departments of these provinces have apparently not had the co-operation of their departmental and governmental officials, as has been the case in other provinces, and that in some cases political influence can probably be traced as the reason why these organizations have been allowed to remain in existence.

In Eastern Canada the formation of new assessment clubs has fortunately ceased to be a live issue, but the receipt by readers of Maclean’s Magazine of circulars and pamphlets such as have been quoted indicate that the older clubs which still continue to operate are apparently very much alive.

There are no bargains in the purchase of life insurance. The chance of buying $2,500 of insurance for an initial fee of $10 and an annual fee of $5 simply does not exist, for the reason that the span of human life being as it is, no organization on tins or any other continent can give this much insurance protection for so small a cost. Actually the net cost of insuring a man aged fiftytwo for $2,500 is over $90 a year, while even a young man of twenty must pay between $25 and $30 a year as long as he lives to get this protection. These figures represent actual net cost without any loading whatever for expenses, so it may readily be seen how disastrously expensive an insurance plan must eventually become which makes an initial charge of only $5 a year to all comers between ages sixteen and fifty-five, irrespective of age.

Át the present time “assessment club” insurance is practically the only type of insurance being offered to any extent in Canada which is not on a legal reserve basis. Practically every other life and fraternal organization doing business in this country under provincial or Federal license is on a legal reserve basis, which means that its premium rates and reserves ensure adequate payment of all liabilities when they become due.

When such excellent facilities are offered by legal reserve companies in Canada covering every conceivable type of policy, no other type of insurance should or need be considered by any one in this Dominion. 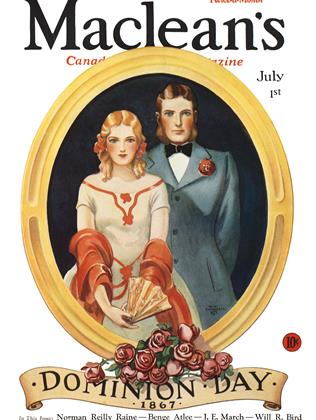