IT IS pickling time and kitchens, yours and mine, are fragrant with spicy syrups and the delicious aroma of fruits and vegetables fresh from the garden. There is something delightfully old-fashioned about it.

It always makes me grow reminiscent and think about familiar old-timey things like print aprons and hot gingerbread and sweet cider and a pan of currant buns.

And I never start to make pickles that I don’t want to run the whole gamut of fruity favorites which gave such a zest to grandmother’s home-made sausage or whole-baked ham.

Surely every woman who finds joy in being a good provider is now stocking her pantry shelves with sauces and savory relishes. Of course, each has her favorite —perhaps some well-tried recipe that has been in the family for generations. But that is no reason for not trying a new one, and where is the good cook who does not want to add new triumphs to her repertoire? Then, too, isn’t it a satisfaction to have a variety to suit every taste?

Then there is apple chutney, as popular as ever and easy to make. Many fruits are on the market at this season, reasonable in price because they are plentiful. What you cannot do with them isn’t worth the price of a new apron.

Pick your pickle recipes from among the best; then, when you set out to try them, choose the best materials. Spices should be fresh, vinegars high grade, fruit slightly underripe and without blemish.

Relishes of this kind are not hard to make and there is little risk of failure, but it pays to measure accurately and follow directions carefully. Of course, you may sometimes make variationsa little more or less of this or thatand achieve a delightful new flavor. If you do, jot it down somewhere so you will be able to duplicate your specialty next year. But unless you are experienced, pin your faith to a tested recipe.

MOST fruits offer more than one possibility in the relish line. Indeed many of them lend themselves to a surprising variety of forms and flavors. Apples, for instance, prove themselves generally useful here as they do in so many dishes. Firm, not too ripe ones may be spiced in

quarters, or they may be chopped and combined with raisins and other ingredients for a tangy sauce which is delicious with cold meat. Various combinations with other fruits suggest themselves as a relish for midwinter meals. Tomatoes may be turned into ketchup, chili sauce or chutney, and all are good. Green tomato pickles have long been popular and permit of many variations.

Other large fruits such as pears and peaches are usually “put up” whole or in halves, depending on the size. They are prepared as for canning and cooked in a spiced vinegar syrup. Do not remove the stones from all the peaches, as they give a particularly good flavor to the product. Watermelon rind is best when soaked overnight in a brine three tablespoonfuls of salt to one quart of water —then cooked in clear water until tender, and afterward kept in a pickling syrup until each piece is clear. This otherwise waste product

Plums and many of the smaller fruits such as gooseberries or blueberries win instant favor when spiced. They arc so easy to do that any one may lx* sure of success. You could not find a simpler recipe than the one for pickled cherries, which requires no cooking. Merely soak in diluted vinegar to cover, and, after draining, add sugar measure for measure. Spiced crab apples need no recommendation ; they have enjoyed popularity for a long time. Be sure to select those of uniform size, and do not pare or remove the stems.

A variety of these spicy fruits will add interest and piquant flavor to almost any luncheon or dinner. The new relish dishes with from two to five or six compartments allow you to serve as many kinds as you wish, and it is pleasant to pick and choose just what we fancy. By selecting those of different colors—fruits, vegetables and perhaps fresh, crisp celery and arranging them attractively, the dish presents a very appetizing picture, with a promise of delicious, zestful flavor. If you want to serve only one kind there are any number of little dishes of glass, china or pottery which are just the thing to hold your choice for that particular meal.

The following pickles are suggested as splendid additions to a store of g(xxl things.

Boil the sugar, vinegar and cinnamon for twenty minutes. Dip the peaches quickly into boiling water and rub off the fuzz with a towel. Stick four or five cloves into each peach. Put half of the peaches into the boiling syrup and cook until tender. Remove from the syrup and cook the remaining jx;aches. Pack into clean, hot jars, and fill each jar to overflowing with the hot syrup.

Peel the pears and cut the large ones in halves. Stick two or three cloves into each piece. Combine the water, vinegar and sugar, and add the remaining cloves and the cinnamon tied in a bag. Boil for ten minutes, add the pears, and cook for twenty minutes or until the pears are tender but not soft. Pack in clean, hot jars and cover with the syrup.

Select firm crab apples of uniform size. Remove the blossom end but leave the stems and skins on, and wash carefully. Make the following syrup:

Mix the sugar and vinegar, add the spices tied in a bag and the lemon rind. Boil for five minutes, add the crab apples, and simmer slowly to avoid bursting them. Cook until tender, pack into clean, hot jars, and cover with the syrup.

Tallman sweet apples are delicious when spiced and may be done the same as pears or crab apples.

Stem and wash the gooseberries, add the I sugar and boil quietly for twenty minutes. I Add the vinegar and spices, varying the I amounts of the latter to suit individual ! tastes. Stir and simmer until thoroughly I combined, and pack while hot into clean, j hot jars.

A little nutmeg if desired

Wash and stem the grapes and weigh ! them. Slip the skins from the pulp and i simmer the pulp until very soft. Press ; through a fine sieve to remove the seeds.

I Add the skins, the sugar, vinegar and spices,

¡ and simmer until the mixture is thick, j stirring frequently.

Wash and dry the plums, and place in a ! large bowl or crock. Combine the vinegar.

I sugar and spices, boil for ten minutes and i ix>ur over the plums. Cover and let stand ! overnight. Drain oil the syrup, bring to a j boil and add the plums Cook until the ! fruit is clear but not broken, and pack in ■ dean, hot jars. Fill with the syrup and seal.

2 Cupfuls of vinegar 1 Cupful of water

To prepare the watermelon rind, remove i all of the green skin and the pink flesh and cut into cubes or strips. Cover with a brine solution—three tablespoonfuls of salt to one quart of water—and let stand overnight. Drain, cover with fresh water and boil until ; tender. Mix the sugar, vinegar and water,

add the spices tied in a bag and the thinly 1 sliced lemon. Boil for five minutes, add the drained watermelon rind, and cook until transparent. Remove the spice bag. pack in clear, hot jars, and fill each jar with the hot syrup.

Chop the apples, onions, green pepper and raisins fine. Add the vinegar, sugar, salt and the spices tied in a bag. Cook for one to one and a half hours or until the ingredients are tender. Seal in clean, hot jars.

Carefully wash and prick the small whole tomatoes. Combine the sugar, vinegar and ¡ the spices, bring to a boil and pour over the tomatoes. Let stand overnight, drain and j boil the syrup until it coats a spoon. Add j the tomatoes and cook slowly until they are I clear. Seal in clean, hot jars.

Peel the tomatoes and cut them into pieces. Simmer for half hour. Then add the spices, seasonings, vinegar and sugar and simmer for one and a half hours. Seal in sterilized jars and serve with meat or fowl.

Use elderberries which are just underripe, strip from the stems and wash. Wash the apples and cut in small pieces, leaving peeling on and cores in. Combine the fruits, and j add water so that it can just be seen through I the pressed down fruit. Mash and stir well, and cook until the mass is reduced to a mush. Drip through a jelly bag and boil the juice I for twenty minutes, measure and add an ! equal quantity of sugar, boil again for five minutes or until two drops form when dripped from a spoon. Pour into sterilized glasses and seal with paraffin.

Stem and wash about three pounds of grapes. Crush thoroughly and add half a j cupful of water. Stir over the heat until it boils, cover and simmer for ten minutes Drip through a jelly bag. Measure four ; cupfuls of juice into a large kettle, add the j sugar, stir and bring to a boil. Add the : [lectin at once, bring to a full rolling boil and j boil for half a minute. Remove from the fire, let stand one minute, skim and pour into sterilized jelly glasses. Seal as for the : other jellies. 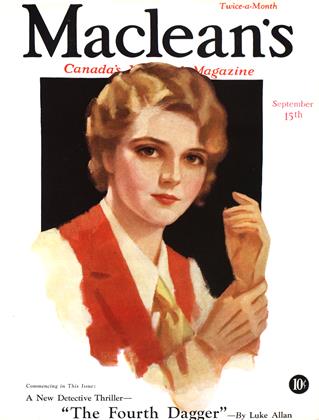