Last September the Duff Transportation Commission, after nearly a year’s intensive study, brought in a report widely heralded in the press as ushering in a new era in railway control and operation. Gone were the days of the Railway Builders; gone the days of unbridled railway competition, of duplication of services, of enormous and unprofitable capital outlays.

This view persisted until October, when the legislation embodying the Duff recommendations was submitted to Parliament. At once it became evident that Parliament would not necessarily accept the Duff solution of the railway problem.

Arthur Meighen, Government leader in the Senate, in introducing the measure said:

“Permit me to say a word as to the spirit in which this bill is presented. I want it very clearly understood that the Government is not absolutely wedded to any particular clause of this measure . . . It is true that all bills presented to Parliament are subject to amendment; but in this case, even to a greater degree than usual, it is desired that amendments should be freely offered and suggestions openly made . . . It is the earnest desire of the administration that members on both sides of both houses should have the utmost freedom in offering suggestions and amendments. What may be considered and demonstrated to be impracticable we are certainly free to reject; what both Houses of Parliament believe to be improvement, we are equally free to accept.”

A CANVASS of members of the Senate and the Commons at the time the bill was introduced, revealed a majority in Ixrth Houses opposed to the vital clause of the Dulf recommendations—the creation of a super-railway control board. Then the Senate railway committee tk the bill in hand. It was torn apart and reassembled three times in all. To some extent, the committee reopened the railway question, resumed the quest for a solution. But as Senators came face to face with the issue, as Commoners watched them, there became apparent a gradual change of heart. The disposition to begin the railway enquiry anew gave way to a feeling that the Duff recommendations should be accepted at least in substance. This, certainly, was true at the time Parliament adjourned. There is, however, a formidable group of Senators who believe that the Duff rejxirt is merely palliative of our railway ills, not curative, and who will press vigorously next February for a scheme of amalgamation, joint management or unification. These terms are not entirely synonymous.

Meantime, five stout volumes containing 300.000 words, being the evidence taken by the Duff Commission—the views of our captains of transportation, railway experts, boards of trade, farmer and lalx organizations, responsible citizens have been deposited in the Library of Parliament. This mass of evidence will never 1* printed, never made available to the general public, although it contains all of the information ujx which the Duff Commissioners based their report and constitutes a greater bulk of data on Canadian railway operation, past and present, than ever has been gathered together before. Examination of this evidence indicates, very strongly, that witnesses were under the impression that, since all hearings were in camera, what was said would never become public property. They s frankly, did not mince words. Thus Gerard Ruel, former vice-president of the National Railways, is found condemning public ownership; S. J. Hungerford, now president of the National, is found expressing the view that private ownership is more desirable than public ownership.

But of supreme public importance is the fact, revealed by this evidence, that the Dull Commission accepted, with modifications, only one of three concrete, well-considered solutions of Canada’s railway problem. The Commission took the Thornton solution, modified it, presented it to the Government and the country. Other equally well thought out solutions were placed Indore the Commission by E. W. Beatty, president of the Canadian Pacific, and Mr. Ruel, vice-president of the National. These solutions have not received nationwide publicity.

Inasmuch as Parliament may ultimately reject the Duff recommendations, though this now seems unlikely; may modify them; may tackle the problem anew, the nature of all four suggested solutions is of public imjxirtance.

The Duff and Beatty Proposals

TO BEGIN WITH, there is the Duff report. The Duff Commission would solve

Canada’s railway problem in this way:

1. Abolish the present National Railways directorate of seventeen members, and substitute, as the supreme body of control, a l)oard of three trustees. The chairman of this trustee board would be all powerful, would hold office for seven years, the other two for shorter periods. In all decisions of this board a majority rule would apply, with the proviso that the chairman must lx? one of the majority.

2. Set up a joint committee, comjxwed of National Railways trustees and Canadian Pacific directors, to formulate and put into operation joint economies, to remove duplication, to prevent unnecessary competition.

3. Create a super-control board, caller! an Arbitral Board, of not less than three members, to decide matters upon which the joint committee cannot agree. The chairman of the Arbitral Board is to be Hon. C. P. Fullerton, chairman of the Railway Commission, and each railway is to appoint a representative. Thus the normal strength of the Ixiard will ta* three, but if additional members are desired the president of the Exchequer Court

may nominate two mort*, bringing the maximum strength to five members. The powers of the Arbitral Board are extraordinary,

While it is not to ta a jmanent railway court—a new board being provided for each dispute—Mr. Fullerton is to ta* chairman

each time the board is set up. The board’s powers are to be supreme, and from its decisions, save on a question of constitutional law. there is to ta* no appeal. Its decisions will override the Railway Commission, and will ta' mandatory* ujx railway managements. No decision of this board

will ta' binding unless the chairman is an assenting party. Fhus Mr. Fullerton, under

This is the Duff solution, and the clause which hitherto has failed to carry the support of Parliament concerns the Arbitral Board.

The I hi If Commission did not make an estimate of the economies its solution would effect, but in the evidence it. appears that the maximum benefit would approximate $3fi.000.(XX) ]x*r annum. And it would require from three to five years to achieve this goal.

The Beatty plan is much simpler, holds out promise of greater economies Mr.

Beatty proposes that the Government, as owners of the National, should lease the publicly owned system to the Canadian Pacific Railway either in perpetuity or for a long of time. This would create a privately operated railway monopoly, but in Mr. Beatty’s judgment, owing to restraints and controls placed upon railway operation by statute, it would not be attended by inefficiency or a “public be damned” attitude on the part of the proprietors.

Mr. Beatty has no doubt as to the wisdom of his solution. He told the Duff

“Under existing conditions in Canada, the only solution which will stand the test of

the country’s necessities is a consolidation, through a lease on a profit-sharing basis, of the Government railways to the Canadian Pacific Railway . . . Postponement can only aggravate the situation. The combined net earnings of the two railways in 1928, the greatest year in the history of transportation. would not be sufficient to pay the dividends fat the then rate) and the present fixed charges of the Canadian Pacific and as much of the interest on the debt of the Canadian National Railways as is now due to the public . . . I do not know when another year equal in traffic to that of 1928 will come, but of this I am certain, that when it does come the railways will be even less able to meet these outgoings.” 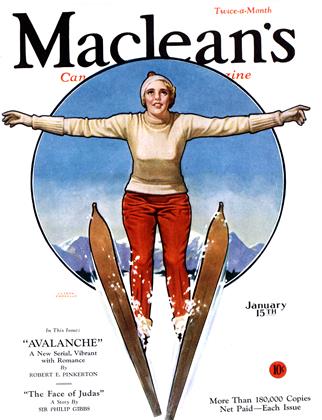