Question—I think there is a great possibility of our money being more inflated soon, as the United States is doing at present. Do you think this is so?

I would like two or more low-priced stocks that would benefit from inflation—reflation, deflation or whatever it is.—J. W„ Estevan, Sask.

Answer—As a result of the policy of "controlled” inflation announced in the U. S., prices of both stocks and commodij ties have advanced materially in that country and Canadian stocks have had a similar rise. Canadian markets are tied so closely to those of the United States that such a rise was inevitable, and it is difficult if not impossible to foresee just what effect a Canadian policy of inflation would have in moving prices of Canadian stocks and commodities still higher.

The prices of commodities such as wheat, j com, cotton, etc., have been subject to apj preciation, and companies which have large ' inventories of these commodities or are likely to experience increased consumer purchasing power as the result of increased commodity prices would naturally benefit earliest and most.

A company such as Canadian Canners with large inventories of canned stuff j manufactured at low prices and low costs ■ prevailing in 1932 would benefit materially j by the increased valuation of inventories. | Chain stores such as Dominion Stores, Limj ited, and Loblaw Groceterias Company | whose profits vary according to the dollar ! volume of business handled could expect to get a larger profit as prices went up, and also | eventually a larger volume of business as ! public purchasing power increased. If inflation stimulated the volume of business j in the country to any great extent, the railroad and equipment manufacturers should ultimately benefit. When the higher prices work back to the farmers, farm implement companies will get the benefit.

Before taking it too much for granted that Canada will follow the United States example, one should take into consideration arrangements now being made in London for financing. The British monetary policy will have great influence.

Question — Would you be good enough to give me your opinion of Brewers and Distillers of Vancouver and the. prospects for a short hold?—H. D. Aí., Pclrolia, Ont.

Answer—Brewers and Distillers has had a fairly good earnings record in recent years except in 1931, when drop in value of inventories caused a loss. The chief hope for increased revenue now is that when the liquor laws of the United States are finally re-1 pealed, there will be a big demand for Canj adian liquor until stocks of fully matured | liquors have been built up by United States distilleries. If that is realized, it would be helpful to this company for four or five years.

Question—/ bought Ford of Canada when it was high in 1929. Would it be well to buy more so as to average down my investment, or to sell what I have got and buy something else?—B. A., Windsor, Ont.

Answei—Ford of Canada’s present sides and earnings are not believed to be high enough to warrant an early expectation of dividends. One who buys or holds this j stock docs so because he expects there will ! be a great improvement as purchasing power j of the general public grows larger. His I reason for thinking this is that the company j in the past has given an excellent account of itself in good years, and since its change over from the old cars to the new it had one or two good years before the depression cut off good business. It has stronger and more able competition than ever in its history, but Ford has a strong financial position. large, excellent affiliations with other Ford companies in the world, and has excellent automobile engineering advice on the production end. 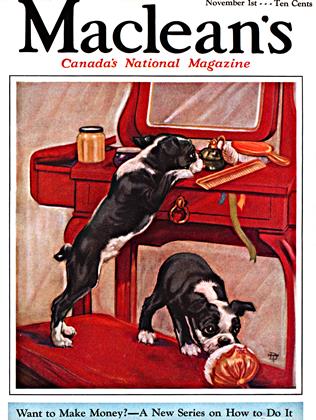