IN ALL the welter of grief brought about by the economic depression, probably no industrial crash or financial failure in the outside world was more keenly felt than tire suspension of the “Bank of Prison Gold” at Collins Bay. The bank was solvent, it was 100 per cent liquid, it had a full and good “deck of weed” for every deck it owed. Y'et it failed to pay as much as “one drag on the deck” to its depositors.

Verily, there was weeping and wailing and cleaning of pipes among the tobaccoless inmates of Collins Bay.

The penitentiary law is : Thou shalt not hoard tobacco. Every seven days each inmate receives one deck (l/llth pound of pipe tobacco. This is prison gold. An inmate may smoke his weed, he may give it away or even throw it away if he’s “dingy,” or he may use it as local currency to purchase whatever the market has to offer in combs, belts, lighters or what not. But—and here is the stinger in the prison law—he may not save it and hoard it.

Naturally, in the matter of minor infractions—that is, a half deck or a few extra “drags” (cigarettes) left over from the previous week—the law is observed in the breach. But when several decks are collected and saved, then the blind lady of justice strikes.

Now, to understand the depositors’ hysteria, it is necessary to understand prison currency. Just as in its strangely established grades of prison society, a penitentiary gives examples of the action of biological laws that mock the communists, so with tobacco—weed or prison gold—the laws of currency and of barter and trade are exemplified.

Bets are made payable in weed, and the odds will run from even money—say, drag for drag—to one drag against ten decks, which would amount to nearly 1,000 to one. Half a deck will buy a crude contraband comb. Two decks of weed might purchase a highly artistic comb, perfectly made out of mahogany and cleverly inlaid in white. Belts, likewise contraband, are priced at from half a deck for a simple cloth band to, say, three decks for a strong leather belt with buckle. Similarly, a plain “works” could be secured for half a deck, while a de luxe lighter, with a copper tinder box and leather carrying bag, might bring three decks on the local market. Extra eggs, pieces of butter, pie or cake, all have their value. So, too, have “onion skins,” which are “outside” cigarette papers. Upon rare occasions a pocket knife, a mirror, or a summer undershirt made out of a stolen sugar bag, may be offered for sale.

In all these transactions tobacco is the currency, and the deck—a week’s supply—is the basic unit of value corresponding to the dollar.

Now, the normal operation of the law of barter and trade results in the accumulation of wealth. The poor get poorer, the rich get richer, and capitalism just naturally evolves. But capitalism can hardly operate satisfactorily, without the use of some sort of public depository, clearing house, or bank. Thus, in its tum and obedient to an inevitable commercial law, the Bank of Prison Gold came into being. Its head office was the steward’s grocery storeroom, its safety vault was a large raisin bin, and its ledgers were the stiff

backs off the packages of toilet tissue. All the usual bank personnel were rolled into one. The inmate who weighed the beef, counted the eggs and measured the Hour was— in his spare time—president, board of directors, manager, cashier and messenger boy. for the thriving financial institution.

AND THE thing worked. Every hour of the day or k evening, clients could withdraw or deposit their funds. It was, in point of financial fact, a jx^rambulating bank, an institution on legs, for it carried its services right into the homes and places of business of its clients. It was ultra-modern and advanced. You did not have to go to a cashier’s wicket and present a cheque. You did not have to submit a financial statement to secure a loan. Wherever the president or office boy happened to be, there too was the bank in person, ready to serve and help you. You made your dejx>sits, received payment, or negotiated a loan, wherever you were and whoever you were. It was a perfect example of the mutual system, for it worked without profits. Indeed, it exceeded any outside co-operative efforts, for every' last one of all the bank staff and officials worked himself without salary'.

There was only one rule. Deposits were entirely at owners’ risk. The bank guaranteed nothing. Oh, fortunate rule! The day of suspension came. The bank closed and its deposits vanished—yet against the officials there was raised no word of blame. The little circumscribed world realized that an economic depression, utterly beyond their control, had fallen upon them.

The cyclone rose so innocently. It was, again, the cloud in the sky no larger than a man’s hand. Unfortunately, the hand was attached to one of the senior officers. In search of a mouthful of raisins, as he strolled through the storeroom, the hand was thrust aimlessly down into

the raisin bin. It came out clutching, not raisins but packages of tobacco !

The majestic wheels of the law began to turn. Perhaps they squeaked, but to the officer hi? discovery meant conniving, trafficking, hoarding—a deep plot! He acted promptly. The bank was closed and its deposits confiscated. Grief supplanted joy. The packages of fragrant weed were gone, and in their stead was an aching void.

The story of the enforced suspension swept awesomely through the compound. Inmate and official whisper spread the sad news. Tales of trafficking vied with descriptions of the way the bank was raided and searched. And, ever as the story grew, smoke-hungrv inmates questioned each other:

“Did you have weed on deposit?”

“How much did you lose?”

“Serves him right. Funny how many aces that guy holds.”

"I wonder if the warden will give the weed back?”

“Huh,” chuckled one of the better informed commentators. “They put the brokers in here because they were ‘short’. Now they’ve caught them ‘long.’ If that isn't real information, there isn’t a stock ticker in Wall Street.”

GRIEF rarely comes singly. A few weeks of bitter economy had scarcely repaired our losses in the great bank failure, when disaster again engulfed us. They changed the brand of toilet paper.

Scoff, you who wish; laugh, you who dare but to most of the convicts in Canadian penitentiaries, the mere thickness or texture of toilet paper is the hair line that separates satisfaction from desperation.

Toilet paper to a convict is like hairpins to a woman: we can do anything with it. But it has to be of the right thickness and texture.

Thanks to the mistaken activities of certain women’s organizations, cigarettes are taboo in prison—officially taboo, that is. Yielding to the importunings of groups of half-hysterical women who deplored the smoking of cigarettes by convicts, the prison authorities restricted the issue of tobacco to a coarse variety suitable for pipes. The embattled feminine reformers were satisfied. The seductive and iniquitous cigarette had been prevented from perverting our prison population.

But official regulation was—this time at least blended with official wisdom. No attempt was made to prevent a convict rolling a cigarette out of coarse pipe tobacco. Thus was demonstrated how close virtue sometimes lies to sin. It was all in the texture of the tobacco and the way it was used.

Just so with toilet paper. It was all in the texture. Some paper is strong and dense: it will roll the coarse tobacco, and when

rolled the cigarette will draw. Some paper j is soft, it will not roll: you can’t “lick” it sealed and it is so porous that it won't draw.

And herein lay all the law and the prophets !

Who did the deed, we never knew; perhaps never will know. But. suddenly and without warning, a new variety of toilet paper appeared. Hastily it was examined, rolled, smoked, tested and found wanting. There was grief in the land. Nay, more, there was anger and resentment. What thoughtless numskull made the change? Who made a profit by selling a different kind of tissue to the institution? Was it done deliberately to stop us smoking cigarettes? Was it just done to annoy? These were the questions that passed through many minds, and the men who asked them did not smile.

Even under normal conditions tempers are short, and a spirit of resentment is easily aroused among imprisoned men. It needed only some act of official stupidity or arrogance, such as the change of toilet tissue, to inflame dangerous passions.

But the occurrence had its comical side. The old variety of toilet tissue suddenly achieved a commercial value. Odd pieces, half pads or whole pads of the old grade, were removed from their usual places and duties, and were carefully cherished. The man who possessed a whole pad was rich. He was a collector of prison antiques. In fact, he became a dealer. Thus, a new product, a new commodity, was introduced to the prison market, and a new series of prices was established.

For example, ten sheets of the old variety of paper were exchangeable for enough tobacco to make one cigarette. A whole, unbroken package of the paper was so rare a commodity that it never achieved any set value of exchange. Indeed, it was almost beyond purchase or price. Yet there was one whole package in existence, and because of it the Bank of Prison Gold reopened its dtx>rs.

The laws of the land wherein we unwillingly dwelt, said: “Thou shalt not hoard tobacco.” Hence fell the bank. But the laws did not say anything about hoarding toilet paper. Hence the bank rose.

Again its d;x>rs o|>ened; again its president trod the paths of high finance: again barter and trade, deposit and withdrawal, occurred and yet the complete, sole and entire paid-in capital of the institution was one pad of toilet paper !

This is the eighth in a series of articles on penitentiary lije at Kingston and Collins Bay. The ninth and concluding article will appear in the next number. 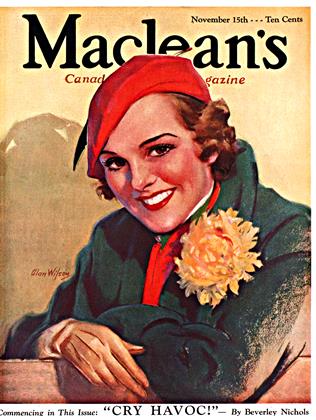