ONE OF THE legends about Miss Jean Harlow’s early career is that she first attracted the attention of a director when she was seen standing in front of a drugstore licking an ice cream cone. It was her hair naturally that caught his eye. Probably he figured that even the people who didn’t actually admire it couldn’t help being astonished by it. So he took her back to Hollywood with him, and so inaugurated the strange series of events more or less historically recorded in “Bombshell” (Metro-GoldwynMayer).

Whether the legend is true or not doesn't matter. The point is that if Miss Harlow hadn’t had anything to offer the world except her remarkable hair she would by this time be back in her home town again, rather more thoughtfully licking ice cream cones. Fortunately she had a particular talent which even the most discerning director could scarcely have recognized at that time—a gift of comedy exactly suited to the talking screen.

What the talkies demand in the way of comedy are not pale flickers of whimsy or carefully refined ironies, but lively outright characterization with an immense push of vitality behind it. Hence the popularity of Mae West, Marie Dressier and notably of Jean Harlow.

Lee Tracy has the same high-handed comedy gift as Jean Harlow. And whatever enjoyment you get from “Bombshell” you will get from these two. The picture itself is a sort of frenzied travelogue of Hollywood. And the light it throws on Jean Harlow’s personal experience there seems to indicate that, for what it has brought her in immediate ecstasy and subsequent wild regret, Hollywood for Miss Harlow has been the biggest ice cream cone on earth.

The Way to Love

Maurice Chevalier has always been a recognized authority on his own subject.

For the past half-dozen years he has been giving film demonstrations on the way to love almost as expertly, modestly and conscientiously as Bobby Jones on how to play golf.

But a picture or two back it began to look as though Specialist Chevalier were growing a little tired of his subject. Indeed it almost seemed as if he made love better than anyone else simply because he had made it so much oft ener. It was sound but it wasn't spontaneous. In “The Way to Love”

(Paramount), however, he is back with all his old enthusiasm and charm. This time he is really in love with Paris, and he makes it seem quite a lot more important and amusing than being in love with Miss Ann Dvorak.

In addition there is a strange, dubious little shop such as you would never see anywhere except in Paris, and probably wouldn’t see there; and M. Bibi, a middleaged

gentleman, very querulous, worried and agile, who takes his pleasure in cutting off people’s neckties; and a paranoiac knifethrower whose hobby is just to miss cutting off people’s noses. The result is a picture whose oddities are brightly spread over a considerable surface and don’t centre on the places M. Chevalier goes and the things he does in his black satin pyjama suit. “The Way to Love” is the best Chevalier picture in a long time—as innocent and at times almost as ingenious and diverting as a “Silly Symphony.”

With screen musical comedy developing as it has in the last year, “Footlight Parade” (Warner Brothers and Vitaphone) was bound to come. And just as in oldfashioned silent comedies the climax arrived when a pipe burst and everybody was washed downstairs and out of the picture, so Warner Brothers finally reached the point where they could only completely express themselves by turning on all the taps, flooding the set and submerging everybody in sight.

“Footlight Parade” doesn’t reach its finale with the reunion of the lovers in the ordinary way. Instead, it appears to build up to an enormous mass tribute to the N. R. A. and President Roosevelt. And by this time, with the shouting of directors and principals, the pounding of the surf, and the wild manoeuvring of the chorus, you hardly know whether what you are finally witnessing is the end of the picture, or an eruption of newsreel, or President Roosevelt administering the “New Deal” in favor of Miss Ruby Keeler who has inadvertently joined the United States Navy.

Turn Back the Clock

“Turn Back the Clock” (Metro-Goldwyn-Mayer) is a picture that will be enjoyed by the large group of Mr. Lee Tracy’s admirers, which includes the present reviewer. It is all about how the hero, having expressed a wish to live the past twenty-five years over, has his wish suddenly granted. Quarrelling with his wife, he rushes out of the house and is knocked over by a motor. The result is one of those convenient cinema-concussions which knock the victim clean out of the present—a notion with which Hollywood at the present moment is simply infatuated.

In the end the hero returns to the present, with one idea held firmly in his mind—that Money Doesn’t Bring Happiness. This idea, which people are almost as

ready to admit as they are unwilling to believe, is admirable material for treatment which is at the same time sentimental and lively. Lee Tracy’s animated performance pushes the picture along at the necessary pace.

"Ann Vickers” (RKO) is such an honest, carefully considered, highly dignified picture that it deserves to be a whole lot better than it is. Ann, as you know if you have read Mr. Sinclair Lewis’s novel, was a prison reform worker; and that may be what is the matter with the picture. We are too much used to our heroines having their adventures in penthouses to enjoy their having them in penology. Anyway, Ann is just the sort of fair-minded, intelligent, nice-looking girl you might meet in any middlesized city, and her experiences with men are perfectly credible and are firmly and competently handled. What we are accustomed to, however, and have even grown to like, is young women of incredible beauty—perfect fools they are, too, most of them—hanging all the time over wild emotional vortices. It is a gaudy preference, no doubt, but there it is, and somehow it unfits us for the restrained sufferings of Miss Ann Vickers. The book has been modified.

“Emperor Jones” (United Artists) is one of those rare plays of strictly literary origin that seem to be perfectly at home on the screen. This is partly because of the combined discretion and imagination with which it has been prepared for screening; partly because of the magnificent presence and performance of Paul Robeson, and partly because the original power and intensity of the drama are such that even unsuccessful handling could scarcely have obscured its strange impressiveness—and the handling in this case has been unusually sensitive and fine. The opening scenes, relating the early experiences of the Pullman porter who became an emperor, while not strictly Eugene O’Neill, are in no sense an attempt to "improve” on the dramatist. They are there simply because the cinema version requires a little more elucidation than is given by the stage original.

THE PRIVATE LIFE OF HENRY VIII—With Charles Laughton in the title rôle. A very fine picture both for those who know their history and for those who don’t. . ,

I’M NO ANGEL—Mae West wrote the play, so it is well ■ adapted to her talent's. Much more innocent than it sounds.

NIGHT FLIGHT—A picture about flying and not as you might suppose about Clark Gable, Helen Hayes, et al. Very fine film for everyone to see.

THE POWER AND THE GLORY—The story of a man’s life, very finely told through the new “narratage” method. Adult entertainment.

BERKELEY SQUARE—A very beautiful, deeply touching picture, though even adults may wonder occasionally what it’s all about.

TORCH SINGER—'Claudette Colbert in some good clothes but a poor story. Not suitable for children—or for adults either. 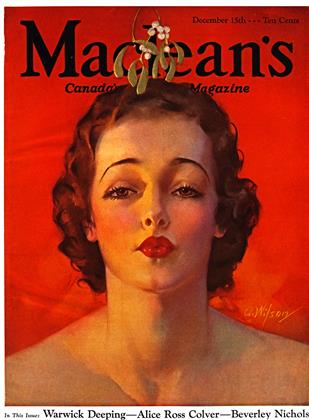