In the Editor's Confidence February 1 1933

LAST ISSUE, in heralding the contents of this issue, we expressed the belief that nobody would contradict us were we to say that no author can get more color and atmosphere into a romantic period story than Rafael Sabatini. This at once attracted the attention of Horace, the composing room messenger, who considers that he has done his good deed for the day if he proves that we are all wrong. Horace immediately read the proofs of “The Lord of Time,” which appears on page ten, and to his utter amazement, found himself agreeing with us. With a magnanimity born of New Year's Eve, he came and told us so. “But,” he added, “that guy Cag-what’s-his-name was a fake. He mesmerized those birds.”

We told Horace that no less an authority than the Encyclopedia Britannica supported his statement. “What?” said Horace. “Do you mean to say there actually was a Count Cagli-what-have you?”

“Certainly,” we said (having just looked it up), and reaching for volume BRAl to CAST, we read unto him as follows:

Italian alchemist, and impostor, was born at Palermo. Giuseppe Balsamo (for such was the “count’s" real name) fled from Sicily to escape punishment for a series of ingenious crimes, and visited in succession Greece, Egypt, Arabia, Persia, Rhodes (where he took lessons in alchemy and the cognate sciences from the Greek Althotas) and Malta. There he presented himself to the grand master of the Maltese order as Count Cagliostro, and curried favor with him as a fellow alchemist. From him he obtained introductions to the great houses of Rome and Naples. At Rome he married Lorenza Feliciani, with whom he travelled under different names, through many parts of Europe. He visited London and Paris in 1771, selling love-philtres, elixirs of youth, mixtures for making ugly women beautiful, alchemistic powders, etc., and deriving large profits from his trade. After further travels on the Continent he returned to London, where he posed as the founder of a new system of freemasonry, and was well received in the best society, being adored by the ladies. He went to Germany and Holland once more, and to Russia, Poland and then again to Paris, where, in 1785, he was implicated in the affair of the Diamond Necklace; and although Cagliostro escaped conviction by the matchless impudence of his defense, he was imprisoned for other reasons in the Bastille. On his liberation he visited England once more, where he was confined for a while in the Fleet prison. Leaving England, he travelled through Europe as far as Rome, where he was arrested in 1789, He wa3 tried and condemned to death for being a heretic but the sentence was commuted to perpetual imprisonment, while his wife was immured in a convent. He died in the fortress prison of San Leo.

In short, an ideal character for Mr. Sabatini. Incidentally, while he is as English as roast beef and Yorkshire pudding, Rafael Sabatini was born in Italy.

What Love and Monocles Can Do !

WE DON’T expect to get many letters of sympathy for Judith. Judith is the dashing, smartlooking young woman in Velia Ercole’s short story, “Accident,” which opens this issue. Lifted from poverty herself, she turned her back on Terry Lowry because he was poor; then rejected a millionaire because she discovered that she still loved Terry. And then, finding that Terry had gone and married another girl, she deliberately set out to win him back again. Goodness, what a woman! Even Carl Shreve, who illustrated the story, and who can forgive a lot if a cirl looks well in a picture, got quite peeved at her.

Men who wear monocles are not common in Canada (nor are they in England for that matter), so that whether the single pane focuses the vision or not it certainly focuses attention. But in “Through a Man’s Monocle” Christine Jope-Slade presents an entirely new idea with regard to the effect an eyebrow casement can have upon the life and outlook of a shy and retiring fellow like Francis Gedge.

Miss Jope-Slade is a regular contributor of fiction to the leading magazines of two continents. She is also the author of a successful play, which is being made into a talkie. She has travelled widely, but still has, as she puts it, “the vaguest and most unusual ideas of Canada. I vision you dashing through sparkling snow at Christmas, wreathed in woollies and smiles and skis.” Darn that man Kipling, anyway. As a matter of fact, Christine, there was a lawn-bowling tournament held in Toronto on Christmas Day. Since then, of course, woollies have been worn, but not so that you would notice it.

An Eastern Gale and a Zephyr

(T JUST HERE, a strong gale is heard approaching from the East. It breaks with full force on page nine in the form of a Maritimer speaking his mind. K. A. Baird is a medical doctor of Saint John, and his diagnosis of one of Canada’s major problems does not mince matters. We are now awaiting an answering Chinook from the West.

There are, of course, a lot of people who believe that it will be a zephyr ridden by J. S. Woodsworth that will blow away all our problems. Mr. Woodsworth at the moment is very much in the Public Eye, and on page eight he forms the subject of the first ot a new series of three-minute sketches by R. T. L. As Mr. Woodsworth’s new Commonwealth Party favors monetary reform, added interest is given to the articles by G. G. McGeer and A. F. W. Plumptre on currency, credit and inflation. On page eleven, Mr. Plumptre answers Mr. McGeer on the last-named subjects.

Bad men from the United States have frequently crossed the border to try their luck in Canada. With few exceptions they have spent considerable time here —in government owned and operated hostelries. Back in 1906, Bill Miner, who at that time had a longer record of crime than the Mounted Police had of crime detection, arrived in the Canadian West and held up a C. P. R. train. The result was one of the most amazing man-hunts recorded in the police archives. Vernon LaChance, on page thirteen, tells the story. And no greater tribute has been paid to the Mounted than that uttered by one of Miner s confederates as he was being escorted to prison: “You may think it funny, cornin’ from me, but I certainly admire the way you boys do your work.”

(T LATELY, in certain United States publications of wide circulation, large handfuls of mud have been flung at Great Britain in connection with war debts. The opinions of these propagandists are not shared by a large section of the thinking public of the United States, but they do inflame and distort the views of the nonthinking masses. In our next issue, Lieut.-Colonel George A. Drew will tell some truths about war debts.

We’d like to tell you a lot more about our next issue, but we've simply got to get in the news that Maclean's has secured a new series of short detective stories by E. Phillips Oppenheim. They will commence in an early issue. 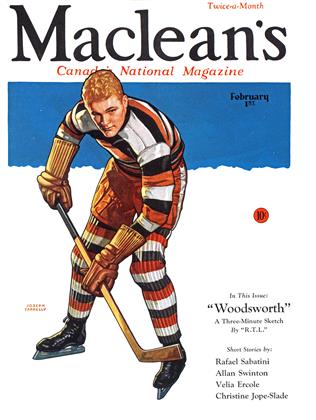