THE MAJOR—he had been Major Henry Peck, of the 89th, for four long, bloody years, and so would always be “Major” to his friends—was fed up with Walker. This Thursday night, as he rode down in the elevator from the splendid apartment on the third floor and strode through the lobby of the Brockley Arms and out into the pleasant twilight, he was thinking of Walker and resolving, for the tenth time, that tomorrow would see the end of their association. Tomorrow he would say good-by to Walker.

“Not human,” muttered the major. “A stick, a stone, a ruddy cigar-store Indian. If I have to look at him one day longer, I swear I’ll go mad. Thank the Lord I’m clear of him tonight, and when I go back I can enjoy my book and pipe in peace for one evening without all this blasted, ‘Yes, sir’ and ‘No, sir,’ and ‘Certainly, sir.’ Gentleman’s gentleman—huh! Wooden image!”

The major mused with much relish on some of the disagreeable things he would like to do to Walker. If only he’d had Walker under him in the old days of the 89th; if Walker had been his batman. Oh, yes, Walker would have learned to look smart and step lively. Walker would have learned to smile, to move that stiff visage of his into a semblance of mirth, to cultivate a sense of humor. The major wondered how it had happened that, with so many pleasant fellows about, he had become associated with Walker. It was Captain Jimmy Parkes who had brought them together. “Just the man for you, major; you’ll get along splendidly with him.”

The major took a fresh grip of his yellow gloves and walking stick, shoved his low-crowned derby hat up from his brown forehead another half-inch, squared his shoulders and marched downtown, preparatory to giving St. Catherine Street a treat. Tall, erect, grey at the temples and bronze of face, the major was never a man to go unnoticed.

He turned in at the comer store of Larkin, the tobacconist. “Special Mixture, sir? Yes, sir.”

^The major thought of Walker again, groaned inwardly, and tapped with the ferrule of his stick on the blue and white tiles.

The major nodded curtly and strode away.

At another store the major bought some after-shaving lotion and was “sir’d” at least ten times. Again he tapped with his stick and again Walker popped up from the background of the major’s mind, where ahvays he hovered, silent, wooden and inhuman.

“No blood in him,” mused the major. “I’ll be clear of him tomorrow. Can’t stand him a day longer.”

At a taxidermist s store, the major stopped to admire some sporting rifles in the window. Splendid pieces, he decided. He d purchase one as soon as he’d got clear of Walker, and go off to the woods for a fortnight or so. He thought of broiled partridge, moose steak and venison, camp fire, pungent wood smoke, trees all about.

"THE MAJOR turned his head and I stared at a shabby down-andouter who stood obsequiously, battered hat in hand, a few feet away, as if fearful that his tatters and general uncleanliness might, even at that distance, give some contamination or other to the major’s sartorially elegant person.

“Kennedy! by gad! Of course, I know you. Best batman I ever had.”

The major stuck out a firm brown hand. Kennedy rubbed his own grimy paw against his trouser leg, then gingerly shook hands. There was adoration in his tired, honest eyes. A man and a soldier, the major was; one of the best.

“You’re very good, sir,” muttered Kennedy. “I—” He looked down at his disreputable garments.

“Yes, sir. Up against it. I—well, it might sound like the old gag, sir, but, so help me, it’s the truth. I got a chance of a job in Winnipeg if I can be there next week. I can be there all right, all right. I’ll ride the rods.

Done it before this. But I can’t walk into this chap’s office looking as I am. If I do—”

“Right. Lot depends on appearance. Hmm!” The major rubbed his lean jaw reflectively. “Hmm! You’re just a mite shorter than I am, Kennedy. Come along with me and I’ll fix you up.”

Kennedy’s eyes grew wide. He put a hand to his lips, then stiffened, saluted.

“Right,” smiled the major. “Come along.”

Back to the Brockley Arms marched the ill-assorted pair. They passed an astonished clerk and a no less dumbfounded elevator boy. The major got out his keys and ushered Kennedy into the quiet elegance of Apartment 3-A, with its rich hangings, deep Kerman rugs, huge leather chairs, priceless engravings and books galore.

“Have a chair, Kennedy Make yourself at home. Cigarette?”

Kennedy, with the air of a man freshly arrived in Paradise, smoked as if it were all a dream.

“Ruddy totem pole, that’s what. Cigar-store Indian. Be through with him tomorrow. No sense of humor at all. Most peculiar fellow I ever encountered. You know how I was with you, Kennedy, when you were my batman? If you did your job well. I told you so; if you made a mess of things, you heard about it, eh? And that’s the way it should be. Dash it all, if we’re not human to each other we’re nothing at all. We should laugh once in a while and take a joke. But Walker—”

“Did you wish to see me, sir? I was just inside. I couldn’t help hearing.”

A FIGURE — wooden, unbending, of graven visage and basilisk eyes—glided from behind a portière and stood rigidly. The major pressed a hand to his brow, seemed stunned by the unexpected apparition of his loathed familiar. The latter waited stiffly, with a glint in his eyes that the major had never before seen there— as if the man was enjoying a joke hugely but was afraid to laugh outright.

“Is there something I can do for you, sir?” persisted Walker. “I didn’t take my night out as you see, sir. Perhaps some sandwiches or some coffee, sir? I am very much at your service, sir. Maybe a little snack—”

"No— no, thank you. I—I am fixing Kennedy here up with some clothes of mine. My old batman. Fine chap. Going away to Winnipeg. Got a job there. I ’ll look after him.”

The major strode out of the room. Walker moved about, arranging a book here, a curtain there. He stopped at Kennedy’s shoulder.

"Well, just a spot. Thank you. You seem a pretty decent sort.” Kennedy gazed up into the expressionless, mummy-like face I of Walker. “I say,” he whispered, “you’d best watch your step, old chap. The major, he’s a bit fed up on you, says you’re a ruddy cigar-store Indian, no sense of humor nor nothink. An’ he’s the salt o’ the earth, is the major. You couldn’t do better.”

The major, returning garment-laden, put an end to this little tête-à-tête. Kennedy jumped up.

"You have a place where you can put these on, Kennedy?”

“Very good.” The major put the clothes on Kennedy’s arm and slipped a folded-up bill into his hand as he sh it.

“You—you won’t be too hard on Walker here? Won’t give ’im the grand bounce? You’ll let him have another chance, sir?” The major was silent. Walker’s lips— unprecedented phenomenon—trembled ever so little and he raised a hand to still them.

MAJOR PECK closed the door on the elated Kennedy. The major was slow to turn away, and when he did he still kept his hand on the knob. He gazed at the rug for a moment, then jerked up his head and looked full at Walker.

Walker’s wooden face broke into a smile, a warm and pleasant smile.

“Not at all, Peck. I just wanted to prove something to you. Did I?”

“I’m glad. I don’t ever mean to be unkind. Peck. It’s my way, that’s all." Walker put his hands in his pockets and strolled to the window.

“I suppose you won’t want me any more, sir?” said the major softly.

Walker said nothing for a moment. Then he turned and held out his hand. It was warm and friendly, and his eyes were kind.

“Of course, I shall want you. Better understanding now, eh, Peck? Sense of humor and all that?”

The major bowed, stood aside. 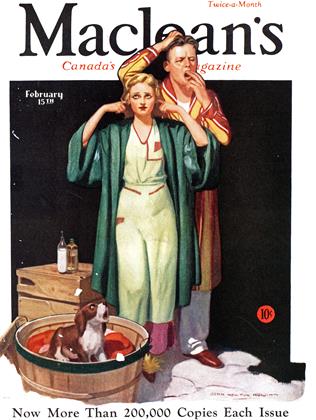