AT SIX O’CLOCK on the evening of November 4, a slimy, foggy evening. Mr. George Dunster, merchant of Dorking, aged forty-five, was thrown

down by a skidding motor car when crossing the Strand, knocked under a bus and instantly killed.

Here is a brief record, gathered from various sources, of how he spent the ten and a half hours preceding his death.

Getting up as usual at seven-thirty a.m., he began to shave in the bathroom adjoining the large bedroom shared by his wife and himself. Staring into the glass, he felt fairly well satisfied with his bristly face, which was square, rather heavy, had an incipient jowl and was dominated by greyish green eyes. The satisfaction ended when, almost for’the first time in his life, lie cut himself.

He heard a soft thump. His wife came, looked horrified and opened a cupboard.

She retired, the more hurt of the two.

Dunster went downstairs, dabbing a handkerchief to his chin. After breakfast he found that the cut had stopped bleeding and, feeling a little guilty, deliberated about apologizing to his wife, but presently shook his head and started for the station.

He had now nine and a half hours to live.

On the way he met a friend, Evans, at an accustomed corner; Evans, of whom, since the man was not very successful, Dunster never thought very much. Looking rather anxious, Evans talked generalities for a moment, then said:

“That thing I was telling you about last week ...”

“It will go through if I can get another sound man on the board.”

lilis was put with a wistfulness which one could not miss; whereupon Dunster, who was very wary, gave him a sidelong glance and withdrew a bit farther into his shell. There were points about Evans that he liked, but the man seemed to lack business instincts. At the same time, the scheme which Evans now referred to was good enough for anybody who had a few thousands to play with. Dunster knew perfectly well that the man’s future turned on it. Also it wasn’t a question of Dunster’s money, but his name only. Yet today—well—Dunster reflected that he’d probably hear of something even better in the next week, and he didn’t see why any sentiment for a man with whom he

happened to play golf should cause him to abandon the general method that had brought him where he was.

\ou shouldn t have difficulty in finding somebody,” he volunteered distantly, and looked straight ahead.

Evans did not answer, nor did he mention the matter again till they reached town and were coming into Victoria. Then:

“No, I’m sorry, but—fact is, I’m loaded up at the moment. Care for a round on Saturday?”

W hen he asked this, Dunster had just eight and a half hours to live.

REACHING his office, he plunged into his mail.

There were letters from Singapore, Batavia, Perth, Western Australia, Cape Town—in all of which places he did business on commission. Working steadily through the pile, he found at the bottom one from his son at public school.

“Dear father: I wrote to mother last week, and asked if I could have a little more pocket money. One thing I need is another chair for my study, and I can get a second-hand one from a chap in the sixth for twenty-five shillings. I’ve tried it and it’s just right, and mine is falling to pieces. Also a lot of persons have been treating me to stodge— it’s generally sausages and mashed this term— and I’ve simply got to treat them back. Now I get a pound a term pocket money, which is supposed to cover everything, but don’t see how I can hold up my end unless I have thirty-five shillings, which is a little over a shilling a week extra. Sausages and mashed cost sevenpence. Mother said you’d have to settle it. but of course if you can’t afford it I’ll get along all right. I played for the third fifteen on Saturday and scored one try. It wasn’t converted. Got my face rather stepped on, but no real damage done.

Mr. Dunster read this, smiled quite amiably, then gave his head a little shake and dictated:

“My dear George: I have yours of Sunday. With regard to the pocket money, I’m sorry I don't see my way to increasing your allowance.

When I wa9 at the school I had considerably less than a pound a week and made it do. You must learn the value of money, and the food at the school is said to be excellent. Later, when you have means of your own, you will see the wisdom of self-control at this early stage of your life. I am glad you are doing so well at games.

Finishing this letter, Mr. Dunster opened his cigar case, found it empty, and dispatched the office boy for a box of Coronas.

When he lit the first, he had just six and a half hours to live.

A LITTLE before one o’clock he went out and started toward his luncheon club. The day was cold, the wind in the east with a spatter of rain. At one point he noted that the traffic was held up, and over the heads of the crowd he distinguished the blue helmets of a line of {Xiliee. Working his way forward, he finally reached the front rank, and came in sight of a straggling procession of hunger marchers, who were being shepherded with Olympian calm by a file of large and impassive constables.

Narrowing his eyes, Dunster watched them the majority pale-faced men, shabbily clothed, with a few weary-looking women whose features betrayed the conflict between despair and flagging resolution. But for the most part, there was just hopeless helplessness.

“It shouldn’t be allowed, Dunster,” said a voice at his elbow. “This sort of thing is directed from Russia.”

“And they actually think they can force their way into the House,” agreed Dunster heartily. "Very disturbing to our standing abroad; they ought to be locked up.” Grotesque banners were now being carried past, banners in which ink and paint had run together. They sagged. “Down with the Means Test.” "We’re British too.” “We want work, not charity.” One read inscriptions like this till the procession tailed out with two mounted police at the rear -glossy horses sleek and shining, the men sitting very’ erect. Law order— discipline!

Abreast of them came a woman—young, with strained face and hunted-looking eyes — carrying a man’s hat in which lay some pence and a few silver coins. Opposite Dunster she stopped, pushing the hat toward him.

“Give us a bob; you won’t miss it.” Dunster, lifting his chin, stared over her head.

At this point he had five hours to live.

AFTER LUNCH—his usual Friday ^ grilled sole, cheese, pint of bitter, and black coffee—he played fifty up, and went to Throgmorton Street to a board meeting of a company in which he was a large shareholder. He liked these meetings, not only because he got a guinea, but also because he was treated with a good deal of deference and what he said very often carried the day. His fellow directors felt—and Dunster didn’t miss it—that here was a sound man, a long range man, whose instincts, backed by experience, were worth a good deal to any company because he didn’t get excited or impulsive but made his points in a cool, deliberate fashion. There was no show about Dunster, yet he could cash a cheque for fifty thousand pounds any day of the week.

The matter now at issue was whether to reduce the dividend or the operating expense, which latter had already been cut fairly fine. The others had their say, then there was a pause and they looked at Dunster, who always liked to wait and come in last of all. It was more effective.

“I think,” said he, “that the employees of this company have been so well treated in the past that they will not hesitate to accept a reduction because it will make them feel more secure in their positions. To reduce the dividend would not in my opinion be wise, as our record for a steady eight per cent goes back to the second year of our history and I am loath to break it; also the saving made by the proposal will supply the dividend shortage, and we would be supported by the best opinion.”

This gained a little murmur of approval. Several directors exchanged nods; there was noticeable a general satisfaction, and the motion was carried with only one dissenter. After the meeting, this man took Dunster by the arm.

“I can’t see it,” he said. “On my word I can’t. What is justifiable may not always be advisable. The shareholders can stand a cut better than our operatives. And there’s always one thing.”

“My dear fellow, I have yet to learn that big business is actuated by motives of that kind. No, no, it’s the economic principle. And you seem to forget that the cost of living is eight per cent less than a year ago, which is the cut decided on.”

What remained to him of life was now exactly two hours.

He walked contentedly back to his office, ran through the afternoon letters, left at five-fifteen, and was fitted by his tailor for a new winter suit. His waist was a shade larger, but that did not worry him, and he fingered the cloth—dark grey with a fine white line—thinking how well it would hang and smiling when the man told him he would never wear that stuff out. He wouldn’t. Next, at the haberdasher’s, he ordered some shirts and fancy socks, then took his way along Fleet Street, walking because he needed exercise. Opposite a florist’s where his wife sometimes dealt he paused, examined a bunch of glowing carnations, priced them, deliberated, shook his head and marched on.

Ten minutes later he was killed.

NOW, what one would like to emphasize is that Dunster, since he got up that morning, had led what was for him a perfectly normal life; one actuated by his natural instincts and reason, exactly such a life as was being led by a multitude of other men, with no fits of passion, revolt, resentment, remorse, despair or elation. The day up to six o’clock was like a thousand other days.

Yet all the time, whether shaving or talking to Evans, or writing to his son or smoking, or watching the hunger marchers or addressing the board meeting or ordering shirts, he was balanced on the lip of the Unknown; and the thing that interests one is how he would have comported himself had he entertained the vaguest doubt as to the continuity of his own life, because he was in a position to act very differently.

And the other point—which goes with it— is how would your actions and mine be affected were we sane enough to have a few doubts about the continuity of ours?

I believe we could transform this world. 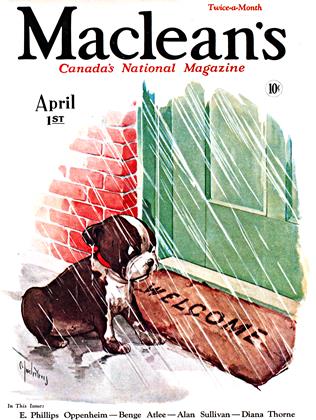