DEATHLESS, apparently, is the cry for reciprocity. Reciprocity with the United States. Born of struggle against annexation, cradled in national distress and near-rebellion, it has dominated our fiscal history for three quarters of a century, has been the cockpit of countless party battles, and now returns dramatically as a major issue. What is reciprocity? What is the history of this question which, figuring largely in the record of our relations with the United States through seventy years, defies permanent rejection? A brief review may be useful.

Reciprocity’s story goes back to the repeal of the Com Laws in England in 1846. Up to that time, Canada s chief markets were in the United Kingdom. Canadian wheat and flour entered British ports under nominal duties, so Canadians bought wheat in the United States, turned it into flour, shipped it to England profitably. Millers, merchants and shippers prospered, capital investments and exports mounted, Quebec and Montreal became ports of consequence.

Then the Com Laws were repealed, and with them went Canada’s prosperous business in flour and wheat and lumber—almost everything that made for the country’s development. Making matters worse, the British navigation laws closed the St. Lawrence River to foreign ships, prevented Canadians from gaining new markets, intensified distress. Nearly half the merchants of the country were forced into bankruptcy. Within a few years commercial and agricultural activities were palsied, people fled from farms and crossed to the United States, cash became almost unavailable, and the population resorted to barter.

WHAT FOLLOWED is history. There were outbursts against Britain, the riots of 1848, the annexation manifesto of 1849. The burning down of the Parliament Buildings in Montreal was due primarily to hatred of the Rebellion Losses Bill, but back of the anger of the mob was resentment against England’s commercial policy. Men of English blood, not Frenchmen, attacked the portrait of Queen Victoria—that portrait which, rescued by Sir Allan MacNab, now reposes in the Parliament Buildings at Ottawa, the smudge of flames still on it. And the same Englishmen, or men of the same blood—among them J. J. C. Abbott, who lived to become Prime Minister— were those who signed the annexation manifesto of 1848. A few years before, they had stood against Papineau and

“The reversal of the ancient policy of Great Britain, whereby she withdrew from her colonies their wonted protection in her markets, has produced the most disastrous effects upon Canada . . . Crippled, therefore, and checked in the full career of public and private enterprise, this possession of the British Crown—our country— stands before the world in humiliating contrast with its immediate neighbors, a nation fast sinking to decay.”

Two alternatives were before the country. One was annexation, the other reciprocity. The latter—fortunately, perhaps, for our British connection—came in 1854.

It came with preservation of Canada’s self-respect. Francis Hincks, well aware of the United States desire to use Canadian canals, wrote to Washington:

This note, coupled with a plain hint that Canadian canals would be closed to the United States, plus the skilful diplomacy of Lord Elgin, got results. After prolonged negotiations, a fisheries dispute was adjusted satisfactorily and a trade treaty provided for free interchange of a long list of natural products.

Mackenzie, but now, their country faced with commercial extinction, they sought union with the United States and declared :

Then, in 1866, came termination of the treaty. Under it, the United States had sold Canada large quantities of manufactures, had exploited the fisheries of Canadian waters. Despite this, and notwithstanding that some of their ablest leaders, including President Lincoln, believed in the treaty, Americans tcx^k the ground that the agreement was too one-sided, insisted ujxm its abrogation. Their real reason was prejudice against Canadians for their supix>sed sympathy with the Confederate States during the Civil War—that and a belief that the repeal of the treaty would sooner or later force Canada into annexation. Sir Alexander Galt summed it up as follows:

“If there was one thing more than another, apart from the irritation growing out of the events of the late war, which instigated them in abrogating the reciprocity treaty, it was the belief that they could compel us into a closer political alliance.”

WITH RECIPROCITY gone, Canada once more experienced gloom and apprehension. No one sought to deny the advantages of free access to the American market, and, while duties were raised against United States manufacturers and desperate efforts made to help agriculture through a home market, a few years saw both British and Canadian authorities laboring at Washington for reciprocity’s revival. They labored in vain. The Republic had definitely set its face against reciprocal trade with Canada, and the story of the succeeding forty years is simply the story of Canadian pilgrimages to Washington, of vain and impotent diplomacy, of increasingly harsh tariff treatment by the United States. Here is the record, chronologically:

An agreement made by Galt and Howland with the Ways and Means Committee of Congress in 1866 to accept a scheme of concurrent legislation instead of a treaty of reciprocity, resulted only in George Brown’s resignation from the pre-Confederation Coalition Ministry.

In 1868, when the first tariff of the Dominion was adopted, the schedules contained a statutory offer of reciprocity in natural products, this offer remaining a feature of all Canadian tariffs down to 1894.

In 1869, the Hon. John Roas, Canadian Minister of Finance, offered Washington what amounted practically to complete free trade between the two countries, plus increased Canadian privileges in our fishery waters and canals. The offer was rejected by the Administration of President Grant .

In 1870, Sir John Macdonald offered the United States access to Canadian deep-sea fisheries in return for a renewal of the Treaty of 1854. The United States reply was that the treaty of 1854 had proved unsatisfactory, that its renewal would not be in its interests.

In 1874, George Brown, acting for the Government of Alexander Mackenzie, negotiated an arrangement which put lumber, coal, and all farm products on the free list, reduced duties on a substantial list of manufactures. Of preponderant advantage to the. United States, Congress nevertheless killed it.

“A national policy of protection will prevent Canada from being made a sacrifice market, will encourage and develop an active interprovincial trade, and moving, as it ought to do, in the direction of reciprocity of tariffs with our neighbors so far as the varied interests of Canada may demand, will tend to procure for this country eventually reciprocity of trade.”

SO, THROUGH the years, ran the record.

The National Policy prospered, had prospered Canada, but Canadian statesmen continued to look to Washington. This, despite a persistent United States penalizing of Canadian trade, despite the mounting schedules of McKinley and Payne-Aldrich tariffs.

Then, in 1911, came a new development. Influenced by the depression of 1907, the Republican party, through Mr. Taft, came out for reciprocity. There followed the memorable negotiations with Mr. Fielding, the long, bitter fight in Parliament, the schism in the Liberal party, the historic election of September, 1911, the combined dramatic defeat of both reciprocity and Laurier.

The unforgettable scene in Parliament when Mr. Fielding introduced his reciprocity pact illustrated strikingly the Canadian temper. Tories, perfectly consistent with their party’s tradition, joined their cheers to Liberals. One by one Mr. Fielding named the items affected.

“What about wheat?” called Conservatives; and when Mr. Fielding answered “free.” Tory and Grit thumped their desks in unison.

Whatever the rights or w'rongs of the subsequent Conservative change, which

gradually became bitter hostility, it had little to do with reciprocity’s principle, but with the details of a particular treaty. It was opposition on national and political, not on commercial grounds.

The weakness of the 1911 treaty—the weakness which Canadian Conservatives saw in it—was that it could be abrogated at will by either one of the contracting parties, thus providing no guarantee of stability and offering threat of sudden dislocation. Upon this ground, reinforced by foolish political utterances by men like Mr. Taft and the late Champ Clark, the agreement was rejected.

Perhaps subsequent history vindicated that rejection. When Woodrow Wilson became President, there came the WilsonUnderwood tariff with its offer of reciprocal free trade in numerous farm products. Canada accepted the offer. But in 1920, when this country had built up a huge export trade to the United States in livestock and other farm products, the United States Senate scrapped the agreement without warning, plunged Canadian agriculture into a desperate depression. One of the hardest blows ever struck at farming progress. in Canada, it temporarily demoralized our export trade.

What has since happened is contemporary history. There came from Washington the Fordney-McCumber tariff, all but barring Canada from American markets; came later

the Hawiey-Smoot tariff, completing whs# the Fordney-McCumber tariff had begun Everything that had been built up unde the Wilson tariff was swept away, and more

This United States action was taken at ¡ time when Canada was Uncle Sam’s bes customer. In 1930, Canada’s imports frort the United States reached the enormous total of nearly $1,000,000,000; yet this was the year when the Hawiey-Smoot tarif placed the last prohibitive brick upon the American tariff wall. An offer by Mr. Mackenzie King, in 1923, of some better arrangement was not even considered; the lowering of Canadian duties on United States farm implements and mining machinery was completely ignored.

Such is the seventy-five-year-old story of the struggle to secure better trade between two friendly nations living side by side on this continent. It is an extraordinary story; certainly an extraordinary background for the latest reciprocity proposal which presently will be considered at Ottawa and Washington. To say whether this new offer should be accepted or rejected is not the purpose of this article, though one thing may be said. It is that, looking back over the years, with their succession of reciprocity defeats and revivals, it would almost seem that some force stronger than politics or mere national selfishness keeps alive the determination of the two nations to engage in profitable trade. 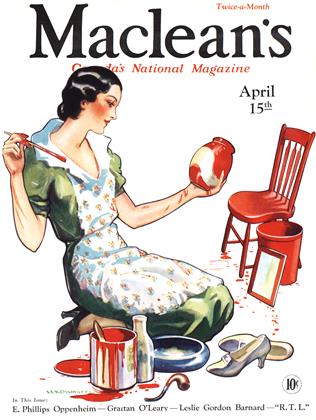