Hundreds of thousands of dollars are lost annually in Canada through careless investment. Fraudulent and worthless securities are being constantly poured on to the market to trap the unwary. A general observance of this simple maxim will assist in the reduction and elimination of this economic waste— "BEFORE YOU INVEST—INVESTIGATE”

THE MORTGAGE lending companies, which include loan corporations, trust and insurance companies, form an integral part of the financial structure of Canada—a structure that has withstood the shocks of the past four years of economic adversity in a manner that has commanded world-wide attention and admiration. The loan and trust companies have long had a record of conservative management that stands them in good stead during a period such as that through which we are now passing. That this conservatism in management is very real is evidenced by the fact that no loss has been sustained by the public which has loaned funds to loan and trust companies incorporated under the Dominion or Ontario laws since the Dominion loan and trust companies ac*s were drawn in 1914.

The interest of Canadian investors in the loan corporations and trust companies which operate from coast to coast is two-fold. First, there is the interest of those who, either by depositing their funds in a savings account or by purchasing savings certificates bearing a fixed rate of interest for a [xriod of from one to five years, have supplied funds to these companies for the legitimate purjx>ses of their business. Secondly, there is the interest of investors who, by supplying initial capital for these companies or by subsequent purchases of stmk in the open market, have an equity in the assets of a trust or loan company.

Both from the standpoint of the depositor and of the stockholder, the record of Canadian loan corporations and trust companies has been highly satisfactory. The records are comparatively free from failures for many years, and the mortgage lending companies of this class have passed through previous |>eriods of economic stress with a strengthened prestige that has resulted in increased business. Where losses have been incurred they have been largely local in character.

"THE HISTORY of loan companies in I Canada covers a peri<xl of over ninety years. In 18-15 loan companies were incorporated in Ontario in the form of building and savings societies, and an act providing for the regulation of such societies was drawn in 18-16. Even before this time small local societies had been started in Ontario towns a colonial development of the terminable building six’ieties which were active in England in the 1830’s. There were no banking facilities in many Ontario towns when the building societies were first formed, the pioneer settlers needed assistance in financing the construction of their new homes, and tradesmen required a suitable depositary where surplus funds would draw interest. As a result of a definite need, building societies were formed in many Canadian towns, but the results were not always satisfactory to those who provided the capital or to those who secured loans; and it was only after many unsound practices were eliminated and protective legislation was effected that the present strong structure of loan corporations became jx>ssible.

by loan companies. For these functions special departments and specially trained staffs are maintained to carry on the wide variety of duties entailed. The trust company may receive money in trust and act as agent, executor, trustee, administrator, receiver, liquidator and in other capacities. From these activities, trust companies derive the greater part of their revenue, whereas the revenue of loan corporations comes largely from income from investments, of which mortgage loans are the most important item.

FEDERAL and Ontario legislation governing loan and trust companies is framed for the greatest possible protection to depositors, and since 1916 regular inspection of those companies operating under a Dominion or Ontario charter has been maintained. Practically all the large companies and many of the smaller ones are subject to this inspection, with the greater number of companies operating under the jurisdiction of the Ontario Registrar of Loan and Trust Companies. The companies operating in Western Canada under provincial charter are not subject to the same restrictions, and it is in the West that the few recent difficulties have occurred. There seems to lie practically no possibility in Canada of any such condition prevailing as that in the United States, where some eighty per cent of building and loan societies have been seriously affected by mortgage conditions.

Under the Ontario Loan and Trust Corporations Act. a loan corporation is permitted to invest money raised by the sale of stock, by borrowing from the public, and undivided surplus profit in certain specified forms of investment. These include first mortgages on real estate in Ontario; securities of. or guaranteed by. the Dominion of Canada and any of the provinces, the United Kingdom or any other government which has paid interest regularly for ten years; debentures, bonds, paid-up stock, etc., of Canadian municipalities and school districts; Canadian chartered banks or corporations incorporated in Canada. Trust companies are permitted to invest in mortgages, government and municipal Kinds; the debentures of corporations which have paid preferred and common dividends for live years preceding date of investment in debentures; in preferred stocks of corporations which have paid regular dividends upon stocks or common stocks for not less than five years preceding; and common stocks of any company that has paid common dividends of not less than four [XT cent per year for the preceding seven years, or. in the case of no par value shares. $4 [XT year for the same period.

"THE BORROWING POWERS of both I loan and trust companies are restricted under the Ontario Act. Borrowing may be

carried on by the acceptance of demand deposits on which four per cent interest is paid at present; or by the issuance of debentures which mature in one to five years and on which five per cent is being paid by the majority of companies at the present time.

The loan company, having two classes of obligations to the public—deposits which may be withdrawn at any time and term deposits which are payable at specified periods—should have a certain proportion of its assets in liquid form such as cash, highgrade bonds and call loans secured by good collateral. The Ontario registrar considers that the ratio of liquid assets to demand deposits should not be less than forty per cent, and many companies have a much higher ratio. The average for Ontario companies was 60.7 per cent at the end of 1932, and the tendency in the past year has been to improve liquid positions.

This improvement in liquidity has been made possible by some increase in deposits during 1932 and a practical cessation of investment of funds in mortgages. The position of present mortgage investments constitutes the chief problem confronting loan and trust companies today, and it is generally true that losses must be taken, although the mortgage situation in Canada is not nearly as serious as it is in the United States. As a general rule, the loan and trust company in Canada has been a very conservative lender. Those companies operating in a restricted local field have secured the cream of mortgage security in their particular area, while most of the larger companies which maintain offices throughout Canada have extended their operations only after thorough study of the possibilities of the new territory. The conservatism of the Canadian loan and trust companies in the past will be amply repaid during the next year or so, and at the present time there appear to K' few companies that will not be able to absorb such losses on mortgages as must be taken. Chief losses will be on mortgages on farms in the prairie provinces.

Shares of comparatively few loan and trust companies are listed on Canada stock exchanges, but generally some local market prevails. Since the trading in most stocks of this class is not active, there may be fairly wide fluctuations in price between sales, but generally the loan and trust company stocks are closely held and there is no large volume of shares available. As a

class, the shares that are listed have held up remarkably well since 1929 and offer possibilities for long-term investment.

Earnings tended to decline in 1932. while increased taxation and provision for losses on investments reduced the amount of profit available for dividends, with the result that in most cases dividends have been reduced in recent months. Improvement in general business conditions throughout the country, withdrawal of provincial moratoriums on mortgage investments, increase in building and construction, will all tend to improve earnings.

The record of the loan and trust companies after previous periods of economic depression indicates that these companies may again repeat previous history to the advantage of their shareholders. 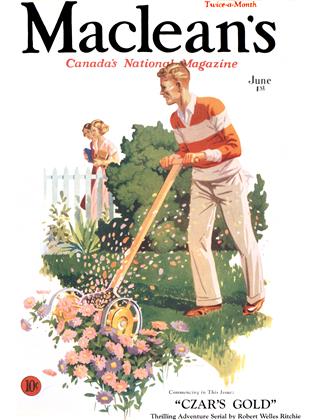